RECENTLY MINTED Negro-worshipper Ralph Northam cut a statue of Bobby Lee in half and put it in cold storage for future generations of mixed-raced cretins to p— on.

They say the Great Replacement is a myth but better to believe your eyes. They are removing our history and putting theirs in its place — though theirs is a sorry history, one not worthy of the name, and they have to lie about it all the time.

They were going to remove an old time capsule placed under the statue in 1887 by much better people than they, but the lazy bastards couldn’t even find it, so they gave up, this not being a hard-working bunch. Which is good; there’s no way these evil monsters should ever get their mitts on something so priceless. Let it sit in the Earth until a better Folk arrives to rescue and cherish it. (Look at the top of this page: “A New People.”)

Crews in Virginia ended a daylong search Thursday after they were unable to locate a 134-year-old time capsule state officials believe is buried in the pedestal of a statue of Confederate Gen. Robert E. Lee that towered over Richmond for more than a century.

State officials were scheduled to remove the 134-year-old time capsule from the cornerstone a day after the large Confederate statue was taken down. But after removing more than half a dozen large, heavy stones, crews were unable to find it.

Northam has been seen bloviating and uttering the usual bromides:

“This monument and its time capsule reflected Virginia in 1890 — and it’s time to remove both, so that our public spaces better reflect who we are as a people in 2021. The past 18 months have seen historic change, from the pandemic to protests for racial justice that led to the removal of these monuments to a lost cause. It is fitting that we replace the old time capsule with a new one that tells that story.”

Ah, the New Virginia. Used to be they’d say Virginia is for lovers, but now Virginia is for Congoids and race-mixers and non-White invaders and their nooseworthy collaborators. And the cause isn’t lost, sir. When we come to power we will build new monuments to the cause, and we will arrest everyone who had anything to do with removing this statue, including the crews.

Historians believe a copper time capsule was placed in the cornerstone of the Lee pedestal on October 27, 1887. Records from the Library of Virginia suggest that 37 Richmond residents, organizations, and businesses contributed about 60 objects to the capsule, many of which are believed to be related to the Confederacy.

Dwell deep in the Earth it will — until comes a better time, a better people, a new order, and a new way of life.

Apparently this guy’s specialty is Negro-loving which, in these debased times, should be a lucrative racket for him — for a while.

And of course we are in for tectonic transitions.

“The 1887 capsule we will remove this week offers us an incisive bite of time when the Lee Monument was erected. Now in 2021, this capsule gives future Virginians artifacts of the tectonic transition that has happened to us,” said DiPasquale. “The pedestal marks the past and has a new message for the future: we, all of us, are the New Virginia.”

Not us — we want no part of it. Your future leads nowhere.

The statue was hoisted off its pedestal on Wednesday, more than a year after Governor Ralph Northam ordered its removal in June 2020 after protests over racism and police brutality erupted across the country following the police killing of George Floyd in Minneapolis last year.

“It’s time to say to the world, this is today’s Virginia, not yesterday’s. And one day, when future generations look back at this moment, they will be able to learn about the inclusive, welcoming Commonwealth that we are building together. I encourage Virginians to be part of this unique effort to tell our shared story.”

What bitter bilge. Among the knick-knacks and tchotchkes they placed in the new time capsule are:

The 39 artifacts are intended to reflect the cultural moment in Virginia’s, and the nation’s, history. In the past year and a half, Virginia had a deep reckoning with racism. Protests for racial justice, sparked by the death of George Floyd, led to the removal of statues originally placed to memorialize those who fought to continue a way of life that enslaved other human beings.

They call them “artifacts” but that’s a tad highfalutin’ for this cultural toilet paper. Apparently they didn’t go with the discarded cans of 40s, the price tags for all the emergency room visits for the victims of endless Black crime and violence, the various kinds of “hair reaves” (Ebonics for “weaves”), and pictures of the burnt-out buildings in the Black ghettos.

Apparently we have “traversed a deep reckoning with the racial past” and the new time capsule will give us a “snapshot in time.”

It is indeed a snapshot of our time, the whole sordid mess. And when the great White future begins its reckoning, we will ritually desecrate it with all the dignity it deserves, and then leave it, and them, to the wolves.

Now the Little White "Walk Man" on Traffic Signals Is "Racist"
Aimée Terese -- A Witty Marxist and Fetching Thorn in the Side of "Woke" Liberals
Civic Improvement
Dismantling Whiteness
Dr. Seuss Was a "Racist," Oh My!
The Fall of Charlottesville
Baltimore: Confederate Statues Removed in Dead of Night, Replaced With Image of Pregnant Negress
Georgetown Law School: Even Anti-Racists Are Racist
Tags:"woke" liberalismConfederate StatuesRobert E. Lee

A small victory in Philadelphia but the jew-tool mayor isn’t giving up:
JUDGE RULES PHILADELPHIA CAN’T REMOVE A CHRISTOPHER COLUMBUS STATUE
“It is baffling to this court as to how the city of Philadelphia wants to remove the statue without any legal basis. The city’s entire argument and case is devoid of any legal foundation,” Patrick wrote.
https://www.npr.org/2021/08/18/1029077566/christopher-columbus-statue-philadelphia-judge

Philadelphia to appeal decision to block removal of Columbus statuehttps://whyy.org/articles/philadelphia-to-appeal-decision-to-block-removal-of-columbus-statue/ 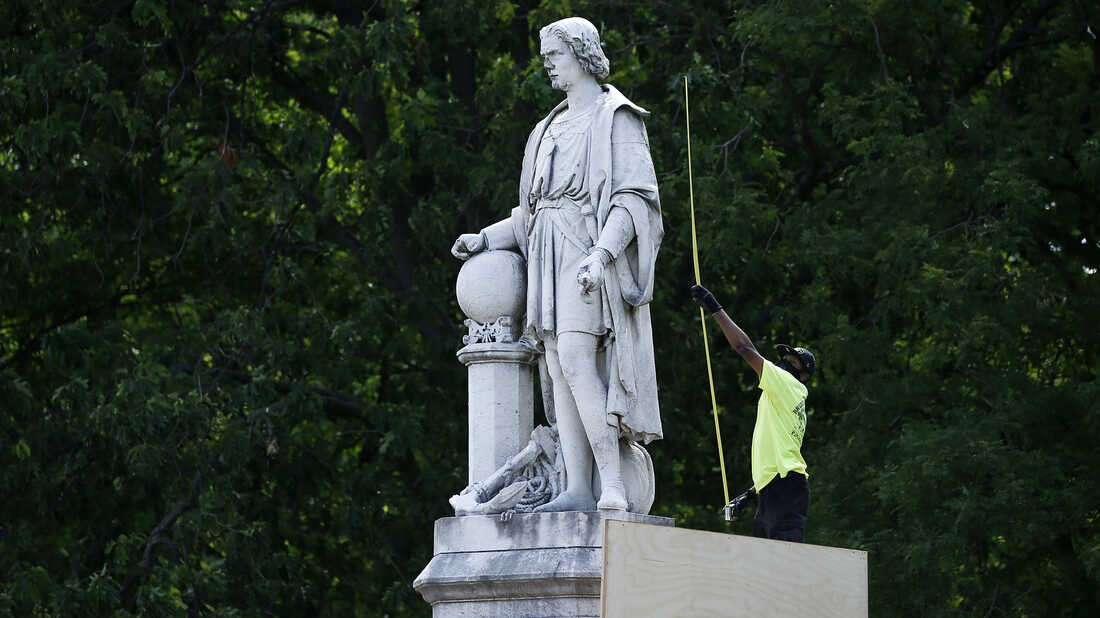 Where was the “Sons of Confederate Veterans” (yellow bellied cowards’) Where was “The League of the South” (yellow bellied cowards)”, other “Southern” “White Nationalist”organizations and press. Where were the White descendants of these brave White men when men were men and not yellow, cringing, pathetic cowards swapping “brave” emails and starting useless websites. Not a peep, all these “good ‘ol boys” who talk the talk but never walk the walk. I’m sure our white ancestors are hiding their heads in shame at their descendant’s lack of courage who are even afraid to name the jew enemy or even worship some ephemeral jew-in-the-sky. All the bragging websites and emails in the world will not topple the jew, and they just laugh at us cringing yellow ineffective Whites. I remember when Duke… Read more »

That magnificent “before” photo doesn’t do Northram and his collaborators’ anti-White misdeed justice. 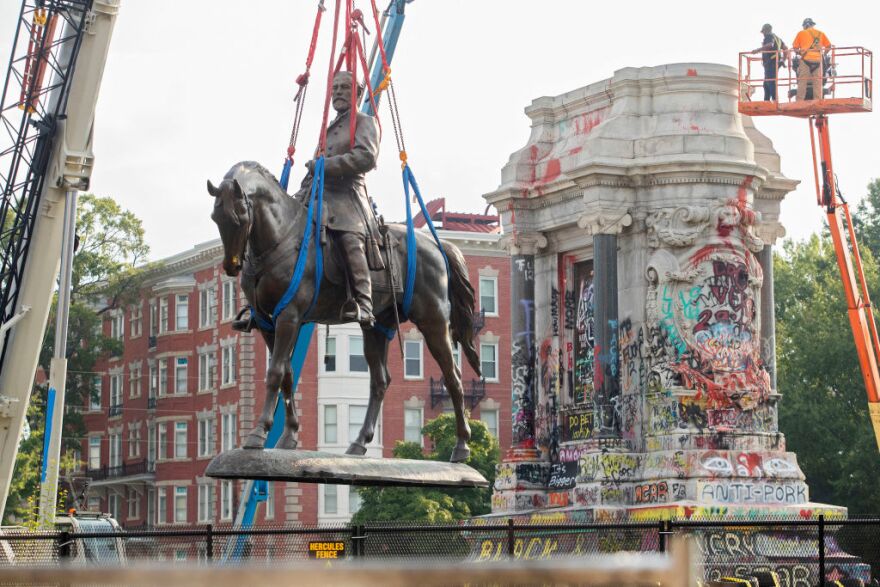 A statue of Robert Lee was removed from a Dallas park in 2017.

The race mixing Wigger generations want this country to mirror the racial cauldron of the Middle East. These people are the only open-ended White race mixing generations in the history of North America (1990s forward). 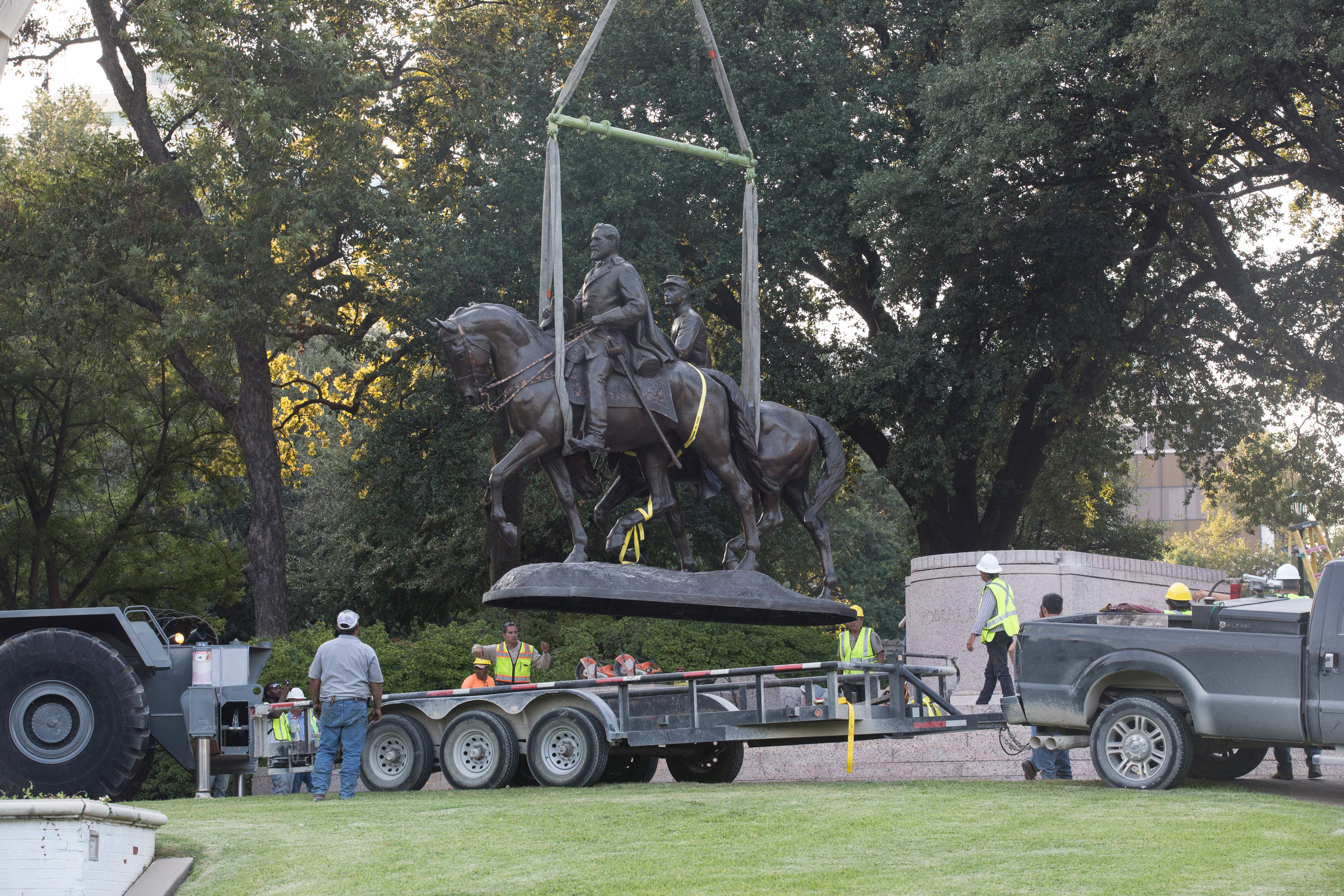 Rockwell’s Ghost: You rapped the South very hard. Your scathing insults and calumny is standard language in modern racism. As a 1960s racist Southern Boomer, I can tell you with certainty that we could have given this new era of racism a severe lesson in what it takes to go outside and confront the enemy with guns, knives, ropes and fire. Our blood-based kinfolk racism so attracted and impressed the Federals on the Potomac that they reinvaded the South 100 years after the first time. We fought to maintain White separation and protect our birthright. We were on our own time. The kinfolk states received no help outside Dixie Land. It was the last strong chance to turn things around. Like our Confederate ancestors, we were smothered with Federal tyranny. We… Read more »

It’s clearly a matter of youth versus experience. I have been saying it for years, when one stands and fights they will find no one willing to back them, no one at their side. There have been many examples of this like Robert Matthews, Randy Weaver, Gordon Khal, Richard Butler and the Branch Davidians who were left no choice. Who stood for them? Who stood with them? Who came to their aid?   Instead, the Jew media drummed up their own white kin’s hatred for these men. Instead, white people cheered on the Jew-gov’s murderous assaults. I heard them cheering on the Jew-gov’s murderous, Waco “holocaust.” “Yeah boy! We’re gonna’ have us a Texass Bar-B-Q!”   Later these same execrable white slimes took to the knee for a worthless… Read more »

I dream of the day when no Jew or Kneegrow will fear white reprisals while walking down the street. I dream of such a day because that will be the day there will be no Jews or Kneegrows.