THERE ARE much better explanations for the deaths at Indian Residential Schools than those given by the Jewish-controlled and government media. (ILLUSTRATION: photo of Royal Inland Hospital in Kamloops)

Over the last two weeks of June, 2021, Canadian radio and television have been going hysterical over the discovery of 200-plus century-old bodies of Indian children found at Kamloops Indian Residential School. As any sane person can see, the hysteria is completely uninformed. Almost all of the “explanations” given by the hysterical media imply that the children were murdered by the White, Catholic supervisors at the residential school. Where is the evidence for this? There is none. The overwhelming point is that the accusation is blatantly defamatory and that it has already led to the burning down of two churches in southern British Columbia and vandalism of churches in other locations.

Who are the defamers? Obviously, they are Canada’s media, particularly the CBC. We offer four much more logical explanations for the deaths:

One explanation is that, for a number of reasons, all of Canada had an alarming child mortality rate at the time of residential schools. In other words, non-Indian children died in very high numbers all across Canada. Most of those children are now buried in cemeteries, and if skeptics want to unearth bodies to prove that point, they can go to non-Indian children’s graves all across Canada. There are at least tens of thousands of children’s bodies that could be unearthed. Are they “murder victims” too? What about going after the churches that these children and their parents attended, or the schools these children attended? What about blaming God for all of the deaths? Do hysterical Canadians want to blame the churches that stand beside the non-Indian children’s graves for the children’s deaths? The Canadian child mortality rate was very high in the early 1800s and remained high into the early 1900s. Some of the reasons for that are biological and some are immigration-related, and there was a significant increase in deaths all across Canada in 1917 and 1918.

For an important, but largely unknown, immigration-related reason, see this:

According to Professor Mark Humphries (Wilfrid Laurier University) the world-wide [“Spanish”] flu which killed more than 50 million people originated in China in the winter of 1917-18. This was near the end of World War 1. His research looks at three often-cited origins of the disease : (1) The U.S.; (2) France and (3) China. He concludes that China is the site that makes most sense.

The insights provided by Professor Humphries in his 2014 research should have accentuated the absolute necessity for health checks on immigrants/migrants coming to Canada — particularly at this time of the Corona virus. A large percentage of Canada’s current immigrants come from China and India whose environments have been described respectively as an “environmental catastrophe” and an “environmental disaster”. Let us translate for the benefit of uninformed Trudeau, ethnic Chinese NDP MP Jenny Kwan, NDP leader Jagmeet Singh and a host of equally uninformed MPs and other politicians: The terms “Environmental catastrophe” and “environmental disaster” mean “breeding grounds for viruses”. A large percentage of Canada’s immigrants come from those breeding grounds.

In fact, even in 1915, well before the so-called “Spanish Flu epidemic” began, 27% of the population died in Canada as young children. One can assume that this number was even higher amongst the Indian population. (See statista.com) A second explanation is that the Spanish Flu was entrenched in the town of Kamloops and had almost certainly spread to the Kamloops Indian Residential School. According to a news article published last week in Kamloops This Week, the Spanish Flu had by 1918 infiltrated the small town of Kamloops (which had about 4,000 people in 1918).

A third explanation is that Canada’s lazy, biased media, particularly the hysterical pot-headed CBC, have suppressed important facts and created a false “reality” which many Canadians have been deceived and socially pressured into accepting. In fact, many Canadians have been convinced that looking for more believable explanations is wrong. That false reality fits with the CBC and private media’s perverted mission to portray Canada’s 400+ year-history as a time of endless crimes. It probably would have taken only minimal contact between someone from the town of Kamloops and someone from the Indian Residential School to start an explosive outbreak of Spanish Flu at the Residential School.

The following sentence from a 1918 Kamloops Standard-Sentinel article summarizes the wide effect of the Spanish Flu on the town of Kamloops:

Most homes in Kamloops had at least one case of Spanish Flu and, in some cases, entire families were laid up.” A fourth explanation for the 200+ graves at the Kamloops Indian Residential School is that the 1890 epidemic of Asiatic/Russian flu and later epidemics probably had had similar effects on the town and on the Kamloops Indian Residential School. In other words, the Asiatic/Russian flu had probably killed a significant number of children at the Indian Residential School. It is also quite likely that in all the epidemics, the supervisors at the Indian Residential School were overwhelmed by the epidemics and had to resort to rushed burials to control the spread of the diseases. In fact, a 1918 article that is cited in the “Kamloops This Week” newspaper article of last week supports that idea. That article states that both Municipal and Provincial authorities had been literally “overwhelmed” by the Spanish flu. As hard as it is to believe, in the past few weeks, not one of the media has even mentioned these four very important and much more believable explanations for the 200+ graves at the school.

The overall point we want to make about the reporting on the discovery of the bodies at the Kamloops Indian Residential School is that Canada’s media are extremely biased, lazy, and irresponsible. All are clamouring for an apology from the head of the Catholic Church, Pope Francis. If anyone should be apologizing to Canadians, it should be the loutish Canadian media. After all, Canada’s federal government gave our private media hundreds of millions of Canadian taxpayer money in subsidies in the past two years to keep them afloat. Shouldn’t Canadians expect some sense of responsibility in return? Apparently, the subsidized media don’t think so. Therefore, to re-set their collective brain, it would be appropriate now for Canadians to start a class action suit to recover the hundreds of millions in subsidies.

Let’s be blunt: For their irresponsibility in the past two weeks alone, both Canada’s private media and their perverted CBC counterparts deserve to be thrown out on the street. As for the CBC, which continues to receive close to $2 Billion per year in subsidies from Canadian taxpayers, it has terminal cultural cancer. In its reporting on the Kamloops incident, it has completely betrayed its founding duty to protect Canada’s majority population. It deserves the utmost contempt of all Canadians. All CBC employees should have long ago had their life-support terminated. In fact, long ago, Ottawa should have converted CBC buildings to manure storage. As a food-generating measure, the manure could have been distributed to urban residents who wanted to fertilize their gardens. CBC staff should have been forced to fill bags with manure. After all, they have been filling the “news” bags with manure for years. In fact, filling bags with manure would be the first productive work that most of these people had ever done in their lives. Also, storing manure in CBC buildings would would have also be a much more useful, appropriate, and superior use of the CBC’s building space.

As for Canada’s private media, many of them have long created their own financial problems as a result of also betraying the trust of the public. In other words, many Canadians have lost confidence in their reporting and regard them as mere hacks. Like the CBC, they have spent most of their time trying to convert Canada’s population to extremely media-biased views rather than telling the truth.

The Canadian Encyclopedia has published, on epidemics in Canada:

The Spanish flu eventually killed about 50 million people worldwide (although estimates range from 20 to 100 million). In Canada, about 50,000 people died, and all parts of the country were affected. The timing of this flu’s development was critical to the eventual success of the virus because there were many people traveling from one part of the world to another. The 1918 flu is widely recognized as the most devastating pandemic in history.

The name “Spanish flu” emerged as the result of media censorship by the military in Allied countries during the war. These countries suppressed the reporting of the viral infection and death of soldiers. However, in Spain, which was neutral during the First World War, the media widely reported the high incidence of death from the illness. The name of the virus became associated with Spain as a result. …Canada was hit hard by the illness, from cities to the most remote communities. 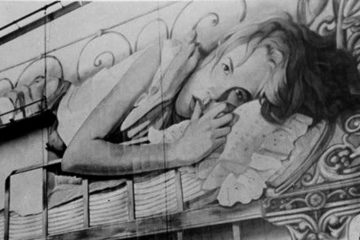 Also receiving very little Canadian media scrutiny is the report of a visit by Queen Elizabeth and Price Phillip to the area and their taking native children on a picnic and later taking a few of their young guests back to the palace. Not newsworthy perhaps.

“Almost all of the “explanations” given by the hysterical media imply that the children were murdered by the White, Catholic supervisors at the residential school. Where is the evidence for this?”

Where is the evidence that Jews were NOT behind this ? There is none.

Greetings Howard. Describing death by disease as murder is their signature tune.

a lot of people worldwide died of infectious diseases in particular TB and anti biotics only became available after WW 2. In Canada that was not different at all.