TAKE OFF the Mouse ears. It’s okay to say goodbye to Mickey. The Walt Disney who interviewed Wehrner Von Braun in the 1950s, compelling America to go to the stars, is dead.

Where once the heavens were the goal of Walt Disney, now his namesake is entirely dedicated to the advancement of anti-whiteness in every aspect of our lives. [‘The Wokest Place on Earth: Disney mounts an internal campaign against “white privilege” and organizes racially segregated “affinity groups.”’, City Journal, May 7, 2021]:

The Walt Disney Corporation famously bills its amusement parks as “the happiest place on Earth,” but inside the company’s headquarters in Burbank, California, a conflict is brewing. In the past year, Disney executives have elevated the ideology of critical race theory into a new corporate dogma, bombarded employees with trainings on “systemic racism,” “white privilege,” “white fragility,” and “white saviors,” and launched racially segregated “affinity groups” at the company’s headquarters.

I have obtained a trove of whistleblower documents related to Disney’s “diversity and inclusion” program, called “Reimagine Tomorrow,” which paints a disturbing picture of the company’s embrace of racial politics. Multiple Disney employees, who requested anonymity out of fear of reprisals, told me that the Reimagine Tomorrow program has become deeply politicized and engulfed parts of the company in racial conflict.

The core of Disney’s racial program is a series of training modules on “antiracism.” In one, called “Allyship for Race Consciousness,” the company tells employees that they must “take ownership of educating [themselves] about structural anti-Black racism” and that they should “not rely on [their] Black colleagues to educate [them],” because it is “emotionally taxing.” The United States, the document claims, has a “long history of systemic racism and transphobia,” and white employees, in particular, must “work through feelings of guilt, shame, and defensiveness to understand what is beneath them and what needs to be healed.” Disney recommends that employees atone by “challeng[ing] colorblind ideologies and rhetoric” such as “All Lives Matter” and “I don’t see color”; they must “listen with empathy [to] Black colleagues” and must “not question or debate Black colleagues’ lived experience.”

In another module, called “What Can I Do About Racism?,” Disney tells employees that they should reject “equality,” with a focus on “equal treatment and access to opportunities,” and instead strive for “equity,” with a focus on “the equality of outcome.” The training also includes a series of lessons on “implicit biases,” “microaggressions,” and “becoming an antiracist.” The company tells employees that they must “reflect” on America’s “racist infrastructure” and “think carefully about whether or not your wealth, income, treatment by the criminal justice system, employment, access to housing, health care, political power, and education might be different if you were of a different race.”

In order to put these ideas into action, Disney sponsored the creation of the “21-Day Racial Equity and Social Justice Challenge” in partnership with the YWCA and included the program in its recommended resources for employees. The challenge begins with information on “systemic racism” and asks participants to accept that they have “all been raised in a society that elevates white culture over others.” Participants then learn about their “white privilege” and are asked to fill out a white privilege “checklist,” with options including: “I am white,” I am heterosexual,” “I am a man,” “I still identify as the gender I was born in,” “I have never been raped,” “I don’t rely on public transportation,” and “I have never been called a terrorist.”

Next, participants learn about “white fragility” and are asked to complete an exercise called “How to Tell If You Have White Fragility.” The program interprets beliefs such as “I am a good person, I can’t be racist” and “I was taught to treat everyone the same” as evidence of the participant’s internalized racism and white fragility. Finally, at the conclusion of the 21-day challenge, participants are told that they must learn how to “pivot” from “white dominant culture” to “something different.” The document claims that “competition,” power hoarding,” “comfort with predominantly white leadership,” “individualism,” “timeliness,” and “comprehensiveness” are “white dominant” values that “perpetuate white supremacy culture” — and must be rejected.

In the same collection of resources, Disney also recommends that employees read a series of how-to guides, including “75 Things White People Can Do for Racial Justice” and “Your Kids Are Not Too Young to Talk About Race.” The first article suggests that white employees should “defund the police,” “participate in reparations,” “decolonize your bookshelf,” “don’t gentrify neighborhoods,” “find and join a local ‘white space,’” and “donate to anti-white supremacy work such as your local Black Lives Matter Chapter.” The second article encourages parents to commit to “raising race-consciousness in children” and argues that “even babies discriminate” against members of other races. A graphic claims that babies show the first signs of racism at three months old, and that white children become “strongly biased in favor whiteness” by age four.

We had a shot at something unprecedented in human history, but allowed Jewish-media-induced guilt to outweigh our desire for tomorrow. Anti-White guilt.

Walt Disney — under Walt’s own brand of Aryan leadership — went from giving Von Braun a platform for promoting the White man’s ascent to the heavens, to — under Jewish ownership — Critical Race Theory (CRT) in the span of 60 years; where once Whiteness and White excellence had a new era of space exploration and colonization within our grasp to now, when the Jews hold sway, when anti-Whiteness negates all hope of a better tomorrow.

Jews Running Out of Brown Shock Troops, Stage Protest Themselves
Austrian Intelligence Says US Organizations are Funding Immigration into Europe
Superman, Volkswagen, and Lazar Kaganovich
This Is America, 2020
Finally, a Zionist Group that Deserves Encouragement
Soon It Will Be Illegal Not to Love Jews
Swedish Children Reported to Police for Distributing Immigration Factsheet at Their School
Jewish Sex Predator Harvey Weinstein Caught Strolling Around Target Store Without His Walker
Tags:anti-whiteanti-White propagandaJewsWalt Disney World

It’s what jews do.

Even White babies are infected with racism! Instead of “original sin” it is now “original racism.”

Guilt and shame are their main weapons. That is also why they are so much into pornography.

…I am actually fine with this. I accept that characterization and challenge in response “why should that bother me?” 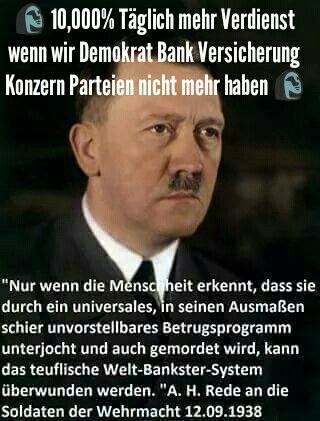 “Only when humanity realizes that it is being subjugated and also murdered by a universal fraud program that is almost unimaginable in its dimensions, can the diabolical world bankster system be eliminated ”
A.H. to the soldiers of the Wehrmacht on September 12, 1938 https://www.gegenfrage.com/banken-militaer-usa/

EMPIRICALLY THE PITH AND THE KEY OF ALL COGNITION on ANY political controversy, therefore, also historical – comes ALWAYS from the following perception:

“Who actually hates and therefore slanders whom?“– https://flashbak.com/when-nazis-attack-mens-action-mags-and-hitlers-perverted-minions-28735/

Bratianu, a clever Romanian minister, who reproached the Romanian people for carrying out a Jewish pogrom. Bratianu said: “Do not commit any violence or pogroms against the Jews, for it would only harm you. Instead, create solidarity among yourselves so as not to buy anything from the Jews, or sell anything to them, or take service with them. Then, even if you wanted to make them stay, they would run away from you.”
https://balderexlibris.com/index.php?post/Lyutostansky-Ippolit-Iosifovich-The-jews-and-ritual-murders-of-christian-babies

The Truth ? Take every instance of the word WHITE in the above article and replace it with JEWISH, and everything becomes clear.

What it boils down to is the constant cultural enticement for Whites to abandon their group interests and commit racial suicide, intentionally broadcast through media difficult to evade or avoid. Symbolically, a Jew stands over a European and constantly commands, “Kill yourself!” It’s like something from a psychological horror movie.

It is vile. And worthy of hatred.
Anger is a catalyzing emotion, a sign you’re still alive and still care.

Disney was great in the 1920s-40s – vitriolic anti-German propaganda aside – and films like Snow White or Pinocchio are still unrivaled in sheer cartoon artistry.
They became a little stale in muh1950s (what didn’t ?) and 60s, barely clung to life after Walt’s passing, the last Disney movies I remember enjoying were The Cat from Outer Space and The Rescuers.
Much went down the toilet during the 1990s and Disney were no exception, ‘gay day’ signaling the beginning of the end even for the theme parks.

If Disney wasn’t Jew controlled, the company would not make so many buyouts like Star Wars and Marvel to keep themselves relevant. The company I believe would stick to their own thing. Heck, I don’t think Disney owned by self-respecting whites would even look at Jewish companies like Marvel.

Another thing to note, Disney has been releasing a lot of 4K Blu-Rays and there’s some films that I notice are missing. The most notable one for me is Snow White. Now why films like this one not get the 4K Blu-Ray treatment? It’s not that hard to figure out.

Maybe we’ll get a Blu-Ray titled Coal Black.
Disney’s troubles started with labor disputes in the 1940s.
Walt was ‘too tyrannical’.
Translation: he wanted to be involved in EVERY aspect of production and make sure they got it right.

Do you mean ‘too tyrannical’ part in a good way or a bad way. Also Coal Black was part of Merrie Melodies cartoon, was Merrie Melodies part of the Disney family because it says it isn’t on Wikipedia?

Proto-communist labor unions were used to undermine White businesses to make them mores susceptible to Jewish buy-outs and takeovers, same happened at Disney.
‘Tyrannical’ refers to Walt insisting on a very high standard in all aspects of design and production. You can present anything and everything in a negative light if you try hard enough.
Merrie Melodies is what Warner Bros. called their version of Disney’s Silly Symphonies, two very similar and competing cartoon series. Merrie Melodies were later renamed Looney Tunes.

NV readers will enjoy listening to William Pierce on track 6 of Volume 9 of the Alliance’s Power of Truth series: “Disney and the Jews.” https://cosmotheistchurch.org/product/the-power-of-truth-volume-9/

For those who prefer listening to this for free rather than purchasing the CD, go here: https://video.natall.com/dr-william-pierce-disney-and-the-jews/ That is on the National Alliance’s new video channel that YouTube and Bitchute can’t shut down. It was on Natall.com/Bitchute where many other Pierce videos still appear, but is one of the videos Bitchute took down, perhaps by accident, and has never restored.

… the artist Banksy built a theme park in England called Dismal Land; it had capsizing refugee boats, riot police, etc., etc., check it out on U-tube, …!

Disney and the jew would not survive 10 minutes if us stupid, dumb, ignorant, imbecile whites would boycott the jew, and stop feeding these demonic jews. STOP FEEDING THE JEW whitey. Booze, movies, tobacco, stores, cosmetics, sports, doctors, lawyers, dentists, “entertainment”, etc all support the jew by us dumb stupid whites. Stop witholding of taxes, stop filing tax forms, wake up white man or die from 10,000,000 jew immigrant cuts. Will Whitey ever “get it” before he disappears forever?

The jews seem to relish in not only taking over once proud white companies, but rubbing our noses in it with the most vile forms of humiliation. They did it with Henry Ford’s company and now Disney. Only the bottom of the cultural sewer will do for these destroyers of Creation.