A WHILE BACK the CEO of Chick-Fil-A publicly and ostentatiously got on his knees and shined a Negro’s shoes.

2020 was the year of taking a knee for Negroes. Police did it, churches did it, synagogues did it, everyone but the self-respecting did it.

Colossal piece of trash Kim Kardashian literally cut her teeth by taking a knee for a Negro. Recently she lost her mind when America executed a Black man, a Black man she says is “nice.” No mention of the White people this now-dead Negro brutally murdered.

Just weeks ago reprehensible Negress Jemele Hill suggested that a White man was “racist” because in a fair boxing match he knocked a Negro out “smooth.” She then said she was kidding — but of course she wasn’t. She’s so used to seeing White people on their knees in front of Negroes that the sight of a Negro on his back with a White man standing triumphant over him shook her to the core. If that’s not “racist,” then what is?

And 2020 was the year that Negro savage George Floyd was canonized. Heck, if you believe what you see on TV, White people in America are so cucked that that former haven for Nordics, Minnesota, gave the Alzheimer’s patient a wider margin in the 2020 presidential election than they gave to Hillary in 2016. Uh-huh.

And finally in the most depraved act of Negro worship of last year, on December 14, 2020, the once-great state of Michigan formally gave its electors to Joe Biden and Kamala Hateswhites in a solemn ceremony. During the event, they played the National Anthem (just to fool us into thinking they are Americans). Then straightaway they played the “Black National Anthem,” whatever that is. All of the electors were asked (told is more like it) to stand for this unholy ritual.

All of them did stand. For a certain class of people, apparently that’s what you do in America in The Current Year.

And I can guarantee you that that was the first time any of them were ever on their feet rather than on their knees when paying homage (let’s call it pretended homage) to the Negro.

It is indeed sickening. Chances are a good
number of them will die after they get the jab.

Most muricans simply need to be eradicated or be turned into mulch.

I find not wanting America to collapse baffling. Everyday this nigger and kike worshipping cesspit is trying to kill me and my entire people permanently.

It really cannot be said enough especially these days,

Someone should do a UK version of this image.The UK is a Commie Torah gulag.

Agreed as the jewK is simply one of the most subverted by jews and their golems in the whole of Europe.

I had to tell a Falun Gong loon colour revolter that Cromwell was Europe’s first Red regicide…almost no one understands that the Torah party are the original Reds, least of all the pea-brains of the Left.

HAhaha, so they traded one deity for another, the paganism never ends. I don’t fret, these are not worthy my time. Their blood is on their head. I am innocent. And we all fall down. If Germany rises above then we will also.

I think you misspelled christianity aka jewish mind poison as christianity is and was always a trojan horse of semitic malware against the European Mind.
https://nationalvanguard.org/2019/08/christianity-is-jewish/

Why people of European descent must reject christianity.
https://nationalvanguard.org/2019/02/why-europeans-must-reject-christianity-part-i/ 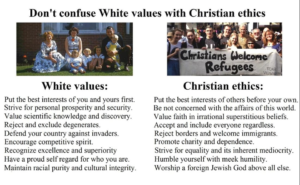 I am sorry to offend you or anyone to believing in something that even you cannot deny that these white values as you call them come from the goodness of one’s love for the man you have renounce. People of Christian ethics are like those of the Pharisees poisoning the minds who know no better. They are like the ones who love everything to the point of loving even what is wrong. Please do not confused with them, as I only come to impart my love for my people as I do for the love of God.

> Intentionally ignore all of the sources that I provided to refute.
> Proceeds to reply with typical christard drivel.

Ignore the xtains mein friend. We destroy their Hebrew magic with our ritual. http://final-rtr-js.epizy.com/

Thank you my racial kinsman.

Only jews are “Racists” – it’s their Talmudic religion. Non-jews are cattle.

Unfortunately, dear Julius, most people have no clue about who was spreading – and still is – the propaganda about the Germans intending to “shoah” all the Jews and oppress what Jews regard as cattle in human disguise.
All Whites who have well-equipped brains and value the now fast disappearing heritage of ours should read Mein Kampf. No point to recommend it to the less equipped, as it took even me a long time to wake up, despite my high IQ. Being born and raised in Poland and then moving to the experiment-country Sweden, was such a solid obstacle to figure out who is behind the Divide and Impera tactics.

So many weak Whites taking a knee and bowing their heads won’t see the blades of their executioners coming down when the non-White hordes finally gain the upper hand in full, and so the race is culled of its most unfit. Justice? In terms of Nature, I believe it is. Only those who will fight to live are deserving of life.

Are you fighting for racial life alongside others with the same purpose or on the sidelines watching others do the heavy lifting? http://www.natall.com

I’m quite sure many Irish, British, Swedish or German people would have been happy to pick cotton in the new world – albeit not as slaves.

No, because malaria was a major problem back then and Blacks had a certain resistance to malaria because of sickle cell that whites did not. Malaria almost killed Jefferson Davis and dropped white people like flies in the old South. So there was a medical/biological aspect to slavery.

You can get used to all kinds of things and there are – and were – treatments for malaria. In fact, there are (were) treatments for many diseases before the Romans slaughtered the Druids and their Cuckstian successors suppressed all knowledge that would have jeopardized (((doctor’s))) business interests.
Can’t have the goyim sheeple know that there’s an herb when the chemical drug is so much more profitable……

“A class of angry, impoverished pioneer farmers began to emerge as the 1600s grew old. After BACON’S REBELLION in 1676, planters began to prefer permanent African slavery to the headright system that had previously enabled them to prosper.”

I cannot help but speculate on the hundreds of white females I see who join BLM. How many of them are dating and copulating with black males? I remember the book “Can the South Survive?” by Andrew Grissom where he documented that there was indeed a degenerate sexual element bordering on pathology on the part of white female freedom riders and white female activists and it is a part of the Civil Right movement they would rather you not know because it tarnishes their lily-white, pure as the driven snow, reputation of being motivated by pure Altruism.

Think of the white male wiggers, effetes, and misogynists, as the needful complementary cuckolds.

I believe the “black anthem” is either “We Shall Overcome” or a song by James Weldon Johnson. When I was in middle school in the late 1970s and early ’80s we had an assembly every year that was all about paying homage to the unworthy. Some teacher or other would always lead the assembled student body in singing both of these songs. Evidently the school officials thought that the whole student body should sing them, even though probably seventy percent of us assembled there were White. Since there was a large black minority at the school, we all knew were really like, whether we ever voiced our awareness or not. These assemblies were occasions of disgust for me, and I never once joined in the singing of these songs of… Read more »

I used to think the Black anthem was Straight outta Compton, but I believe it may have been superceded by something along the lines of uh-huh…..yeah…yo – f$#% that b&^$% muhf&ggah

No. It is “Lift Every Voice and Sing.” This I know because my elementary and jr high was 90% black before I moved to another town and enrolled in a majority white high school.

Yes, that’s the song by James Weldon Johnson. It has nothing whatever to do with White people, yet White students were expected to sing it.

And the greatest offense of all, even doubly so since it happened on Black History Month, was Tom Brady ( a white quarterback) beat the Kansas City Chiefs in the Superbowl who had a mulatto quarterback married to a white blond female. Just to be clear as a matter of principle I do not watch professional sports but Facebook and Twitter were beset with black rage who viewed the victory as the height of white racism! I am reminded of the Marxist principle of the “Society of Spectacle” whereby the system uses entertainment and spectator sports to negate the revolutionary discontent of the Proletariat. It seems to me that fits much better with white middle and working-class people. As for myself I have mentally seceded from this whole anti-white system… Read more »

Totally.The same is true of every acronym state…they have always been kosher vehicles to make us infight and tax us to poverty.

One of the glaring UNWORTHY is the pompadour preacher Jimmy Swaggart, an exposed whore monger hypocrite. The few of you white WORTHY who are still alive and struggling, you may be interested to know that the above Unworthy Scumbag POS “Preacher’ is now having his “February Shareathon” money raising scam from white Christian imbeciles. As of this morning he has raised over 3.6 Million from mostly whites WORLDWIDE, not just in USA. They call in from all over the world asking Jimmy to pray and cure their diseases, broken bank accounts, broken families, etc, etc. etc. If I remember correctly, last month’s “January Shareathon” raised over $4.5 million the last time I had stomach to watch this abomination. In meantime, the WHITE WORTHY like Vanguard are lucky to get $1000… Read more »