THIS IS why you don’t let alien races into your country.

This is why you draw an inviolable circle around your country and anyone who dares cross it pays the final price. Both citizenship and residence must be race-based: no non-Whites, period.

When Castro took over Cuba many Cubans fled to that great “Beacon Of Hope” known as America. Not all were White. Some were obviously non-White. Others were pretending to be White. They all waved the American flag.

Never let aliens into your country.

For now the bill comes due.

For all those years of the Republican Party feasting off the Cubans in Florida now the bill for it comes due (a lot of good those GOP votes did us anyway).

Now something called Alejandro Mayorkas has been appointed by Joe Biden to be his Secretary of the Department Of Homeland Security.

Some security this will be.

And quite frankly the name Alejandro Mayorkas doesn’t sound American. And it’s because it’s not.

So the alien is not a Cuban and is not a Romanian.

The alien is a Jew.

That means in 1959, tucked in with all those flag-waving patriots, came an explosive device in the form of a little baby who was a racial alien Jew.

Now that explosive device is set to go off in all of our faces.

The bill always comes due.

This alien Jew doesn’t believe in America exceptionalism but he knows how to mouth the platitudes. Like Ted Cruz he is pious (fake pious) about America as a “beacon of hope” for the so-called oppressed (meaning scum) of the world.

“The Shining City on a Hill.”

That is, the stupid country.

And so this alien will repeat and intensify and make real all the subversive propaganda of the last half century made to kill off the White race.

Now this racial alien Jew is set to be DHS secretary, charged with defending our borders and our ancestral homeland.

The fox has got its paws on the hen house.

The Jew is manning our ramparts.

What could go wrong?

Recently this racial alien Jew sent out a tweet that should send a chill down the spine of every White man who wants the survival of our race.

It went: “When I was very young, the United States provided my family and me a place of refuge. Now, I have been nominated to be the DHS Secretary and oversee the protection of all Americans and those who flee persecution in search of a better life for themselves and their loved ones.”

First off, protecting America is the last thing he wants to do. He wants to destroy America.

And also the man whose job it will be to keep America safe has explicitly and brazenly said it will be his job to protect foreign invaders.

He wants to subject America and Americans to massive race-mixing so as to dilute and kill off the White race so Jews will become our masters.

And so they purr in our ears like Allen Ginsburg to a runaway Iowa kid: Letting in the alien is as American as mother and apple pie, if not more so.

To think otherwise is to be a “fascist.”

Don’t forget that Jewish poem on the Statue of Liberty, it is now your national charter.

But it always was a lie.

It’s all a bullet aimed at the head of White America. A new morality is needed.

And now, post-Trump, there will be an unstoppable torrent of opinion that we must open the floodgates wide, lay down the wall, erase the border, and in the deluge let in every Black, Brown, Yellow, Hindu, African, Chinaman, Hmong, Guatemalan, El Salvadoran, Mexican, Indonesian, Indian — that is everyone from every Third World hell hole, everyone from everywhere who is not White.

Let them all in.

But not South African Whites, of course.

Post-Trump they will tell us we need to atone for the evil he did and we are obliged to wave them all in.

To do anything else is un-American, they will say.

It will be a veritable land rush.

They will say “asylum” and the good American slaves will say “welcome home.”

They will say “asylum” and the good American slaves will say “amnesty.”

The Jew Alejandro Mayorkas will make sure of that, as he laughs up his sleeve at the stupid goyim.

Oh America, once a great nation.

Which is why you never let aliens into your country.

The bill always comes due, and now it has arrived and must be paid.

Just look over there, or over there — you can see the bullets coming.

What’s next, Joe? Ya’ gonna appoint Dracula to be in charge of safekeeping the nation’s blood supply?

A “country of welcome” isn’t a country at all

Greetings Douglas, one of the Montevideo Convention (1933) stipulations is that to be recognised as a country it must have a border (and government, population, and ability to interact with other states). A borderless country might as well dismiss its politicians and hire an inexpensive sociopath to shout “Come and get it!!!!”

By allowing Jewish banking families control over the issuance of currency and credit as presidents over the past century+ have done, it’s nearly a sure bet Dopey Joe will continue this fine tradition of economic vampirism.

putting up a White only barrier of entry around Europe makes sense, but around the America’s it does not make sense.

Joe Biden isn’t president, it hasn’t even been announced. Australia and other countries have not officially stepped forward and proclaimed him president. To believe that is Anarchy.

No, hahaha, its laughable, but the PM Scott Morrison hasn’t said a word. What legal basis has the media concluded that Biden won?

Thanks for that important piece of the new puzzle, Mr. Mercer. But can this Yid be any worse for the country than was Mikael Chertoff, coauthor of that wonderful Patriot Act? 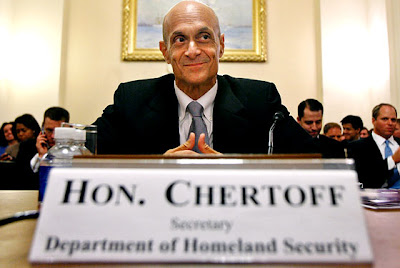 Don’t you just love that little smirk smeared across Chertoff’s face? That smirk that says: “I’ve screwed you royally stupid goyim and made millions doing it. And best of all, there isn’t a damn thing you can or will do about it.”

Yes, Chertoff was a particularly egregious abomination, the fact that he was in charge of “Homeland Security” for a White Nation shows that that nation is self-destructive. The early life tells the tale:

Michael Chertoff was born in New Jersey. His father was Rabbi Gershon Baruch Chertoff, a Talmud scholar and the former leader of the Congregation B’nai Israel in Elizabeth, New Jersey. His mother is Livia Chertoff (née Eisen), an Israeli citizen and the first flight attendant for El Al. His paternal grandparents are Rabbi Paul Chertoff and Esther Barish Chertoff. Chertoff attended the Jewish Educational Center in New Jersey.

Yes, Mikael comes from a line of rabbis, all right. So do lots of Jews.

But there is more: Чёрт is “the devil,” and Chertov (Chertoff), Чёртов in the original Cyrillic, is translated as “the devil’s own,” “the damned.” My wife is Russian and she told me years ago that Chertoff translates in Russian to “son of the devil.” Take your pick. We called him Beelzebubovich around our house. :o}

Does anyone remember how the Judeocommunist Soviet styled and named, umbrella origination called “DHS” was in fact founded by the Jew Michael Chertoff? Cuban Jew? Does anyone remember M. Chertoff hired the well known, outright Soviet, Judeocommunist Markus Wolf as his top administrator? Thankfully, that Jew had the good sense to die shortly after his hiring. Does any one remember Wolf was the former head of the East German STASI, known as THE most draconian surveillance organization in history? So is the “Cuban” development anything new? What has changed?   The country has been Judaized for some time now. Just look at the giant menorah erected in front of the D.C. Jew House with all those Chabad Lubavitchers joyously celebrating Hanukkah around it. If one looks carefully, they will see… Read more »