LET’S START with some harsh facts. The average Black IQ in the U.S. is estimated by various sources as being somewhere in the mid to upper 80’s as compared to the White average arbitrarily set at 100. In Canada, with its large number of immigrants from the Caribbean, the average Black IQ is likely below 80. Intelligence differentials are the primary cause of the inability of the two races to peacefully live together.

Blacks spent tens of thousands of years in hot, steaming jungles in which everything needed for survival was within easy distance. There was no evolutionary benefit to possessing high intelligence, and only a small number of Blacks have higher intelligence than the average White person. Caucasians, by comparison, developed in the cold, inhospitable climes of Europe, and needed higher intelligence in order to plan ahead to survive the cold, harsh winters.

Blacks never developed a written language, only used the wheel in the sense of employing logs to roll their canoes into the water, and never built homes more than one storey high out of anything other than mud and plant material.

Persons of lower intelligence have a lack of inhibition and foresight, and an inclination towards impulsivity which can sometimes lead to spontaneous criminal acts, often committed in front of witnesses, without any thought as to the personal consequences.

There is nothing wrong with Black IQ being lower that that of White people, they are perfectly developed for their natural surroundings. What is wrong is that Blacks were forcibly removed from their natural surroundings to be used as slaves. That was a crime against humanity which we are now paying for in terms of civil unrest, high crime rates, massive societal costs in terms of welfare, policing and incarceration, in addition to a substantial reduction in our quality of life.

One current example of the effects of lower intelligence is that when Blacks say they want “justice”, they are not referring to the law or to the application of the law. It simply means that they want things to be done their way, as in “no justice, no peace”.

An example in Canada some years ago was when a Black driver was issued a ticket in Toronto. Soon after receiving the ticket, he and his companion physically attacked the police officer. A White person in such a situation would have accepted the ticket, reasoning that the ticket could be fought in court at a later date. The Blacks, living largely in the present, erupted in rage.

I remember moving to Canada in 1966, when Toronto was 97% White, and most of the other 3% were native Indians. The few Blacks around were descendents of slaves who escaped from the United States through the Underground Railroad, and they were thoroughly integrated into the workplace. The worst thing that ever happened to them, as well as to us, was when immigration was allowed from the Caribbean, (the average IQ of Jamaicans is 71) (*), and crime and violence became the norm.

We must correct the errors of the past, and soon, or our lives will become a living hell and the future of the White race will be at risk. Let’s try to fix things legally, as the alternative is difficult to contemplate.

(*) – World Population Review (here), scroll down to the country listings at the bottom.

Conservatism Is for Losers 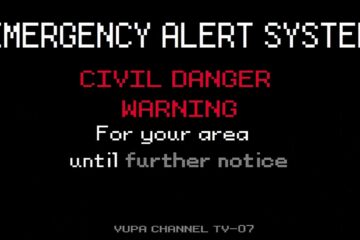 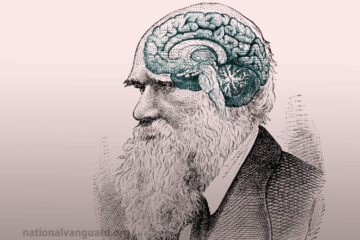 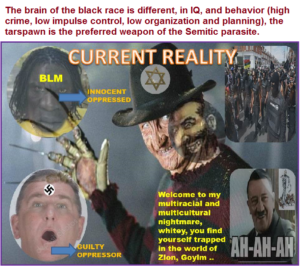 A small but important step in realizing the goal of separation of races is to understand that we can form small communities now. It’s just a matter of finding like minded (like Cosmotheists who generally agree on a basic set of values, ethics, goals and so on) White families or individuals and collaborate to make community happen.

There’s nothing illegal about being a neighbor to your friends and family so far as I know.

The image at the top beautifully illustrates the pure races in terms of their essence. Perhaps the American Indian is flattered a a tad bit by the artist, shown with a touch of the Caucasian. The Aryan man appears very 19th century, driven, a tad bit harsh, realistic, and moral. The Negro looks benevolent in his natural state. The Oriental also appears 19th century, typically obstinate, clannish, slightly shifty, and not terribly moral. I live in an upper middle class mainland Asian (mostly Chinese and Korean) neighborhood. Interestingly, the home next door was purchased by two career driven Korean couples who are at least in their early 30s and neither has any children as yet. Other than a few adapted traits, such as a newfound appreciation of dogs, these Chinese… Read more »

http://www.radiofreesouthafrica.com/graphic-photos-farm-murders-south-africa/ When Bantus in South Africa had their own homelands you let your leaders and media condemn us to the above situation. They were separate tribes with separate leaders and had their own boundaries. It was the British that wanted a South Africa to have mass migration and cheap labour for their mining friends (ie Oppenheimers and Rhodes fronting for Rothschild. The photos reveal the barbarity of black culture. You still have time. Remember Nelson Mandela said shoot to kill just before he became State President. 20 Zulus were killed. Now the current black State President said shoot to kill and 4 were killed by police. You think BLM to blacks. If you think that you must be stupid. Expect crime to clime. Good luck with liberals they are your… Read more »

Over 80% of the now U.S. NEVER had slavery. And because the U.S. was not a cohesive country with a central government until the 14th Amendment in 1868, after which slavery was abolished, the U.S. technically, never had slavery. The story of slavery keeps getting bigger and bigger over time and more ‘white’ over time. The Jews are now saying California had African slavery and should pay reparations. There were no Black people in California before 1941.

Because the jews owned most of the slaves, who were mostly WHITE.
http://www.wethoughttheywerewhite.tumblr.com

Congoids, Australasian Abbos and Injuns should be standing as stuffed relics within airtight glass cases, in museums, rather than walking our streets, eating our food and living-off our taxes.