IMAGINE A RACE so completely worthless that its main contributions to the kosher American clogged toilet are serving as sinecure figureheads, draining shekels from muh programs, committing crimes and then engaging in additional brigandage after the appalling content of their character is actually punished, an event becoming rarer by the day. This is the “African-American.” This is your god. Worship the pathological dark burden, make endless sacrifices to these dangerous genetic aliens. In a few years our cities will be indistinguishable from Zimbabwe, but it’s worth it to prevent being called names and maybe wringing a few more years of relative peace from the remains of a dead nation killed by the Jewish poisonous mushroom. Soon we’ll be hearing “500 shot in one weekend in Chicago” and “City burns during peaceful demonstrations after one arrest was made.” The days of bargaining for time and space are over. The dark nightmare created by appeasement and cowardice is here.

Looters in the Port Richmond neighborhood of Philadelphia ransacked a Walmart during the second night of protesting the shooting of an armed Black man on the city’s west side. Rioters broke pipes in the ceiling, flooding the store.

This is a peaceful protest that will bring about “justice.” We can’t let a deranged knife-wielding nightmare monster die for nothing. Brekk demm fuggin papes, mudda fudda. These creatures are fully human and will start behaving themselves very soon. How about 500 billion? Das rite, oranje cracka. Then they’re bused in to provide monolithic support for communism and the final destruction of Vichy America in hypocritical racial headcounts. You might actually get tired of winning.

Fox29 reporter Steve Keeley tweeted video from inside the pillaged Walmart early Wednesday morning. The footage shows the devastation left behind by looters who stole everything from big-screen televisions to small appliances. Water is seen spraying from pipes in the ceiling.

Keep this is mind when you hear about “food deserts” and the bizarre mystery of why no one wants to open a business in an area that resembles Liberia with worse weather. Gibs me dem smoll ply-an-says, beech. This is a noble petition for redress against an unfair system of White supremacy that routinely murders innocent “blacks” who just want to menace the “five oh” while waving a giant blade.

The content of their character. It’s not like they’re afraid of being arrested. This isn’t Whites doing a permitted demonstration, after all. The only sane solution is a boat back to The Mother.

Earlier, hundreds of people invaded the store and could be seen attempting to load multiple big-screen televisions into or onto vehicles.

Our nation has a bright future. The “Platinum Plan” from the phony tough guy will solve this, unlike the countless previous attempts to correct genetic reality that all failed.

It was actually 93% unarmed.

Wallace continued approaching the retreating officers with the knife extended toward the police. Multiple shots rang out and Wallace fell to the ground. A responding police officer loaded Wallace into a vehicle and drove him to the hospital. He later died from his wounds.

It’s practically the textbook definition of a justified shooting, but on the other hand our country is now a vile kosher zoo, so let’s destroy some pipes.

The Empress’s New Clothes: Leftist Self-Worship and the Cult of Artemisia Gentileschi

The Resistance Needs You! 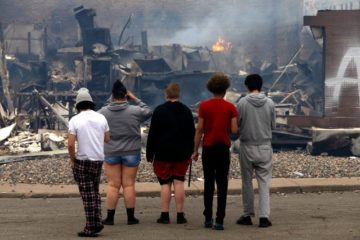 I really wish whites would engage in this sort of behavior on a daily basis destroying these jew Wall st. parasitic monopolies like Wal mart that are sucking the life blood out of main st. and the white middle and working class especially this one would be an absolute blessing This place is an absolute cancer on the rare occasion I find myself in one I am reminded of the disgusting 3rd world zoo this country has become I mean even more so than stepping outside or patronizing another place of business there are NO whites in these places even in the ones located in the less diverse areas the only whites you see (if any now ) are obese degenerate coal burners covered in tattoos with their brood of… Read more »

Home, sweet home! Haven’t been there for a couple of months, but that is about a mile from me, right where a big train accident happened a few years ago that killed like 80 people. My uncle used to live basically around the corner. It’s a block from King’s Highway (Route 13, Frankford Ave in these parts). Was going to go there this week. Guess not now! Walmart shouldn’t mind though, since they are such big supporters (and on a side note, they have people working there who don’t speak a lick of English). During the first round of “mostly peaceful protests” I watched it get looted live on TV. They didn’t do much damage then, but there seems to be more intent to destroy this time, as a number… Read more »

Hello fellow Philly boy, I’m originally from East Germantown-grew up a couple of blocks from where the Revolutionary Battle of Germantown was fought but I never knew it until much later. As far as I know Germantown is nearly all black with only some Asian restaurants and nail shops plus in the older nicer area some race-mixers/SJW types but overall a very dangerous place-a negro went berserk there just a few weeks ago and killed a white girl driving by in her car after shooting some other people in a church before the cops finally mowed him down in the middle of the Avenue. Anyway, i’m sorry to hear the Frankford/Port RIchmond area has gotten so bad. I had a girlfriend from the upstate coal country a few years ago… Read more »

Here’s an article on the berserk negro:
https://6abc.com/germantown-carjacking-skylar-owen-philadelphia-stan-cochran/6859270/

We used to get Kielbasa in Port Richmond, my father said it was the best in the city. That pigeon reference actually comes from one such excursion– they were positively gleaming, you could see the shiny green in their coats. Some of my earliest memories are from Wissinoming where I lived for a couple of years, the only place outside of Frankford where I spent my childhood (probably the few almost-happy years of it). Three of my grandparents and my aunt are buried in the cemetery across from Wissinoming Park (where I learned to ride a bike). It’s all gone now, every neighborhood you mention. Most everything is overrun with spics (which I guess is almost good news for me regarding my immediate safety in the middle of this neo-bolshevik… Read more »

Saint Walter Wallace is allegedly the “father of nine”, another one on the way. He has a very long criminal record. It seems that his entire life was all about knocking up females and committing violent crimes. Of course, none of the facts are covered by the Ziomedia. The looting must go on.

I remembered this from last year in Port Richmond.

The gist: a 66-year-old Stanley Wyjadka (can there be a more Polish name?) has, for the past 30 years, put on a Halloween display for the kids. This year he had an Egyptian theme, built a tomb, and was dressed up as a mummy, who would “come alive” when the kids entered.

A group of 12-15 “youths” went in and one dumped the candy on the ground. He “woke up” as they made for his door and told them to get out, so one 11-year-old said “I’m going to kill you” and proceeded to beat him with a table leg he had been carrying.

I’ll leave you to guess the race.