IT NOW seems that the Chinese government was partly correct to blame the novel coronavirus on the United States’ military-industrial complex. The earliest work on an artificially altered coronavirus took place in US academic and research institutions, such as Harvard, Emory, and Chapel Hill. That research was off-shored to China when officials in the NIH began asking questions about possible breaches of the Biological Weapons Convention.

The NIH was not initially insistent that the coronavirus research by US institutions be curtailed. Their first opposition to it appears to be a “cover yourself” kind of objection, made for show, but failing to threaten consequences for failure to comply with a pause order. The NIH letter to those institutions said that a pause, while desired, would be voluntary on their part. Later, though, the heat would ramp up, and that’s when the research was outsourced to China.

Of course, the Chinese government was happy to take the contract for the continuing development of a genetically modified coronavirus. The US government subsidized the research that took place at the Wuhan laboratory, though the Chinese did the work and reaped at least as much potential military benefit as their US sponsor did.

The primary motivation for a pandemic grade of coronavirus was probably economic, rather than military. The incentive was enabling the present elites in both China and the United States to milk their respective populations of money (via medical fees relating to a vaccine), and to justify governmental actions that facilitated increased control of the populations by the elites.

The release of a novel coronavirus to the world was, I think, an accident. The nCov19 virus isn’t much use as a biological weapon. Apparently, the Chinese had chosen to raise the virus’ infectiousness first, leaving the fine-tuning of its host targeting and the severity of its pathology for later. The released virus was thus in some intermediate form and was incomplete and inadequate as a bioweapon.

Unraveling the Mystery of "Anti-Semitism"
Capitalism Is The Real Disease, Bailing It Out Only Makes Us Sicker
Virus Scam Extraordinaire: The ADL Wants its $60 Billion Cut
Philosophy, Religion, and the Laws of Nature
Smollett Sentencing: Why the Delay?
Becoming Culturally Enriched by Immigration of Super-Intelligent Chinese
Jews Receive $264 Million in "Covid Money," Claim They Need $650 Million More
Why the Attacks on The Turner Diaries?
Tags:ChinaCoronavirusCOVID-19David SimsMilitary Industrial-Complex

This is what they are doing with the covid-19 and must be stopped: https://www.youtube.com/watch?v=s4AqpTN90lI https://www.youtube.com/watch?v=deZ83WxKJk0 And actually not just communism, just go back with Milton Friedman(from the Jhon D. Rockefeller University of Chicago) and even David Ricardo and they took Adam Smith(seems he also was a jew) liberal capitalism, they were both jews: https://www.youtube.com/watch?v=RWsx1X8PV_A I am sure that there may be some points in which socialism has some trues and capitalism also also is rights. I just think that both systems were created with mix bag of trues and lies on purpose, one more than the othe perhaps but in the end with same puepose, to descieve people so and leave open doors the long run agenda of these people (including the Britain Crown and the masonic groups). What should… Read more » 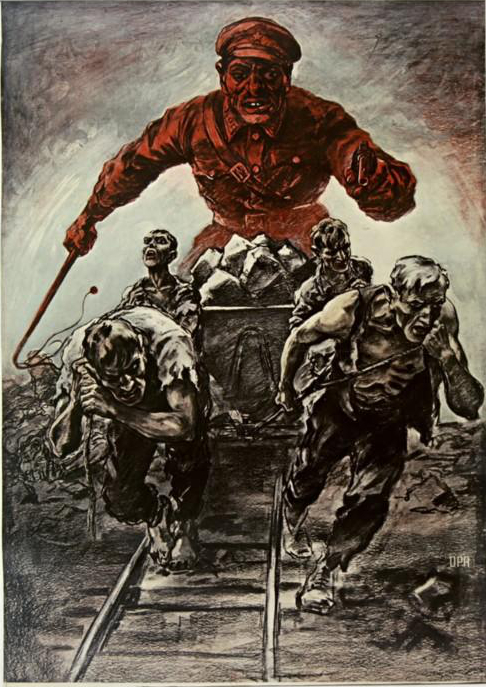 Even a blind can see that the more left a nation is, the deeper its social inequality, the greater the contingent of homeless and unemployed beggars, the larger its prison population, and the more precarious or non-existent public services will be.

If the world is poorer and more decadent, it is because communism and its inventors are in charge.
https://fliegende-wahrheit.com/2020/08/27/der-juedische-messias-kommt-dieses-jahr-ab-freitag-den-18-09-2020/#comment-4281

Not denying communism is worse but there some points in captitalism that dont make it a real alternative as in its own way it also creates elites that dont believe in nationality but in money and oppreses other little by little since the market must flow, you must compoetitive, the prices have to go down someway to make better offer to the public and either we import or just reduce the salary of employees to be competitive with other nations, there are too many people in the industry and in order to get more money we must dispalce people and assigned more work into less people, etc. You want to be competitive with chinese?, fine, then under the capitalism rules work as many hours as them and less reduce your… Read more »

Real communism – as different as the theory or propaganda designed to deceive the unwary – is the most brutal and exploitative form of capitalism.
https://nationalvanguard.org/2016/04/literally-a-threat/#comment-36351

Truth is the tree of life and freedom is one of its fruits – The truth does not defame it is defamed.
https://www.brighteon.com/channels/punxsutawney

Hitler overcame the magnanimity of great administrators like Caesar, the Roman Emperor, and Pharaoh Aquenaton, who are quoted here on page 23. https://archive.org/stream/ArchitectsOfDeceptionByJuriLina_201903/Architects_of_Deception_by_Juri_Lina_djvu.txt
Empirically, meritocracy comes from eugenics, as does democracy’s Kakistocracy

‘Corona denial’ is as anti-Semitic as ‘Holocaust denial’.

Quote: “I will not have my children vaccinated.” No definitely not. But you will have your children tested.

Esprit: The Corona-Test is already the vaccination. Your children have been sterilized by gene scissors, and your family will die out.

The scenes where politicians are publicly vaccinated are psychological operations to distract you from the fact that the Corona-Test is already the vaccination.

Messaage in Spanish & English. Translater Spanish: A. Mendoza It is time to fight back I call for a worldwide boycott of all Jewish businesses. The Jew is behind the plandemic. He wants to force mankind into an NWO dictatorship and murder them. He follows the instructions of the Torah and the Talmud. The Jew has declared total war on all humanity. Jewish supermarkets, pharmaceutical companies, hospitals, mask manufacturers and test manufakturers benefit from the plandemic, while German – and other – companies are being destroyed by the lockdown. All Goyim peoples are now systematically tortured, poisoned and murdered through Jew-produced corona tests and corona vaccinations, whereas the Jews are vaccinated with placebos. All vaccine manufacturers are in Jewish hands. The Jews stir up fear and panic with the help… Read more »

Germany: Damage report of a fairy tale pandemic after only one year

I confess that radicalization is the only good thing we can observe.

Resist, refuse, and REJECT!!!
Have you given any thought to
the strange events of the last
15 months?

((They)) want to vaccinate
everyone – everywhere ASAP,
and all of the developments
of the last 15 months have
been aimed at achieving
that singular objective!