BRAM Stoker’s 1897 novel Dracula is extremely well-known and was the catalyst for the popularization and mass marketing of the myths and legends associated with vampirism. (1) It is commonly believed that Stoker took his inspiration for his Count Dracula from Romania and more particularly from the infamous fifteenth-century Prince of Wallachia, Vlad Dracula (better known to my readers as Vlad the Impaler).

The reason for this assertion, commonly found in the popular literature on Dracula, is that we know Stoker was aware of Vlad the Impaler and had made copious notes on Romania and its history, which helped him to write an absolute blockbuster of a Gothic horror novel. What this conventional narrative leaves out is that Stroker made far more notes based on his research on the occult and vampirism than on Vlad the Impaler and Romania. (2)

Also worth noting is that Stoker also wrote another vampire story, published slightly later than Dracula, called The Wampyre Count, set in Austrian Styria. (3) Clearly for Stoker then, the vampire isn’t just linked to Romania.

The problem with the popular perception is that Count Dracula is not, as it happens, actually based on Vlad Dracula at all. (4)

The villain of Trilby, Svengali, is an Ashkenazi jew who seduces, dominates, and exploits young, nubile European girls; exactly like Count Dracula. Dracula, just like Svengali, is cast as a ‘sinister foreign seducer’. (8)

This also jibes with the oft-suppressed fact that Stoker held overt racialist opinions and regarded the world as being divided between the (European) master race and the “subject races.” (9) He also invoked racial-nationalist rhetoric in his work, (10) while having what can only be described as strong anti-Jewish beliefs. (11)

Indeed, as Rebecca Stott has observed, (12) Stoker is a good example of the late Victorian intellectual advocate for the need to ‘patrol,’ and tear out root and branch any racial or sexual degeneracy to ensure the health of the national body.

Therefore is it any wonder that Stoker would have taken a sinister alien Jew, Svengali, as his model for the ultimate sinister creature of the night?

Spengler: An Introduction to His Life and Ideas
Furrow-Maker
Special Treatment
Thomas Wolfe and the End of the Old America
The Death of Pan
The Quality of Hitler's Writing
Voltaire and the One-Liner
The Defender: “Pluralist” Answer to The Turner Diaries
Tags:Bram StokerDraculaLiteratureVampires

Realism That Leads to Action 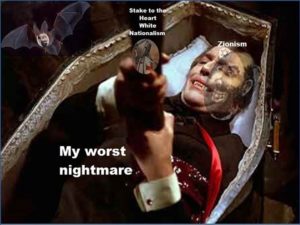 I think Lee was a possible Jude,also…it’s not a proof because he made the mano cornuto but he was a member of some likely Masonic knightly order and as an adoptee Anglo he was a default Zionist as most Anglo’s are when not Communists.

When considering Kosher slaughter, the object of which is, I believe, to remove the blood from the animal. Only the meat is to be eaten. What kind of terrible creature would drink the forbidden blood. Given the deep rooted meme of “being Kosher” for Jews, it seems a fanciful story teller, from eons ago, spun the yarn of a blood drinking monster to dissuade his children and impress upon them the virtues of “being Kosher”. Its a Jewish parable related to Kosher.

Why do I think this? It came to me in a dream.

PS. I was shaken to see the question on the origin of vampires.

Assuming the portraits we have of the actual Vlad Tepes are anywhere near accurate, dudemeister don’t look very European to me…..

And isn’t it telling that, according to the myth, a vampire couldn’t cross the threshold of your home’s doorway unless you invited it inside? Had we never opened our doors hundreds of times to the bloodsuckers we’d surely be hundreds of times better off now!

The vampire’s aversion to crucifixes notwithstanding, there are quite a few salient “coincidences” that point to Dracula being Shlomo. Good article!

Has Dracula ever been portrayed on screen by a Jewish actor ? List of those who have played the Count – http://www.imdb.com/list/ls064974170/