Gunfire erupted on the streets of Kenosha, Wisconsin on the third day of race riots led by anarchists and the left-wing NGO Black Lives Matter.

KENOSHA, which is 67% White and working class, has been abandoned by Wisconsin Governor Tony Evers, who has released public statements providing moral support to the rioters and rejected federal law enforcement resources.

Multiple White-owned family businesses have been burned to the ground. The police have been tepid in their attempts to keep the peace due to political pressure from above.

A video published to Twitter early Wednesday shows a young White man with an AR-15 on the ground being jumped by a mob. The man fired his rifle at the attackers, wounding at least two.

A still image from the incident shows that at least one of the anarchist aggressors pulled out a handgun during the melee.

It is not known who the young man being attacked is or what group he belonged to. In the wake of police and state negligence, armed local citizens in Kenosha banded together to defend one another and their small businesses. They were filmed on rooftops earlier in the night.

The mainstream media has largely covered up the anti-White violence in Kenosha, but after it emerged that a White man may have used force in self-defense, Jewish New York Times journalist Seth Abramson excitedly speculated that the shooter may have been a “white supremacist terrorist” in a now deleted tweet.

While the judicial and media ecosystem has become hyper-politicized and a fair trial is a rare gem, the shooter has multiple advantages in this instance.

The first one is that left-wing propagandists were largely absent from the scene. So far, conservative outlets like the Daily Wire and the Daily Caller appear to be the only ones who were on the ground, thus increasingly the likelihood of more objective coverage.

The next advantage is Kenosha’s White working class demographic, which went for Donald Trump in 2016. Judging from the evidence available, a jury made up of peers is unlikely to reach a guilty verdict against the shooter under the current circumstances.

While explicitly pro-White media are still small, the fate of this young man depends on conservatives in the media makiing, or breaking, solidarity with citizens fending for themselves after being abandoned by their government and police force.

What will they choose? 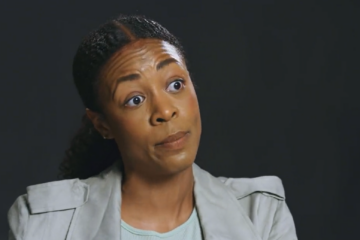 Yet another Jew that openly sides against Whites. Why, it’s almost a trend! One almost begins to believe that they’ve self-appointed themselves to be our enemies on a collective basis as so many of them speak out so.

But who knows, perhaps a few exceptions to the rule do exist….

What I cannot comprehend is the supreme arrogance of these “Jews” who are just as “white” from a non-whites point of view as any white nationalist and think they’re great great great great grandchildren will rule as a master race over these brown hordes. Were exactly do they think they will derive a living standard even remotely the same as today off the backs of these people who they assume will be easily controlled. It seems like it’s all based in an arrogant assumption from the Talmud – written by a Rabbi. As a Christian I have to make the distinction between the Prophets of the Torah and the Rabbi’s of the Talmud. Please correct me if I’m wrong but the best example we have of what these Jews are… Read more »

This young man’s Go-Fund-Me page has already been taken down.

As far as I am concerned, he is a teenage Daniel Boone taking on the savages mano-a-mano!

Does anyone know where I can now contribute to his defense?

Give Send Go Dot Com
Only 66K, as of this moment.

The two dead and the one injured are all jews apparently. It was obviously self-defense.
http://www.fpp.co.uk/online/index.html

The two dead are probably partially jewish; one a sex offender and the other a domestic abuser. The guy who got his arm blown off is most likely just another lost, brainwashed white.

Nope, he’s the most jew of them all,German jew like the baby raper, Rosenbaum. And, now he’s spouting off to the media that he wishes he’d “Emptied his entire clip” into young Kyle.

And I have a quite strong suspicion Kyle is one, as well, which does make one think.

“Americanized spelling of German Rittinghaus, a habitational name from a farm near Altena, Westphalia.”

After a bit of research I doubt it, but he did select “Hispanic” as his ethnicity on a traffic ticket. There are any, many, many German jews with German names, however. Whoever he is, he is one hell of a fighter!

A White NY Times reporter shows nearly equal courage to what the young man named Kyle Rittenhouse showed, by reporting the facts of what went down in Kenosha. I’d love to have seen Abramson’s tantrum after he read his fellow employee’s tweets! Read this thread (it is long) if you are following this: https://twitter.com/trbrtc/status/1298839097923063809 , followed by GlenGary’s https://twitter.com/_GlenGarry/status/1298997314455928832. It is necessary to say that at least some of those injured and deceased in the incident were White. More losses to cultural Marxism

‘While fleeing from the scene, Rittenhouse is again chased by several people. He trips and falls to the ground and fires four shots as three people rush him. One person appears to be hit in the chest, while another, who is carrying a handgun, is hit in the arm’

…That is clearly a dishonest portrayal of what the video footage shows. He didn’t simply ‘trip’, he was assaulted to make him fall to the ground where he is attacked and jumped on by a crowd of cowards. If you read that description above without seeing the footage, you’d think Rittenhouse was out of control.

Look into the “Richard Jewell” story, how he was convicted by the mainstream media.

A fundraiser for young Kyle:
https://www.givesendgo.com/GUCZ?fbclid=IwAR381CrDhT_GH-2IsqLZhi2U8hQ5XY-wFKE3QHSfc-mHmasjNJaulhFiR2k

I just contributed at . . . fightback.law

This is a website set up by his volunteer attorneys.

To get off this hot topic of Kenosha for a moment, let’s take a look at the bigger picture and at the source for this story: National Justice. It isn’t difficult to write about depredations on the White race from a pro-White perspective, especially truthful reports of the Kenosha-like lawlessness that is taking place across the country today and the role of anti-White communists, their fellow travelers in the Democrat Party, controlled media, queers, Jews and other anti-Whites in coalition against the White “majority” and traditional White values. But beware of those who claim to be leaders and spokesmen for our race. This National Justice Party outfit (NJP) seems to be getting a lot of attention lately, primarily through extensive social media, something I do not use or follow. What… Read more »

http://RonPauIinstitute.org/archives/peace-and-prosperity/2020/august/26/watch-out-hoodlums-victims-may-start-fighting-back-much-more/ … More and more, potential future victims are preparing for confrontation by the hoodlums. Some of these hoodlums, and the people with them, like to complain about police brutality. They may soon be on the receiving end of brutality, but not from cops. When victims fight back, they will sometimes do so disproportionately, and they will sometimes react against people who see themselves as nonviolent protesters or onlookers but are near the hoodlums and appear to be associates of the hoodlums. The danger of being a hoodlum or hanging around with hoodlums will rise. Hoodlums should expect their violent and property destructive ways to place them in increasing danger. Giving up on those activities can help them protect themselves from danger. Meanwhile, protesters and other individuals who find themselves… Read more »

The aftermath of street confrontations are time-consuming and costly, destructive to families of individuals involved, with court cases that take years and cost millions of dollars. Looking at the video at https://www.washingtonpost.com/nation/2020/08/27/kyle-rittenhouse-kenosha-shooting-protests/ , the circumstances around the first shooting involving Kyle Rittenhouse are unclear – and he was assisting pro-LE people protecting businesses, not hoodlums. If it was self-defense, then that likely justifies self-defense in the later shootings. But if he shot someone who was running after him but was unarmed, in the first shooting, then the self-defense argument in the later shooting injuries and death may fall apart, if the state proves that those shot were trying to apprehend or disarm Kyle as if they were LE. Is shooting a larger, unarmed man chasing you self-defense? Which raises more… Read more »