JEFFREY Epstein’s friend and former defense attorney Alan Dershowitz on Wednesday smeared one of Epstein’s victims, Maria Farmer, as “anti-Semitic” — just as she’s in the middle of undergoing treatment for brain cancer and struggling to survive, let alone defend herself.

As the New York Times reported last year, Maria Farmer and her younger sister Annie were the first people to report Epstein to the FBI and NYPD — all the way back in 1996.

Dershowitz, on Wednesday evening, posted an article he wrote for Newsmax titled, “Key Witness in Epstein Case Made Anti-Semitic Claims,” where he took comments of hers condemning Ghislaine Maxwell’s alleged supremacist views completely out of context and accused her of sharing “anti-Semitic canards” that “sound like they came from The Protocols of the Elders of Zion.”

In one particularly hilarious example, Dershowitz said Farmer was “anti-Semitic” for saying Epstein and Maxwell were connected to the Rothschilds — even though Dershowitz himself told Laura Ingraham on Fox News late last year that he was introduced to Epstein through Lynn Forester de Rothschild!

“Farmer claimed to have evidence that the Israeli Mossad hired Jeffrey Epstein to video tape prominent American political leaders committing acts of pedophilia so that Israel could blackmail them into doing their bidding,” Dershowitz said, “and that the entire conspiracy was under the protection and direction of ‘The Rothschilds.’” Well, so? A growing number, likely millions of people, have come to that very conclusion.

Dershowitz also cobbled together this “quote” of hers where he concatenated multiple statements of hers into one, and added his own words too:

“They are ‘Jewish supremacists'” and they are “all connected” through a mysterious organization called MEGA, which is run by Leslie Wexner who is “the head of the snake.”

(For some reason or other, Jews sure hate to be compared to slithering snakes, with their leaders called head or heads of the snake. Maybe, somewhere deep down, they see themselves that way.)

As a reminder, the former Prime Minister of Israel and head of Israeli Military Intelligence, Ehud Barak, was photographed hiding his face while entering Jeffrey Epstein’s New York City townhouse (which was given to him for free by pro-Israel billionaire Les Wexner) in 2016.

Barak also reportedly regularly visited Epstein’s other apartment building in New York (which was majority owned by Epstein’s mysterious brother Mark who bought the apartments off Les Wexner) where underage girls say they were trafficked.

Nonetheless, according to Epstein-defender Alan Dershowitz, it’s “paranoid drivel” (and apparently now “anti-Semitic”!) to suggest Epstein is connected to the Mossad.

Here’s the opener to Dershowitz’s piece:

The central witness in the Jeffrey Epstein investigation — the person relied on by Netflix in its documentary series “Filthy Rich” — is a 50-year-old woman named Maria Farmer.

It now turns out that she may have been motivated by the anti-Semitic attitudes she has long harbored, to falsely accuse prominent Jews of sexual misconduct. This is some of the bigotry Maria Farmer spewed during a recorded two-hour interview that can be heard online, such as:

“I had a hard time with all Jewish people.”

“They think Jewish DNA is better than the rest of us.”

“These people truly believe they are chosen, every one of them.”

“All the Jewish people I met are pedophiles that run the world economy.”

“They are ‘Jewish supremacists'” and they are “all connected” through a mysterious organization called MEGA, which is run by Leslie Wexner who is “the head of the snake.”

Farmer claimed to have evidence that the Israeli Mossad hired Jeffrey Epstein to video tape prominent American political leaders committing acts of pedophilia so that Israel could blackmail them into doing their bidding, and that the entire conspiracy was under the protection and direction of “The Rothschild’s.”

These anti-Semitic canards sound like they could have come directly from “The Protocols of the Elders of Zion” and other classic anti-Semitic forgeries and screeds, but all of this and more come from the bigoted brain and malicious mouth of Maria Farmer.

Those quotes were completely taken out of context. Having heard the full interview, I remember Farmer was actually saying how she witnessed Maxwell’s supremacist views and it skewed her perception of the world but she specifically said she does not hold any ill will towards all Jewish people despite her terrible experience.

Dershowitz himself has admitted to getting a massage at Epstein’s sex parties but claimed it was from an “old, old Russian woman” and “I kept my underwear on.” Sure, seems totally logical that such services would be offered at Jeffrey Epstein’s pervert palace, Dershy.

Farmer responded to Dershowitz’s smear on Twitter writing, “For anyone abusing a cancer patient, I hope you never know my agony.”

“Please defend me against evil elites by contacting them on here,” Farmer said. “I am losing my will to live. I came forward so everyone would know the TRUTH, not the lies spoken by Dersh. Write to him. I need you all.”

Asked about Dershowitz’s attacks on Farmer, National Vanguard’s Rosemary W. Pennington said, “I would expect nothing less from a creature like Dershowitz. Disgusting. Unforgivable. And very suspicious. And it raises an important question: Why is Alan Dershowitz, Jeffrey Epstein’s lawyer, now also one of Donald Trump’s lawyers, standing by his side in the Oval Office?”

It appears he’s taking his own advice by smearing Farmer in his own vile way. But that’s not all bad. Now her heartfelt words, her story, the reasons for her pain, and her insights into “elite” Jews are now reaching many millions who otherwise never would have heard them. 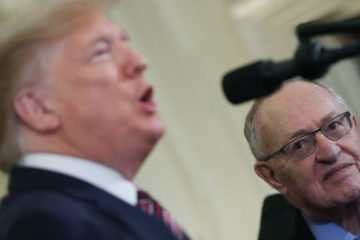 Trumpery to the Sixth Power 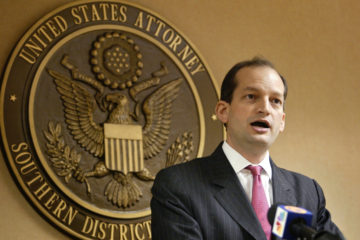 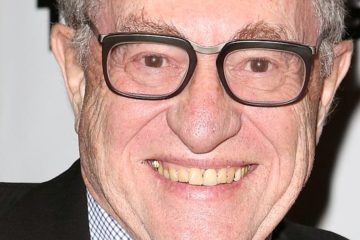 These people are monstrous.

Vile?!! Surely you jest?!. You praise him with faint damnation.

What is suspicious is where Maria Farmer got that cancer from.

In germany there are thousends of Epsteins and Weinsteins…and the police aresting the victims if they speak about these criminals.

Really, I’m not surprised. The best a parent can do for their child is to educate them about Jewish behaviour and tell them to keep well away from them. Dershowitz, my god his face shows utter contempt. What a piece of work, but I see that look in many jews, it’s all too common.

It seems a logical way to blackmail or initiate as it were traitors into their agenda. The jews definitely have a history of child abuse, torture and murder. When I look at the abundance of politicians today that sell out their people and Nation to the Jews, I’d hardly think these means would be necessary. Perhaps the plans ahead are that dirty and rotten (like todays vile vaccines) that being in the club for them requires some vile act by which they would hang if they broke their silence. I think to be in some black gangs requires a member to kill someone. Anyway it’s absolutely hideous and that poor woman is at the mercy of the corrupt and dirty medical system. A system of which has a symbol of… Read more »

In the UK, Jews are causing a raucous about a BLM-supporting rapper who inadvertently went off-script and started ranting about Jewish elitism. Until now I’d never heard of him, but he’s called Wiley and is known as the creator of ‘Grime’ music. On a daily basis they’re outraged that someone has not yet deleted his profile, such as Facebook. His management has sacked him and his record label has dumped him too.

Yet, there is absolutely ZERO conversation about the inconvenient and growing exposure of jewish elites abusing children.

Instead they’re generating faux anger that a white BBC reporter actually spoke the ‘N’-word in her report about a black person being allegedly racially abused. The report itself was typically stirring the proverbial, as they do on a daily/hourly basis.