GENETIC ALIEN inferior lives matter. We need to abolish the police. White man bad. Get on your knees, slave. The last sixty years of appeasement might as well have never happened. It certainly didn’t buy us any goodwill from the tar monsters or their Semitic wire-pullers. Despite the decades of groveling cowardice, we’re now facing demands so ridiculous and disingenuous we never thought we’d see them here in the land of the zoo and home of the Jew. Our mongrel nation is finished, all that remains to be determined is what will replace it. Meanwhile, the city where the latest pathological eruption of Afromania began is in burning ruins and the Jewish mayor would really like your shekels to repair all the damage its planned demolition caused. Looks like we still need you after all, goyim. Have your credit card ready.

Mayor Jacob Frey (D) is seeking federal aid to help Minneapolis recover from the protests and riots that have wrecked the area.

This Jewish conman was last seen sobbing like a woman next to the golden coffin (I bet that’s really going to impress the demons in hell) of a criminal alien who died of a drug overdose while in police custody. All the “precious six million turned into living room sets” cynical wailing sure was good practice for this grotesque display of emotional incontinence. Now the same poisonous mushroom wants to extort geld from the constantly shrinking number of productive Americans to pay for a bongo party it played no small part in encouraging.

“With at least $55 million in estimated damage and far more to come, Minneapolis will need state and federal aid as it attempts to rebuild hundreds of structures after the riots following George Floyd’s death,” Frey explained on Thursday, according to the Star Tribune.

If we had any sense we’d wall off this disgusting experiment in Jewish manipulation, Negro idiocy and White cowardice and let nature take its course. If we had any sanity the Negro failure would be on a boat back to Wakanda and the merchants would be in cattle cars.

In an interview, Frey said he expected the total cost of the damage to be in the “tens, if not hundreds of millions” of dollars across the Twin Cities.

Yeah. No kidding, genius. All the Somali invaders will feel right at home. Maybe “let the schwoogie destroy so we can punish Whites” wasn’t the wisest course of action.

“We will do everything we can as we shift to recovery mode. We’re recovering from crises sandwiched on top of each other, from COVID-19 to the police killing and then the looting which took place afterward,” he noted.

One kosher shuck after another, we’re really getting the business down here. Wait, “looting?” I thought it was “mostly peaceful protests” by well-behaved living fossils concerned with “justice.”

However, Frey hit back at President Trump on May 29 after he criticized his handling of the violent protests and riots, according to Breitbart News.

I’m really sick of you criticizing my wise decision to let everything burn from your underground bunker.

“Donald Trump knows nothing about the strength of Minneapolis. We are strong as hell. Is this a difficult time period? Yes, but you better be damned sure that we’re going to get through this,” he commented.

Come to Moneyapolis for those generous welfare payments! We’re about as strong as baby aspirin, but here’s some profanity in a truly pathetic attempt to display some sort of resolve after my kosher con game created a desert. I’m a real strong monkey, watch out. G*d damn the self-inflicted disaster. Level sand in all directions.

The next day, Frey urged residents to stay home as the riots spread throughout the area.

Prior to Floyd’s death, officials were discussing how to cut $165 million from the city’s budget as they tried to account for the drop in revenue and the increased costs of responding to the recent health crisis, the Tribune noted.

We’re going to have to disband the “five oh,” but it’s because we can’t afford them instead of some wet-brain political stunt.

“This will be a budget crunch,” Frey commented. “To say otherwise would be dishonest, but we are committed to the city. We have a committed team, and I know between our city enterprise and the strength of our communities, we’re going to get through this.”

The amazing origin story of the next Detroit.

Nietzsche on the Jews

The People's Commissar of Health Equality 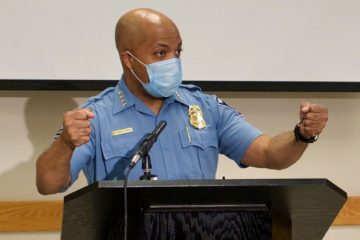 “Decisive Years” (Oswald Spengler) “It is time for the“ white ”world and Germany to remember these events in the first place. For behind the world wars and the proletarian world revolution, still unfinished, the greatest of all dangers emerges: the danger of color, and all that “race” is still in the white towns must be necessary to face it. ” “Where yesterday there was a Christian school there will be a mosque tomorrow. The warrior and virile spirit of this religion is more understandable to the black than the doctrine of piety and compassion, which only strips it of all respect for the white; and, above all, the Christian priest is suspicious of him, because he precedes a white stately people against whom Islamic propaganda, more political than dogmatic, stands… Read more »

The genuflecting of Whites to negroids in recent pre-riots has been sickening to watch. Assuming George Floyd was the excuse, the only one with any moral right to genuflect is Mr. Chauvin, to Mr. Floyd’s wife or mother, as an apology. For everyone else, it is an undemocratic, subversive form of defeatism created by White-hating losers, and perhaps required one day whenever a White and negroid meet formally, in order to maintain social credits. As for defunding the police, more likely is its castration. Too many non-white civilian jobs, from ebonics-rich 911 operators and dispatchers to paperwork-loving bean-counters are at stake to eliminate the bureaucracy. Police who once would interdict crime aggressively, lowering crime rates to historic lows, will now begin to show up to crime scenes 30 minutes after… Read more »