THE US government has formally designated the Russian Imperial Movement (RIM) — a small Christian monarchist outfit based in St. Petersburg — as a terrorist organization, and has imposed sanctions on the group and its leaders. This characterization is groundless and hypocritical. Remarks in a statement by Secretary of State Michael Pompeo to support his labeling of RIM as a “white supremacist terrorist group” also raise troubling questions.

Pompeo justifies the designation by claiming that the Russian group’s activities “threaten the national security and foreign policy of the United States.” He provides no evidence whatsoever to support this far-fetched assertion.

Pompeo misrepresents the group’s principles and activities. For years RIM has been candid about its goals and work — in its publications, in interviews, and on its website. It’s only by the most twisted logic that the group can be called “neo-Nazi” or “white supremacist.” It certainly does not regard itself as either. (Those labels are anyway used less often to describe than to smear.) “We stand for traditional values, Christianity, and monarchy. We not have a single document on our site, not a single word, about white supremacy,” RIM spokesman Stanislav Vorobyev said recently. “Everything we do is strictly within the law,” he added.

As another RIM spokesman explained in an interview, the group’s central outlook is Christian, monarchist, and nationalist. RIM, he said, organizes conferences, rallies, discussion groups, and Christian religious events. It offers athletic, weapons, and military-style training courses, which are open to the public. And it supports orphanages and other charitable activities.

Pompeo says that the group “provides paramilitary-style training to neo-Nazis and white supremacists, and it plays a prominent role in trying to rally like-minded Europeans and Americans into a common front against their perceived enemies.” Even if that were true, such activities are not illegal — not even in the US. They are also not intrinsically dangerous — certainly not enough to justify the “terrorist” label and US government sanctions.

Pompeo goes on to explain that two Swedes who “attended” a RIM training course later carried out bombings in Sweden — crimes for which they were convicted. He also says that “the Swedish prosecutor credited RIM for their terrorist radicalization and relevant training.” But Pompeo provides no evidence that RIM encouraged the Swedes to carry out any illegal or terrorist acts, or that any RIM leader knew of any criminal act that they may have been planning.

The US government’s action against this little-known Russian group seems to be more a publicity gesture by a beleaguered administration than a serious effort to counter any real threat. Fighting terrorism is, of course, a priority task for US authorities. But they should act in a principled and effective way, and only against those who actually threaten “the national security and foreign policy of the United States.”

On Feb. 25, 1994, Baruch Goldstein carried out a mass shooting of Palestinians at a mosque in Hebron. The US-born Israeli killed 29 worshippers, and wounded 125. He received training to carry out this shooting as an Israeli soldier. His Zionist radicalization apparently took root while attending a Yeshiva Jewish school in Brooklyn, New York, and while serving with the Israeli military. On the basis of the justifications given by Pompeo for calling RIM a “white supremacist terrorist group,” should the US government designate the Israel Defense Forces a “Jewish supremacist terrorist” organization because it provided Goldstein with “relevant training” for mass killing, and because it tries “to rally like-minded” people “into a common front against their perceived enemies”?

If what the US government says about RIM is true, why are authorities in Russia and Sweden — who are presumably more familiar with the group than officials in the US — seemingly less concerned about its activities than Secretary Pompeo? No Russian or Swedish agency, it’s worth noting, has designated RIM as a terrorist group.

Does Pompeo really believe that it’s wrong to “rally like-minded” people “into a common front against their perceived enemies”? Isn’t that what American presidents have often done? Isn’t that what every venerated fighter for freedom and justice throughout history has done?

It’s likely that Russian officials have explained to the US government that their own authorities are aware of RIM and its activities, and that, however unwelcome those activities might be, they are not illegal. Russian authorities may have also pointed out that, in both Russia and the US, “paramilitary-style training” is legal, and that holding dissident or unpopular views, including those of RIM, is likewise not forbidden.

If Secretary Pompeo is serious about what he says, shouldn’t the standards he cites be applied conscientiously here in the United States? Should the US government introduce mass screening to ban “white supremacists” from membership in gun clubs, practicing in rifle ranges, and service in police forces? Should the US armed forces refuse to accept young men who hold “white supremacist” views — that is, views in line with those of nearly all American presidents and military officers during most of this country’s history? 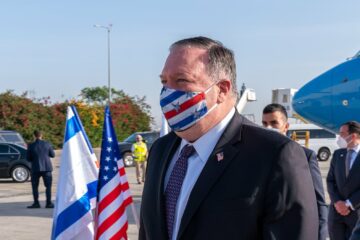 Actually, our politicians aren’t far from the truth. I never saw Russia as the ever loving peace of a country. You got to understand, jews only want Israel to be the a saint of the world, while the rest of the world is in turmoil. It has nothing to do with political power this is about the promised prosperity that is described in the book of Revelations, which is asinine because none of their books speak of God making his kingdom in Palestine/Israel. In the book of Revelations it writes about Israel, a new Israel, not the one we know. This new Israel could be Germany for all we know. It also talks about a new Babylon, etc, These tribal jews think God’s on their side because we keep winning… Read more »

International relations are increasingly disrespectful or jewish. Last President US election was nullified because of alleged foreign interference (Russian not Mexican or Israel). Same congress and president sign a law violating “sovereignty ” interfering in EUripe for the sake of inviolate , jew interests. And now the stooge Pompei demands Russia oppress the current dissidents called Christian Nationals . Where are the borders ? Who is the “elected” leader , who instructs American intruders his mission exceeds his authority and mind their own business. Naturally foreign secretary is not representing law nor Americans but the jew interest . Mr. Putin understands this because he serves the same sovereign. It isn’t funny but we may as well laugh. Government is just another vulgar , jew comedy.

OK liberals and CONservatives. Here’s yet more proof of who really controls our government.
How much more proof do you need to get this through your thick skulls? How much more obvious can it be? The USA is controlled by a hostile ethno-religious group with HQ in the mideast. And it ain’t the arabs