US PRESIDENT Donald Trump told a pro-Israel conference Saturday night that American Jews should “love Israel” even more than they do already. He also asked for Jewish votes, because he promised he, unlike Democratic candidates, he said, would not do anything to threaten Jewish wealth or its continuing accumulation.

Those comments, to the Israeli American Council advocacy group in Florida, drew quick criticism from opponents. In his 45-minute speech to an audience of more than 4,300, the president criticized American Jews who, he said, were not sufficiently supportive of the Jewish state.

“You have people — Jewish people — and they are great people and they don’t love Israel enough,” he said.

The vigorously pro-Israel crowd in Hollywood, Florida, cheered the president with chants of “Four more years!” and loud applause.

Later, Trump told an anecdote about people saying that he wouldn’t step down after a second term. “So now we have to start thinking about that, because it’s not a bad idea,” Trump said. The audience responded with chants of “12 more years.”

Trump was welcomed to the stage by Miriam and Sheldon Adelson, who fund the IAC and who donated $30 million to Trump’s campaign in the final months of the 2016 race.

“You have to vote for me, you have no choice,” Trump said. “You’re not going to vote for Pocahontas, I can tell you that,” referring to Senator Elizabeth Warren of Massachusetts, in a dig at her claiming Native American ancestry.

“You’re not going to vote for the wealth tax,” he went on. “Let’s take 100 percent of your wealth away. No, no. Even if you don’t like me — and some of you don’t; some of you, don’t like at all, actually — and you’re going to be my biggest supporters because you’ll be out of business in about 15 minutes.”

Speaking about finding a location for the US Embassy in Israel, he told the audience, “A lot of you are in the real estate business. I know you very well, you’re brutal realtors.”

Trump said that when making the decision to move the embassy, he ignored calls from “countries you’ve never even heard of,” along with powerful kings, queens, presidents and prime ministers. ”Don’t do it. Don’t do it, please. Don’t do it,” they implored, he said. “But unlike other politicians, I kept my promises.”

In 2015, Trump, then a candidate, told the Republican Jewish Coalition that “you’re not going to support me because I don’t want your money. You want to control your politicians, that’s fine.”

Throughout his speech, Trump boasted about his Israel policies — with a special emphasis on moving the US embassy from Tel Aviv to Jerusalem, recognizing Israeli sovereignty over the Golan Heights, cutting aid to the Palestinians, and withdrawing the United States from the Iran nuclear deal.

He said he made the Golan recognition decision within a matter of moments, after discussing it with US Ambassador to Israel David Friedman. “Fifty-two years, and I go bing, and it’s done,” he said.

Trump said that his son-in-law and senior adviser Jared Kushner was working on hammering out a Israeli-Palestinian peace proposal. “If Jared Kushner can’t do it, it can’t be done,” he said.

The president also castigated the Obama administration as hostile to Israel. “I don’t think they liked Israel too much, I’m sorry,” he said. “After eight years [in] which our alliance was undermined and neglected, I am happy to report the United States-Israeli relationship is stronger now than ever before.”

Source: based on an article at Times of Israel; National Vanguard correspondents

Somewhere Behind the Rainbow
Jewish Site Claims LBJ Was a Jew
In Praise of James Petras
"Death to Jews" Facebook Campaign
Divestment From Israel a Major Issue for Protestant Churches
Pink Floyd "Anti-Semitic"?
The Hard Truth: We Are Not Going to Be Able to Vote Ourselves Out of this Mess
British Peer and Activists Join Palestinians, Demand Apology for Balfour Declaration
Tags:Donald TrumpDonald Trump's Israel first policyIsraelIsraeli American Council

“Called the Anti-Semitism Accountability Project, or A.S.A.P., the project was described by WJC president as both an NGO and a super PAC, with the mission of targeting politicians at any level who engage in antisemitic discourse.

Asked about US President Donald Trump, who has also made remarks considered by many antisemitic, including accusing American Jews who vote Democrat of being “disloyal,” the philanthropist responded that he didn’t believe that Trump had a single “antisemitic bone” in his body.”

At least now it is out in the open. The Jews have always wanted to hinder people from speaking, as Paul said: “For you, brothers, became imitators of the churches of God in Christ Jesus that are in Judea. For you suffered the same things from your own countrymen as they did from the Jews, who killed both the Lord Jesus and the prophets, and drove us out, and displease God and oppose all mankind by hindering us from speaking to the Gentiles that they might be saved—so as always to fill up the measure of their sins. But wrath has come upon them at last! “(1 Thessalonians 2:14-16) Very few clergy will quote this now. Many have tried to say that it is a forgery. I think it is… Read more » 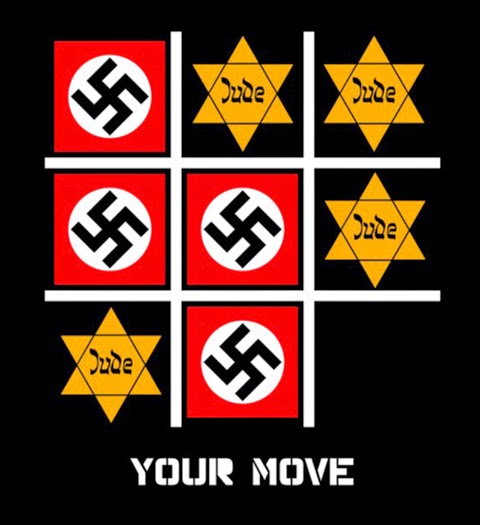 “Q” We Are Saving (((Israel))) For Last Very Specific Reason Mot Mentioned A Single Time.
I Suspect Trump Is Playing A Long Game, He Is After All Backed By The U.S. Military, & He Is One VERY Smart Cookie. After All…”Q” Post 3585 Project Looking Glass, Located At Area 51.
By The End Of 2021 I Think Things On This Planet Are Gonna Change In A BIG WAY.

The phony outfit styled Daily Stormer compared Trump to Hitler when he was campaigning for Top Federal Agent at Washington city. The Alt-right wasn’t far behind them.

This entire episode of the “Trump show” is disgusting. I always figured Trump was down with the Jews for surrounding himself with Jew bankers and lawyers but this is too much. Get ready for open season on white people. Trump greatly disappoints all of us with his endless support for Israel and the criminal Jews. He even knows that it is this group of bloodthirsty tyrants that are after him now, yet he keep doing favors for these creeps and passing bills to protect them from the rest of the world that KNOWS they are all murderous genocidal nutcases. This is one time when I am thoroughly confused. God save us all from these genetically aberrant psychotics.