Talk about disgusting. This is so unbelievably shameless I’m not sure if it’s authentic or a parody published by the Daily Stormer.

Note to Jews who don’t like anti-Semitic stereotypes: Stop personifying them, get your hands out of our pockets, and return the hundreds of billions you’ve embezzled from us in the last few decades alone. — Dissident Millennial

Are you a Holocaust survivor who was interned in a Ghetto?

Are you a child of a Holocaust survivor who was interned in a Ghetto?

You may be entitled to a large sum of money!

Even if you are already receiving compensation from the Claims Conference or from the German authorities, including the German Pension Insurance you may be eligible to receive additional payments.

The pension is paid even to those who were interned for a short period of time in a Ghetto (including Ghettos in Poland, Romania (New!), Czernowitz, Shanghai, Sofia, Thessaloniki, Transnistria, Amsterdam, Lithuania, Latvia and Belarus and many more). The possibilities are for a one-time retroactive compensation, as well as a monthly payment from the German Social Security.

Who is entitled to compensation?

Any individual who was interned in a Ghetto, even for a short while, may be entitled to a monthly payment as well as a one-time retroactive payment – in some instances dated back to the year 1997.

A widow(er) of a Holocaust survivor is also eligible for a pension from Germany that would have been paid to the deceased spouse, including cases in which the spouse has been deceased for many years.

This claim can be filed even if you are already receiving a monthly reparation payment from the Claims Conference or directly from Germany (BEG, German Pension Insurance or BADV).

If you are an heir of a ghetto survivor, and the survivor or their spouse was alive on June 27th 2002, you may be entitled to a one-time payment.

I Survived the Bombing of Dresden and Continue to Believe it Was a War Crime
Everything Good Was Invented by Jews
The Leo Frank Case: A Pseudo-History
Amazon Stomps on Free Speech -- Selectively Bans Pro-White and Judeo-Critical Content
More About the Jews
DNA Test Explodes Rudolf Hess Doppelgänger Theory
A Story I Heard Somewhere Before
The Importance of Leadership
Tags:Holocaust SurvivorsJewsreparationsShoah businessWorld War 2

Video of the Day: Glenn Beck Shows Why We are Not Conservatives

Until the Last Star in the Universe Ceases to Shine

Living in a ghetto is their preference. They have lived in ghettos for a thousand years. Of course, if they were prevented from living in them they would now expect compensation for this impost.

Unbelievable. How many rode out the war in the USSR? Birth certificates faked to add years and collect pensions. It was a WORLD war in which tens of millions died, but the chosenites get reparations. I blame the United States.

During the impeachment hearings Gordon Sondland (EU US Ambassador) introduced himself as a child of holohoax survivors despite that his mother took off for Uruguay in ’37 and his father’s war history is rather murky because some sources place him as one of the fighters in French Resistance in France, and some in the French Foreign Legion in Africa.

Anyway if that’s the truth that means his father would be the only Jew that ever served in French Foreign Legion.

Jews, Never ever forget the holocaust…….is our greatest ever swindle, and needs to endure for as long as possible.

The jews are claiming that 60% of those arrested in New York City for “anti-semitic” crimes in 2019 were white:

But look at the photos of “whites” in the New York prison system:

Not a single white (read: Caucasian) among these Hispanic mystery meats! That’s how dishonest (nothing new there) and deep-rooted Jewish hatred is for us and how desperate they are to implicate our people in crime stats and acts of “antisemitism.”

How Zionism works Pretend that Zionism is simply about establishing a homeland for the Jews that will serve as a sanctuary where they may live peacefully out of the reach of “anti-Semites” Start a world war Claim that there are six million dead or dying Jews If the hoax doesn’t work at the first attempt, start another world war and exploit the ensuing chaos from the first to take control of Russia; settle old scores with the Rus for driving you out of Khazaria Claim to be “God’s Chosen People”, and trick the world’s nations into letting you seize another people’s land on a false prospectus Dispossess the indigenous population of their homes and land, and be sure to treat them with such contempt that they resist the occupation with… Read more »

WW2 has been over for 75 years. The holocaust ™ of about 300,000 jews ended at that time. The money grab never ends. First reparations for anyone that was in the camps. Then for anyone living in the jewish ghettos. Now it includes survivors of those who were in the ghettos. Every time some long lost piece of valuable art, coins or jewelry is found in Europe, jews and their organizations come forward to claim it was stolen from jews by the “nazis.” They try to shake down railway companies who supposedly had a hand in transporting jews to the camps. The jews don’t worship any god. They worship money. Always have. That is all the holocaust ™ racket is about, besides being used to get a pass on all… Read more »

Greetings Punk Potok. The 300,000 figure is comprised mainly of those who died of old age, typhus and because the allies bombed Germany’s food and transport infrastructure. Are these victims of a holocaust?

Evil Himmler stated he would execute any members of the SS who took as little as one mark or a cigarette from a jew.

“Note to Jews…” Pointless, as they will heed nothing we say without the requisite power needed to encourage their respect.

Better to expend the effort that’s otherwise wasted talking to them by speaking strictly to our own to move them into service to our own people. 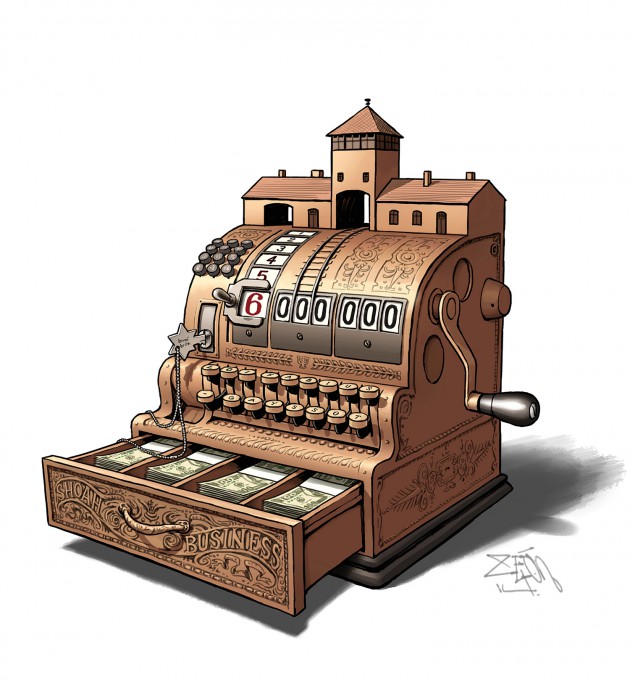