On Thursday the Nordic Resistance Movement held its first public activity on Iceland.

THE Nordic Resistance Movement has been established in Iceland for some time, just as it has been in the rest of the Nordics. Since its establishment, the Icelandic branch has continued to grow, and as such it was high time for the first public activity in the country. This took place on 5 September in the capital Reykjavik. Over twenty activists set up in the city centre with two flags and distributed leaflets.

The weather gods provided some light rain at the beginning of the activity, but the leafleting still went well. After a while the rain stopped, and a little after that the police turned up to investigate the situation.

The interest from the media was considerable, and journalists swarmed around the area brandishing their cameras.

After giving out leaflets and talking with people for just over an hour and a half, the activity in Reykjavik was concluded. The activists then recharged with a bite to eat and drove on to Akranes, north of the capital. There they split into two groups. One group stood outside a shopping centre and handed out leaflets, while the other put up stickers and distributed leaflets directly to houses.

The police showed up here as well, after a whining shop owner phoned them and expressed his dislike of freedom of speech. The shop owner also threatened to drive the activists away with a water hose if the police didn’t disperse them. Naturally the Resistance Men stayed where they were, and the threat proved to lack any substance.

The activity continued without any more disruption, and the Nordic Resistance Movement’s first public activity in Iceland proved to be a great success. 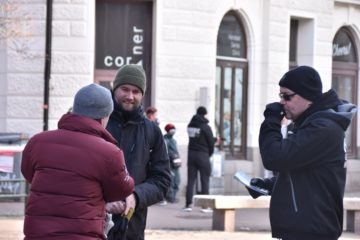 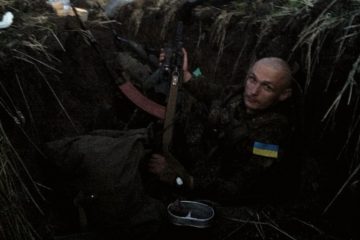 Excellent ! Another version of the Proud Boys !

Do not sully the good name of the Nordic Resistance Movement by equating them with a group of intellectually-challenged, ideologically-starved kosher Magatards. Nordic Resistance Movement are the world’s foremost Nationalsocialist movement, and unlike other groups who use that word – ‘movement’ – NRM actually merit it! They are uncompromising, unequivocal Nationalsocialists who learned very early on that a position of no compromise, no weakness, is what people respect, even if they do not (yet) agree with the worldview as written. In time, circumstances will bring many thousands more active members to the NRM. Unlike the USA, which has within it’s borders well over 100 MILLION non-whites, the Nordland’s racial situation is realistically logistically reparable, if both genius and will are present. And within the NRM, they ARE present, in abundance!… Read more »

Would be great training, No?

This is the problem with you Americans. You have these wonderful constitutional freedoms, yet instead of doing things yourselves, you want OUTSIDERS to come into your country and do it for you.

Do you honestly think that is a good message for the world to hear? YOU need the training, they don’t.

11B20
Reply to  Hatecrime Hotline

Bancroft Hall’s silly post notwithstanding, I am not aware of anyone wanting outsiders to come into our country and take care of business for us. Given white gun ownership and proficiency with said weapons, if the SHTF we are more than capable of fighting back, and it won’t go well for our enemies. And what is this crap about how WE need the training? Do you have any idea how many white combat veterans we now have in the USA? And I’ not talking old guys. I’m talking of the younger guys that were in “combat arms” specialties and saw action in Iraq and/or Afghanistan over the last 15 years. Tens of thousands. Maybe more. All the pro-white groups combined in Europe Don’t have nearly the numbers or experience to… Read more »

Hatecrime Hotline
Reply to  11B20

For DECADES, white men in the USA have been saying, “when the SHTF, when the SHTF”. The S was HTF back in the 1960s when Pierce and Dr Oliver were doing their damnedest to inform the 90% of the US population that was still white that time was RAPIDLY running out. NOW, the possibility of the USA ever becoming an exclusively Aryan nation from coast to coast, sea to shining sea has vaporized FOREVER. Why? Because men kept saying “when the SHTF”, when the Shit WAS hitting the fan! Hollywood and selective reading has coloured your thinking, whereby you assume that the SHTF equals spontaneous outbreaks of mass violence involving patriotic militias against government groups, or hordes of Third Worlders breaking into white homes to slaughter all they see. You… Read more »

The 1960s South exhausted itself fighting to maintain its White establishments. We ask nothing of the people outside Dixie Land, because it would be a waste of time. In fact northern interlopers came down to promote forced amalgamation. Our gallant effort was smothered by Federal tyranny.

What a wonderful example of a properly-conducted peaceful protest. This celebrated was marred by the belligerent shopkeeper. The event should be repeated every year at that venue and the police invited in advance to protect the protesters from this unpatriotic individual.