TODAY the Daily Mail, in the second part of their editorial section, published an attack on Penguin Books and National Vanguard as a result of our story on the new bestselling book How They Rule the World by former EU counterintelligence chief Pedro Baños. The hypersensitive, hyper-censorious Jews became unhinged primarily because Baños had used an image of an octopus’s tentacles on the cover of his book (seriously, they actually believe the tentacles are somehow “anti-Semitic” and “wrong” since some people 75 or 100 years ago made editorial cartoons about Jewish power using vaguely similar images) — and because Baños mentioned that the Rothschild family had a lot of money and power. (The fearful editors at Penguin removed that harmless statement from the English-language edition, by the way. What does that tell you?)

Saying that the Rothschilds have a lot of wealth and power is like saying that lemons are sour. It’s true and everyone knows it.

But for some reason or other, a certain group felt obliged to start screaming. It’s almost enough to make you think that they have something to hide.

The Mail editorial writer is confused about a number of things: NV is the online magazine supporting the National Alliance, not a group in itself; we never stated that Baños is our “favorite author”; we did not “defend” Penguin Books (though we did sigh at their craven PC cowardice); and the hack somewhat hysterically, and totally predictably, trots out the old anti-White “neo-Nazi” trope, as if screaming and spitting and calling names could change facts.

The Mail is often confused — and even more often subservient.

Here’s the relevant section of the Mail’s editorial:

Anti-Semitism and a Question for Penguin Books

The American neo-Nazi group called National Vanguard has a new favourite author. He is a Spanish colonel by the name of Pedro Banos, whose book, How They Rule The World, claims the Rothschilds are pulling the strings of the global economy (and who has previously suggested that Israel was implicated in the assassination of President John F. Kennedy).

Last week, National Vanguard came to the defence of Colonel Banos’s British publishers, who are under pressure to stop distributing his book (its cover depicts the tentacles of a giant octopus, a classic image of anti-Semitic tracts).

So far, so unsurprising. What is surprising — shocking, in fact — is the identity of Banos’s English publishers: Ebury, an imprint of Penguin Books.

A number of Penguin’s distinguished authors are outraged. Their fury is not assuaged by the fact that Penguin had cut out the references to Jewish world domination from the English version of the book: it remains a mish-mash of tired old conspiracy theories favoured by the hard-Left.

Indeed, Penguin defends itself by claiming that the ‘octopus’ image on the book’s cover is not anti-Semitic but ‘anti-Imperialist’.

This might help explain why the Corbynite Labour MP, Chris Williamson, belatedly suspended from the party for his trolling of the British Jewish community, had previously defended Colonel Banos, a Spanish socialist, in the House of Commons.

But if we are talking about control, Penguin is 75 per cent owned by the German publisher Bertelsmann. And Bertelsmann is publishing the book in Germany (though, after pressure from the German Jewish community, it removed the octopus image from the book’s cover).

It was only in 2002 that Bertelsmann revealed the company’s legend that it opposed the Nazis had been a convenient fiction. It had actually been responsible for many Nazi publications, including The Christmas Book Of The Hitler Youth.

Bertelsmann’s then boss, Heinrich Mohn, was a member of the SS patrons’ group, thus funding those responsible for implementing the mass extermination of European Jewry.

You’d think Bertelsmann might have passed up on the opportunity to promote the author of conspiracy theories about ‘the Rothschilds’, given that the same family was the target of Nazi propaganda about Jewish ‘tentacles’ enmeshing the world.

Bertelsmann/Penguin are being urged by National Vanguard to stand by their man. The Neo-Nazi group declared: ‘Does anyone doubt that the super-wealthy Rothschilds wield incalculable power? What an Alice-in-Wonderland-style prison the Jews have built for us.

‘Question for Penguin Books and its German owners: how do you like your new friends?

The “how do you like your new friends” snipe is just the Mail’s editorial hack attacking the truth-bringing messenger by saying, “look, a BAAAD person agrees with you! — therefore you are wrong.” Not correct, and just a cheap shot — which I guess is all you can make when you’re factually in the wrong.

Baños is right. National Vanguard is right. Everybody sane agrees that, as National Vanguard states, “the super-wealthy Rothschilds wield incalculable power.” No one doubts this. Yet we’re not supposed to say it. This is an Alice-in-Wonderland-style prison.

Over and over again, the people that the Establishment says are “hateful” and “bad” — and unacceptable as “new friends” — turn out to be right.

And the more intelligent, perceptive people are picking up on that. 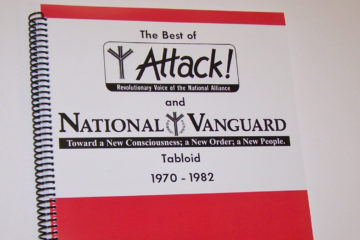 What a shame, because the Daily Mail is one of the main news sources I use to tell me what’s really going on in America, especially regarding minority criminality and murders of whites. All the stuff our own media covers up or minimizes.