Is There Intelligent Life on Earth? (part 6)

THE Skeptical Inquirer, a quarterly published in Buffalo, New York, and now completing its seventh year, is a praiseworthy periodical. I have read it with interest since its first issue. I admire the men who write for it and divert time and energy from their own research to deal exhaustively with topics that can have no interest for them, other than their altruistic wish to instruct our contemporaries. But it is also a publication that makes me profoundly uneasy. I can whole-heartedly praise the exertion and devotion of the firemen in a town in which arson is rife, but I can’t help feeling at the same time that the need for them to work so hard is something to worry about.

Get a file of the Skeptical Inquirer and read through it. It will turn your mind. It will also probably make you wish that you knew of another habitable planet and how to get to it.

Some individual who has been accorded scientific standing does “research” in biographical directories and discovers that, as you and I would think quite likely, the number of successful professional athletes born under the “sign” of some one planet, as defined in the astrological hocus-pocus, is somewhat greater than the number born when some other planet is “ascendent.” And when the lucky planet happens to be Mars and the excess of births under his benign influence yields a piddling percentage by application of the hoary old binomial formula to a total number too small to admit of that application, the great “scientist” becomes as excited as an evangelist who has just composed a really hot gospel and starts shouting urbi et orbi. And rational men have to sit down and laboriously demonstrate, with scientific precision, that the piffle is piffle!

The old hoax of Velikovsky, who, in the manner of theologians, tried to accumulate enough learned footnotes and irrelevant data to confuse his readers until they were willing to believe that Yahweh played a pin-ball game with the planets to keep the sun shining on one spot in Palestine long enough for a probably mythical Jew to slaughter more Semites whose country Yahweh’s barbarous pets wanted to steal — that old hoax seemed extinct, but there were embers under the ashes, and such is the infinite credulity of the ignorant that the blaze flared up again and the pompiers of the Skeptical Inquirer rushed to extinguish it.

A passel of professed scientists — perhaps itching to see their names in newspapers, perhaps scenting fast bucks from grateful fakirs and their flocks, perhaps only high on transcendental hootch — spend years abusing everything from spectrographs to computers to prove the “authenticity” of the painted rag called the Holy Shroud, and sober men have to waste their time and effort to prove that an obvious hoax is a hoax.

Packs of laboratory technicians with a few of their supervisors court the beaming adulation of incurably sentimental women and professional rabble-rousers by setting themselves up as “creation scientists,” nitpicking about some details, which they usually misstate, in the theory of biological evolution, and inviting us to admire the cleverness of old Yahweh as he polished up a typhoid bacillus and sicked it on the improved ape that was the best handiwork of which the old bungler was capable. It would seem odd, if we didn’t look at the state of the market today, that the precious “creation scientists” are always peddling old Yahweh, when dozens of more reasonable and more moral creators are available in any manual of mythology, but they know what god will start the yokels to dancing sarabands around legislatures and gesticulating with ballots. And reasonable men must rush to another blaze of folly and pump fact and logic on it.

A True Believer, full of Christian righteousness and veracity, carves a fair imitation of human footprints in cretacious limestone to prove that careless old Yahweh manufactured anthropoid giants at the time he was making dinosaurs — nothing surely can be more godly than fraud to put that wicked old Darwin in his place — and the weary staff of the Skeptical Inquirer must send someone to photograph the footprint and show that it is a hoax.

And so it goes, on and on and on. At the very time that the “flying saucer” business is going bankrupt, a respected astronomer, enraptured by an opportunity to exhibit his unlovely mug to the millions who stare at their boob-tubes every night, sets himself up as the pontiff of U.F.O.’s and misrepresents the facts about some supposed sightings of the devilishly elusive machines.19 Hysterical housewives, who have read all about the horrible Big Foots who lurk in the wilds of Montana and British Columbia, see one in Buena Park, California, right outside their apartment buildings. The saurian, left over from the Mesozoic, continues to paddle around in Loch Ness. A wily Japanese thinks pictures onto film in cameras. The Xerox Corporation, which markets second-rate copying machines and second-rate typewriters, magnanimously furthers the enlightenment of all mankind by providing drivel about haunted houses, jaunts aboard “flying saucers,” “Bermuda Triangles,” and similar slop for the edification of children in high schools — perhaps in the hope that with minds so primed with scientific learning they’ll be ready to buy a Xerox when they get out of school. On an arid plateau in Peru some persons resident there a thousand years ago scratched huge designs on the ground, obviously for the guidance of “astronauts” in space-craft from superior civilizations only a few light-years away from us. But I can’t go on. Read through the files yourself: your stomach is probably better than mine.

It is still widely believed by the uninformed public that college professors are, ex officio, educated and rational. The Skeptical Inquirer, Fall 1980, reported the results of an investigation to determine how many of these wise men believed the hokum about “Extra-Sensory Perception” to be established with a high degree of probability or absolute certainty. Here are the percentages of believers found in the several areas of study. Humanities, arts, and education, 73-79%. Social sciences, 66%. Natural sciences, 55%. Psychology, 34%. How many college professors carry garlic in their pockets as a protection against vampires has not yet been determined.

What worries me is that common sense seems to be dwindling to the point of extinction. The minds of men whom our contemporaries consider educated are regressing to the level of the most ignorant peasant on a Mediaeval manor. There is something terrifying in the spectacle of men who hold degrees in the genuine sciences and assemble vast arrays of elaborate scientific equipment to “prove” the authenticity of a “Holy Shroud,” and thus make it necessary to assemble more equipment and conduct long and painstaking research to prove what any half-way educated and rational man would have known from the very first. And the same sotie is performed whenever some prestidigitator claims that he can bend spoons by thinking about them. Is there any limit to the gullibility of “highly qualified scientists”?

I sometimes have a vision of scores of great scientists and tons of elaborate and very expensive laboratory equipment assembled about a pond into which they drop horsehairs to determine whether the percentage that turn into tadpoles is significant by the binomial formula. If hairs from Standard-breeds don’t work, get some from Appaloosas. Then try Percherons and Arabians: their hairs may make tadpoles better. And no one can say that the hairs of horses do not turn into tadpoles until you have made exhaustive scientific tests of hairs from every known breed of horses — and then someone will turn up to prove that the negative results are all wrong, because tadpoles come from the hairs of horses who eat the variety of four-leaved clover that grows in a hidden valley in Afghanistan, so the assembled scientists and their equipment will start all over.

That vision of mine may be just a nightmare, of course, but perhaps I have a dynamic psyche with powers of precognition so that it can see through a time-warp into the next decade.

We are living in a time in which a large part of the “scientific community” is willing to believe that anything is possible and then try to prove it by “exhaustive tests.”

The hard-headed scientists of my youth are gone, like the mammoth (which, oddly enough, hasn’t been seen recently in Montana or Buena Park, California). Common sense and logic have become as obsolete as halberds and bustles.

I don’t know how this happened, but I think I can identify some contributory factors.

Humans: Not as Genetically Identical as We Thought
Nature Is God's Word
A Rose by Another Name
The Ultimate Secret of Pearl Harbor
Religion, and How to Tell a Human from a Sub-Human
Tourist Attractions
What Jesus Said
Secular Theology
Tags:common senseGullibilityIntelligenceLiberty Bell MagazineLifeRevilo P. OliverScience

Up From Christianity: An Ascent

Is There Intelligent Life on Earth? (part 7) 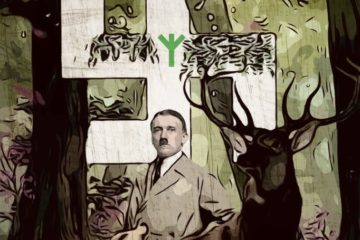 There is something terrifying in the spectacle of men who hold degrees in the genuine sciences and assemble vast arrays of elaborate scientific equipment to “prove” the authenticity of a “Holy Shroud,” and thus make it necessary to assemble more equipment and conduct long and painstaking research to prove what any half-way educated and rational man would have known from the very first. Jews provide the best evidence for the shroud being a hoax. Previously, I have written about the “raising of Lazarus” as a staged, public protest against the onerously expensive Para Aduma purification ritual. Because Jews were burying their loved ones alive at the decree of a Temple priest making the binding decision of death, no matter the actual physical condition of the individual in question; it was… Read more »

Is There Intelligent Life on Earth? (part 6)