Local Christians had planned an “interfaith prayer vigil”; local Jews had set up a GoFundMe page.

AN INCIDENT at a Corydon Avenue cafe that was originally reported as one of Winnipeg’s worst-ever hate crimes was apparently staged, said police.

Three owners of the BerMax Caffé were arrested Wednesday and charged with public mischief, which involves intent to mislead and causing an officer to investigate an incident based on false information.


The cafe was allegedly robbed, the interior trashed and the walls spray-painted with anti-Semitic graffiti on April 18, although investigators now say that was all staged by the owners.

At the time, Winnipeg police Const. Rob Carver told media the attack was one of the “worst” hate crimes he had seen as a police officer.

Police Chief Danny Smyth said Wednesday the investigation has been a significant waste of police resources.

“Over 25 officers have invested nearly 1,000 hours through a busy holiday weekend trying to bring this investigation to a close,” he said.

“In the end, we found evidence of a crime. It just wasn’t a hate crime.”

The incident sparked a large outpouring of support from people in Winnipeg’s Jewish community and the city at large, including an interfaith prayer vigil planned by a local church for Thursday night.

“There have been some new developments in the BerMax Caffé situation,” said a spokesperson for Westworth United Church. “These are being reviewed, and an announcement on the status of the interfaith prayer vigil will follow.”

Alexander, Oxana and Maxim Berent are all facing charges and have reportedly been released on a promise to appear.

Winnipeg mayor Brian Bowman spoke out against the alleged hate crime when it was first reported. He said if the charges against the owners are proven, it will represent a major breach of trust within the community, as well as a “complete waste of police resources”.

“If the charges are upheld by a court, it’s disgusting,” Bowman said.

“We are shocked and deeply disturbed by today’s news,” said the Winnipeg Jewish Federation in a statement Wednesday afternoon.

“It is deplorable that anyone would make false allegations of anti-Semitism, especially claims of such a serious nature, for any kind of gain,” the organization said.

“Filing false complaints of criminal acts of anti-Semitism [is] not only illegal, they undermine the important work necessary to counter anti-Semitism and hate in all forms.”

A GoFundMe page had been set up to support the café after a previous incident last month.

Robbie Kfir Mulder-Kiesman, who set up the fundraiser, said in a statement that fundraising efforts have been suspended until more information is available.

“We are aware of the announcements made and have been taken completely off guard by the information,” said Mulder-Kiesman.

“We took on this effort with the best intentions and hope that further information comes to light that provides the much needed answers we need in this situation.”

Is There Intelligent Life on Earth? (part 2)

“We…have been taken completely off guard by the information.” So you weren’t aware that Jews lie, cheat, and steal for gain. How’s decades of life under a rock been for you?

I made a video on this Jew and Jewess here “The Jew Who Cried Wolf”, Feel free to post it on this website: https://www.bitchute.com/video/d1ztSsFyGi96/

HA ha ha, the comment section on Global News for this article was closed down. I went searching for their funding page but all I got was their Yelp reviews. People gave them one star for the fake hate crime they staged and trying to raise money from the goyim. Before their fiasco, some ppl were giving them one star for the crappy service, terrible food and outrageous prices.

It sounds like the kind of business that Jewish lightning would strike.

Edited this image for you, relates to this story. 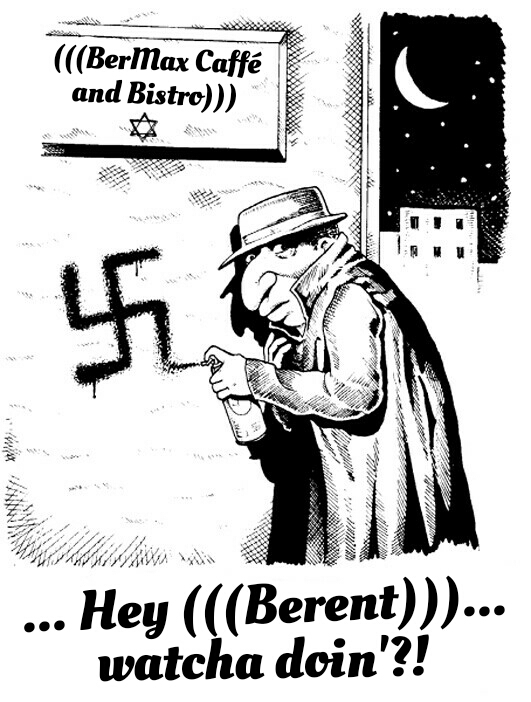 There was a ‘hate-crime’. It was committed by the hoaxers.

Meanwhile, crimes like the following are never treated as hate crimes, even though their supposed randomness is debunked when the races of the perpetrator and victim are released and reversing them would yield virtually no cases, meaning, when have you heard of an Italian or Latin woman savagely assaulting and dragging a young negroid male down the street or bashing his head in with a scooter?

Here is another. When are the jews who are society’s unelected regulators of racial discourse, going to demand that the following and innumerable similar cases of random, impulsive violence (at least a million of incidents since 1965 resulting in injuries, thousands resulting in deaths.) be treated as hate crimes? The test is simple. When was the last time an elderly white man threw a fat stupid negroid mother off of a bus resulting in fatal injuries? Reverse the racial facts of almost any unprovoked violent crime not driven purely by monetary greed or need. https://www.nydailynews.com/news/crime/ny-20190515-y7gajwyklvemhiy5wh4mff3tim-story.html . The jews’ narrow definition of hate set is out by the ADL and rabbis given media face-time, as the expression of white-supremacist actions, comments or documents relating to a crime or that simply appear… Read more »

We in the NA aren’t waiting for Jews or anyone else to do anything. It’s up to each of us to take responsibility for our race and communicate the facts, and the most effective way that’s done is organizionally. Those who sit on the sidelines, especially when the facts are known, are worse than those who are ignorant as things evolve in ways detrimental to our kind.

I’d never suggest that any whites wait for jews to act or not. I was showing how the jews ignore what their activists would scream “social injustice” at if the racial facts were reversed in thousands of non-white on white crimes. Who gave the jews authority on this in a society that was 90% white when they got it, and is at least 60% white? The large number of whites knowledgeable of this paradigm is key to growing the NA, as the paradigm won’t change no matter who is in elected office; the NA predicted Trump will accomplish nothing concrete on race, and has been proven correct (see https://nationalvanguard.org/2016/12/donald-trump-and-the-jews-who-is-using-whom/). Social norms have warped so broadly that if the jews who manage media such as CNN were to publicly support closing… Read more »

I’ll give you the authority to deny the Jews have any authority over us, just as I gave it to myself. Let’s find that authority that says “not only do we struggle to exist as all living things must in nature, but here’s why….” Cosmotheism is a source you ought to consider reviewing in this search. Yes, the NA does have a public presence that Whites we want to reach want to be a part of. It’s here at NV. It’s where each NA member is now, actively pushing our goals. It’s at the National Office where things are taking place to move us forward on our path to godhood–the Creator’s purpose. They’re not in response nor reaction to the warped social norms that are really just products of the… Read more »

Evil Narzies do not spray swastikas on Jewish stuff!

At worst, the evil Narzies would spray Jewish symbols on Jewish stuff