THERE ARE TWO types of hate crimes. The more common variety is the cynical hoax, the “Hey rabbi…” incidents of vandalism, the forced removal of muh hijab, the noose Nigerians in Chiraq and all the rest. Then you have the other version, which has been growing at an alarming rate in our dying nation. No, it’s not “real ones that actually happened.” This particular societal Saint Vitus dance involves the mistaking of ordinary items for “racism” by primitive minds taught to see this imaginary menace everywhere by the Jew. Shoelaces become lynching implements, a banana peel is “hate,” a microscope cover is a “klan” hood and now we have the unknown horrors of botanical processes.

The mayor of a South Carolina town believed she was the target of a hate crime after cars belonging to her and her husband were dusted with a mysterious, “yellow, sticky substance.”

The monsters are coming to South Carolina. The mysterious yellow sticky substance of White supremacy. Are you sure it wasn’t Oriental haters calling for “Yellow Power?” Combine the moronic and childlike mental enfeeblement of the genetic alien with endless witch hunts for evil Whites who simply don’t exist and here we are. Dem debils bee puddin yella awn muh whip.

Local and state police investigated the claims made by Lamar Mayor Darnell Byrd McPherson, who reported that on February 7 at 10 p.m. local time, someone sprayed her 2017 Symphony Silver Hyundai Elantra Sport and her husband’s soft-top 1998 Buick Roadmaster with a residue outside of their home.

Yes, we wasted lots of resources investigating the horrors of pollination. I’m not sure why you’d be surprised at this point; the number one priority is catching the root wizards and pythonesses plaguing this New Canaan. Someone must have done this, presumably the villainous White bigot who only exists on the Talmudvision and in Harvey Weinstein productions. What do you think, Encyclopedia Brown? Must have been an evil “Nazi” spraying it on, right? Wait, you don’t think so? Really? Please turn to the back of the book for the amazing solution to The Case of White Flower Power.

The material, she remembered, “got in all of the grooves” of her husband’s gray sedan.

It bee all up in dem groobs an sheeet. We pretend these creatures are human.

“My husband went out to the car to get some things out of the garage,” she told Newsweek. “He says, ‘Somebody’s painted your car!’

Imagine a Negro from a “Little Rascals” short being terrorized by “ghosts” and you’ve got some idea of the quiet dignity of these overstimulated tar monsters.

“Darnell, there’s something on your car,” she remembered him saying. “They started rubbing it, and it was this yellow, sticky substance. So it was like, What is this?”

Yo, hold up Darnell! What datt bee? We let these obvious inferiors vote and hold office. We give them special preferences and ignore their obvious incompatibility with a civilized nation. Better start rubbing it. We just dumped 100 billion shekels into this abyss.

She said her husband and the neighbor “started scraping all over” their cars to rid what she described as a “grainy substance” akin to industrial spray foam used to patch concrete.

This conclusion is understandable when you’ve never worked an honest job in your entire life and have an 80 I.Q.

Setting in was the deafening fear of an attack.

LOL, datt deafening fear doe. Strong prose game from the dinosaur media. I’m so scared I can’t even hear! It’s a real thing, look it up.

“I likened it as a hate crime because No. 1, there’s a history in our town of Lamar,” the volunteer mayor of the town with approximately 980 constituents, said. In the 1970s, racist acts were not uncommon in Lamar, where the mayor said burning crosses was once a pastime.

“What are you doing this weekend?” “Not a lot. Wanna go burn a cross?” “Sure, it’s better than sitting around being bored.”

“It ignited some fear in my spirit,” she said. “My God, who would do that?”

Our nation has a bright future.

Darlington County Sheriff’s Office Lieutenant Robby Kilgo explained that an investigation was opened to determine what the substance was on both cars. “We found it to be pollen,” Kilgo explained in an interview with Newsweek. “There was no reason for us to collect a sample.”

Though the possibility was raised that the car’s mysterious coating could have been pollen and not the result of foul play, McPherson remained convinced someone was behind it.

It was real in my mind! The important thing is it could have happened and you need to give up whatever rights you have left and how about more Thought Crime laws…

“It’s something,” she said. “Something that’s sticky that’s stuck to my car and took two different solutions to get it off.”

The one solution: back to Africa.

California: "Defund Hate, Defund ICE" Event Is Part of Nationwide Jewish Campaign
Zionist Jew Committed Most of the Recent Bomb Threats Against Jewish Centers
The Jews and the Senators
The Lost Shoelaces of Hate
Denmark: Danes Party Distributes "Anti-Asylum-Seeker" Spray to Women
The Clearest Hate Crime
Dylann Roof and the Treatment of Whites by the Legal System
Jew Who Created Thousands of Hate Hoaxes and Threats Will Not Be Extradited
Tags:HateHate crime hoaxesHate Crimes

Does Norman Finkelstein Embellish His Family's History of Suffering? 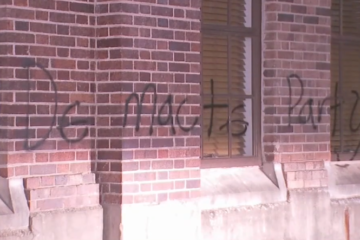 Attack by a Coward

Some have called them spooks, now I know why.