HERE WE GO AGAIN (this homicide is now being investigated as a gang-initiation crime).

Lamentably, the era of social media allows us to peer into the private lives of those who momentarily are in the news.

People we would never meet in our lives become available to us, pictures (and sometimes videos) of all their years conveniently captured and catalogued for their family and friends.

His name is Alexander Mixon. He married Taylor Paige Mixon on June 6, 2017.

He was a white man, merely doing his job. His wife is now a widow, courtesy of six black men.  [Victim lured to bogus address in Saturday homicide; several arrested, WALB.com, 11-24-18]:

Several arrests were made in a homicide that took place Saturday, according to the Albany Police Department (APD).

Alexander Mixon, 27, was fatally wounded in during an attempted robbery.

The victim was lured to the 1900 block of West Broad Avenue to deliver food, APD officials said. The victim was a Locos Grill and Pub employee.

When he arrived, which was a vacant home, the victim was approached by two men and shot while inside his vehicle, according to law enforcement.

A number of suspects were arrested and charged following the Saturday night incident.

All arrested are currently in the Dougherty County Jail.

Initial responding officers at the scene Saturday said the victim was shot in the neck and taken to the hospital in stable condition.

Alex Mixon was a newlywed, who had his whole life in front of him. Trying to do his job, he was murdered by six Black men in Albany, Georgia.

And outside of a few people in Albany, Georgia and his friends and family on Facebook, no one will know his story.

Vaya con dios, Alex. You are in my deepest thoughts and prayers, Taylor. 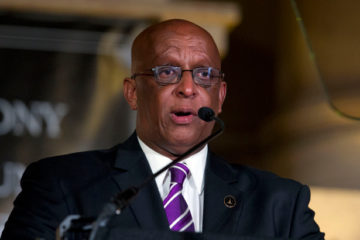 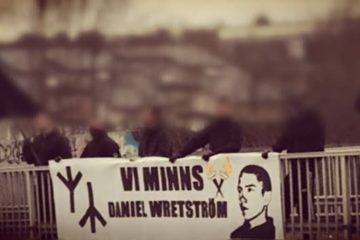 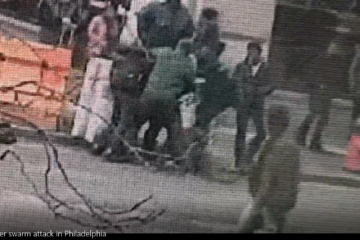 This practice has often been called (by Blacks) as “polar bear hunting.”

Do you still want these primitives in your society, White men and women?

Our jewish friends in the media and government bureaucracy call this “random” crime and the only solution is to give up our means of defense.

It’s a Final Solution, but not along the lines of the holohoax that sees a 150% survival rate with millions of “survivors” jockeying to collect payouts – still alive 75 years after they were supposedly holocausted – but in the Armenian Genocide, the Bolshevik Genocide sense – all the real genocides that saw not a single survivor in their aftermath, let alone three quarters of a century later. The real genocides that we are not allowed to remember.

After her grieving is over (if ever) will his wife Taylor Mixon dedicate her life to the proposition of ridding America of these Stone Age leftovers? Perhaps that would make an interesting project for the WN movement: to contact the survivors of savage negro violence and ask them if they will, in some way, come out and support our Cause? Yet, from past stories of this nature, too often the answer is quite the opposite. The classic example is Amy Biehl, a Stanford University graduate who journeyed to South Africa in order to “get in touch with her inner negro” and was instead brutally attacked and murdered. What did her grieving parents do? Why, the most logical thing of all: they “forgave” the negroid savages who butchered their daughter. I… Read more »

Be the first to implement your idea, “21C WN”

We’re interested in the success stories you’ll regale us with.

Unless….you’ve given up already. Your expressed cynicism indicated this is the case.

“Our quest,” 21? Who are the “our” in your hypothetical WN Movement project?

Thanks for pointing out the lighter side of this tragedy:

Yeah, the stupid names blacks give their spawn. It is of course in rebellion to anything white that they make up these stupid names, the same reason they refuse to speak English correctly, there is no other reason but anti white. I have met a couple of blacks who spoke perfect English without a black accent, one was brought up in a Catholic school and the other was from England. They are their own worst enemy, for now.

The USA is celebrating the feel-good story of Saturday, QB Jalen Hurts leading Bama to the SEC title after all those games that Tua dominated, leaving enormous swaths of white kids cheering. But I’ve been red-pilled to where I watch no network football. The antics of NFL player Eric Reid clinched it recently, but I’d long become antsy at watching 3hrs and 20mins for 25 minutes of action, and endless commercials and promotion that strained my ears, sense of decency and racial instincts. All six of the murder suspects, if over 5’11” and healthy, could’ve likely become middling college football players on scholarship – with the psychopathy to kill whites intact but dormant, redirected by ball and its promise of weed, ho’s, Camaros and BBQ’d ribs. How many negroid pro-athletes… Read more »

Will, 21c WN is right in his assessment of the problem, but naive to think simple explanation of the problem will work. If that were the case this website would have no need to exist. That being said, the idea behind his comment is sound, it just needs to be fleshed out with decent propaganda to get “normies”ready for higher understanding. Just like you don’t have to tools for calculus if you dont understand algebra. There is a website that does this regularly. It’s 4chan.org/pol/.
I wouldn’t be so fast to shit on the new guard if i were in your position.

The man in my position is interested in working with those who are attracted to the values and goals of the National Alliance, and especially those who join with us and work together on projects to help implement those goals. If that includes people in your new guard, like 21, presumably, then fine. 21 doesn’t appear to me to have a sound plan; the Alliance does. The National Alliance does not seek out victims of violent Negro predators to see if they might be interested in helping the WN cause. If they seek the Alliance out, that’s good, but it is usually after having read our material and found that they agree with it. Have I “shit on the new guard?” Really? I asked 21 who his “we” are. Twice.… Read more »

Will, If you took the time to observe the growing WN crowd online, you would get my point. The overton window is shifting. And the ever so hated millennials are pushing that window with memes.

National Alliance membership has a vetting process. Relatives of negroid crime victims aren’t a good choice if all they are seeking is payback. Nothing like that screening with those who post on 4chan, an issue as we saw with Gab. At least Stormfront had picnics so you could see who *didn’t* show of the big machers, and who were too flippant with threats or guns (should that have happened). Memes? Why is it the most pervasive jews like Soros look nothing like Shlomo Shekelstein?

Who hates the millennials? No one in the National Alliance does, so far as I can tell. As a matter of fact, the NA offers several fliers that proclaim the opposite: Love Your Race.” There isn’t any distinction offered between Whites of any age. Read here for more information about who is and isn’t eligible for membership: https://natall.com/about/what-is-the-national-alliance/ Also, towards what goals are these “hated millennials” pushing memes? One group (I will not mention who) that makes really nice posters and is very active on college and university campuses wants a multiracial society with Whites in charge and non-Whites subject to our rule here. In other words, White supremacy that actually results in White genocide, but moving at a slower pace. I believe they haven’t thought it through, to be… Read more »

Two-Timers want to be on the side that’s winning.

It’s an interesting fact that many White people are fine with forced amalgamation until a family member or friend is molested by non-Whites. They suddenly switch hats for revenge. Scalawags play both ends against the middle.