A DEADLY DISEASE is rampant in Metro Atlanta, and scientists are calling it an epidemic.

Channel 2’s Dave Huddleston spoke with researchers and doctors who said Atlanta is the epicenter of that epidemic, comparing some neighborhoods to developing African countries.

J.R. Watson is a towering man, and the only hair on his head is a handle-bar mustache.

He contracted HIV from a woman he was dating. He told Huddleston his story hoping to keep young people from making a potentially lethal mistake.

“All it took was that one time with that wrong person to change your life forever,” Watson said. “It doesn’t matter who you are, just because you live in a nice neighborhood, just because you’re alive outside of Atlanta.

But if you live in the capitol city, AIDS research officials said the number of people effected is staggering.

Del Rio said the disease shifted from one that mainly affected gay men and drug users in the late ’80s to a disease that now affects just about every population, but in particular African-Americans with limited access to health care. 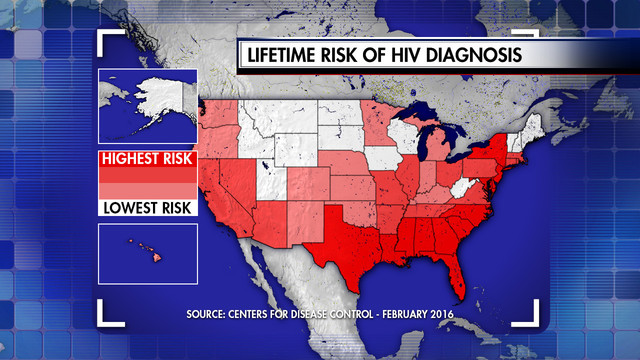 Another problem was a lack of leadership and mismanagement in Fulton County.

Ultimately the county had to return millions to the CDC.

The County Commission asked for audits of the embattled Health Department and demanded changes in procedures.

“I did meet with city officials directly and assured them that processes were in place and make sure going forward monies would be better accounted for,” Eaves said.

A recent study released by the CDC shows why that funding is so critical.

If you live in the southeast, you’re more likely to be diagnosed with HIV than any other part of the country and in Georgia the risk of diagnosis leaps to one in 51.

“We should not be having an epidemic of that proportion in a country like ours,” del Rio said. “This is not Africa, we have resources.”

Fulton County now has a new public health director and HIV programs like mobile testing units are more visible around the city. The van travels to ZIP codes with the highest number of HIV cases.

Channel 2 was there when the testing unit was by Grady Hospital. They tested more than 30 people, and two came back HIV positive.

But fortunately for Watson, HIV is no longer an automatic death sentence — if you receive treatment.

With access to antivirals he is looking forward to living a long life. His diagnosis didn’t get in the way of him finding love and he is now married.

“I fall in love with her every day and that’s no lie,” Watson said. “That’s no exaggeration.”

Obama and FDA: Let Gay Men Donate Blood
America's New Motto: "I Just Sign the Checks"
Zika Infection Transmitted by Sex Reported in Texas
The Tragedy of Chautauqua County
Corona: Flattening the Curve
Is There Any Reason for Trying to Help Haiti?
Video of the Day: Why We Can't Have Nice Things Anymore
The People's Commissar of Health Equality
Tags:AIDSAtlantaBlack AmericaCDCDiseaseDr. Carlos del RioHIV epidemic

The People’s Commissar of Health Equality

Gates Foundation Honoree: “Get Rid of All the Whites” to Increase Vaccination Rates

More zombies hooked to the drugs of the system and whitey paying the bill. Disgusting.

My days of visiting in Atlanta are over.

Atlanta is called the “Gay Black Capital of America.” HIV is spread rapidly there apparently.