I almost titled this “Simpson: The American Nietzsche” but I feel that Simpson is actually far superior to the German philosopher.

I care about life.

What I care about most is that I may find it, and that finding it I may arouse in other men to a sense of life which is in them also. I care that they should dig down to what most deeply they are, that without shame or apology or explanation but with heads thrown back, they should accept this, and avow it, and rest in it, as our fathers were taught to rest in the ‘Will of God’ — which psychologically speaking, is the same thing. I care that they should dare to stand forth before their fellows their naked selves.

And this is enough.

What happens to the Church, or Christianity, or Christian morality, or to ideas about God, really does not matter to me. Should they prove not to be a help but a hindrance to strong noble living, let them be sloughed off. After all they were never more than a means.

But the end is life — rich, true, strong, varied, exalted life — on this earth.

THOSE WERE the words of American mystic William Gayley Simpson, published in the short book Toward the Rising Sun over eighty years ago. Simpson was a man who took Christianity and the teachings of Jesus more seriously than most anyone in his day. He took Jesus at his word. Unlike most Christians, he attempted to actually live the ideals he professed to believe in. Simpson spent years in poverty wandering the country doing odds jobs (only to give away all his money) and putting himself at service to the lowest of the low.

Simpson lived this ‘Franciscan’ life for many years until he came upon the works of Friedrich Nietzsche. After reading the entirety of the philosophers’s work, he was ultimately forced to abandoned his deep faith in Christ and his humanitarian world view. Such was the price of his integrity as a thinking man and the natural outcome of his relentless truth seeking. Of course, he didn’t stop there; Simpson then came to appreciate the singular importance of race and the deadly peril facing our White Western world.

His transformation was remarkable. But what was truly impressive was that he spoke openly about everything that he had learned — even when it meant losing everything he had worked his whole life to accomplish. One by one, his close friends abandoned him. Foundations and colleges that used to pay him to speak now blacklisted him. But Simpson was not deterred, he continued to speak and write to whomever would listen for the rest of his life. He compiled his writings, which span from the 1930s to the 1970s, into a masterpiece he titled Which Way Western Man? It is without a doubt the greatest book written by an American in the 20th century.

Simpson’s fearless truth seeking was as broad as it was deep. His work is intensely personal and poetic — he speaks right to the soul of the racially conscious White man. But his thought is also worldly and clear — something which no doubt comes from his extensive knowledge of history. This union is what makes Simpson’s work the perfect starting point for Volkish Spirituality in America today. We need a clear mind but also a burning heart.

But what did Simpson propose our people believe in if not Christianity?

Echoing Nietzsche, Simpson called for a new Religion of Life. He claimed God was to be found inside ourselves — what he called the ‘divine spark’ or ‘inner light’. He knew that we didn’t need a book to find God. We didn’t need a priest to interpret God’s will. And that it was wrong for us to look back to ancient Palestine, two thousand years ago, in order to learn how best to live in our present day.

Finally, Simpson knew that our soul was intimately tied to our race — our Aryan blood — and therefore this new religion must be a religion of and for that blood. And like Nietzsche, he proclaimed that our new mission was first to ennoble ourselves and then to inspire the same in our people. He felt that we mustn’t be content with what we presently are, but must strive to remake ourselves constantly into something higher and greater.

As Volkish Believers, we must take part in the spiritual journey that consumed Simpson’s life. Because if we do, we will move that much closer to becoming the new Higher Man, who alone can save our Volk.

The final words, I will leave to the man himself:

First we must become conscious that we as a people have a soul, and that it can be lost; that in fact, it is now in terrible danger of being lost forever. But if and when we do become conscious of our own soul at last, and behold what it contains of strength and beauty, and stand before it in mingled reverence and pride, our great ones shall mark out the path that belongs to us, and shape the disciplinary measures necessary to ensure that our feet shall follow it.

And out of this will come our own , our Aryan, Nordic Bible — what else should I call it? — that will uphold before us our own ideals and traditions, the record of our supreme achievements and triumphs, the story of our saints and heroes, the admonitions of our great wise men and guides, the vision of our hopes and dreams and purposes pushed deep into the a distant future. It will be the Book of Life not of the poor or the weak or the meek, but of the strong and masterful, who by their mastery over themselves will shape their life into something ever more beautiful, in soul and body, until at last they deserve again that name with which they began, the proud, head-lifting name of “Aryan,” “the noble ones.”

It will be their book of gratitude to Life, their book of rejoicing, their cradle-song and their battle-song, and the mirror of their soul soaring over vast abysses and with eagle eye studying far horizons. It will be the supremely Yea-saying book of a people resolved at all costs to live on the heights, and to be itself, and that will rather perish than give place to any other, or serve his will.

His short novel Toward the Rising Sun can be found here.

His masterpiece Which Way Western Man? can be found here.

An earlier serialized version of his journey titled One Man’s Striving, which would later make up part of his magnum opus, can be found here.

Everything Looks Permanent Until Its Secret Is Known
What We Are
Democracy is a Kind of Death, part 6
The Tree and the Vine
Immortal Symbols
Is There Intelligent Life on Earth? (part 2)
The Flow of the River
All Flesh is Grass
Tags:LifeVolkisch MovementWilliam Gayley Simpson

The Prayer of the Flowers 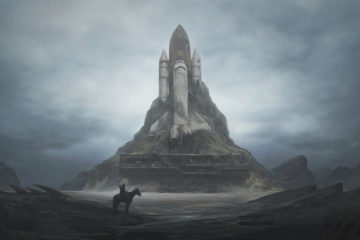