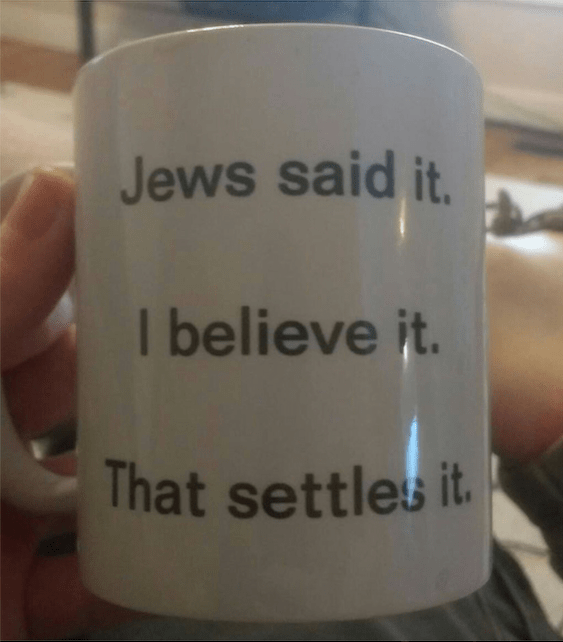 THE PUBLIC TRANSCRIPT, in our time controlled by the Jewish media, “creates the appearance of unanimity among the ruling groups and the appearance of consent among subordinates”. In topics where people feel free to have their own opinion, voices multiply like mayflies. Everyone has their own special take on why the team lost last night, for instance. This is natural. But when nearly everyone has the exact same opinion on a subject, you can be sure that an artificial dogma is being enforced.

Scott reminds us that “domination does not persist on its own momentum” but must be “sustained by continuous efforts at reinforcement, maintenance and adjustment. A good part of the maintenance work consists of the symbolization of domination by demonstrations and enactments of power.” A Jew’s work is never finished. He can never rest, never let up for even one moment.

Which brings us to the most strictly enforced public (false) consensus of today: Hitler is evil and killed six million Jews. This lie is the centerpiece of the System’s meta-narrative of White oppression. But the strange thing about the System’s form of domination is that, as Jonathan Bowden said, “[one] claims status for strength through victimhood.” So, in our upside-down world, a movie like Schindler’s List actually demonstrates the strength and power of Jewry rather than their weakness (after all, National Socialist Germany was destroyed). By ‘remembering’ past (false) episodes of repression, the Jews, and by extension the System, are really engaging in a kind of mass intimidation of the public.

Unfortunately, if a subordinate group is convinced by these — in our case bizarre — displays of all-powerfulness, then they can actually contribute to the real power of the elite. Scott notes that this situation can continue even when the elite no longer have the stomach for such attacks on the subordinate group. One wonders if the Matt Ygelsias types of today are made of the same stuff that the Bolsheviks were? On the other hand, the weakness inherent to the entire Jewish domination schema (i.e. that they pretend to be ruled by those they rule over), is identified aptly by Scott: “to exercise power in the name of another party is always to run the risk that the formal title holder will attempt to reclaim its substance as well as its form”.