Unbowed, courageous writer and scholar dies of a heart attack at age 89.

PROFESSOR ROBERT FAURISSON was a professor of French literature at the Sorbonne, and later at the University of Lyon. He was a famous scholar in the 1960s because of his work on French authors like Rimbaud. He was sufficiently famous as a literary scholar, in fact, to be invited to appear on French television. His book about Rimbaud is called A-t-on lu Rimbaud? — Has one read Rimbaud? The emphasis on the word lu (read) in the title meant that people had missed the poet’s meaning because they had not read him carefully.

The video below, by Vincent Reynouard, shows what was happening in Faurisson’s life the day before he died. The computer-pronunciation of Faurisson’s name in the video below is not quite right. It is “FOE-ris-son.”

It was not only poetry that people read with insufficient care. Faurisson, when I visited him in 2000, said that he had conducted a class wherein students were asked to read and interpret news reports. When people read the news, they often do not remember what they have read, and do not notice contradictions in what they have read, and do not derive implications. When the news is read carefully, sometimes the meaning turns out to be completely unclear. Not infrequently, the details buried within an article contradict the title or the first paragraph. With this kind of thing, Faurisson started to get into trouble, because now he was teaching skepticism toward mass propaganda. The Holocaust was part of that.

Faurisson became interested in the Holocaust in 1960 when he learned that the claims of gassings at Dachau and Buchenwald had been abandoned, according to Martin Broszat of the Institut für Zeitgeschichte in Munich. This was  remarkable news, because there had been some so-called witnesses to these alleged gassings, who, now it must be concluded, had lied. What then was the full extent of the lying?

Faurisson spent years researching the question. He traveled to Auschwitz  where he questioned officials of the museum and acquired documents, and in 1978 went public with his conclusion that there had been no gassings there. Ultimately he concluded that there was no real evidence for gassings of anybody anywhere by Hitler’s government.

Faurisson told me that the period after he published his conclusion about Auschwitz was very hard, because nobody that he knew accepted his finding. The solitude that he experienced, he said, was like having ice on his heart.

In the meantime he at least found intellectual support among like-minded people around the world, traveling to California to attend the first annual conference of the Institute for Historical Review in 1979.

Faurisson became the architect of Ernst Zündel’s defense in the Canadian “false news” trials of 1985, 1988, and 1992, in which Zündel was prosecuted for republishing a booklet called Did Six Million Really Die? The defense, masterminded by Faurisson, which set out to prove that Zündel had not published “false news” as charged, was earthshaking in its effects. Faurisson was heavily involved in preparing cross-examinations of the prosecution’s witnesses, forcing them to make embarrassing admissions. It was Faurisson who proposed that an expert on gas executions from the United States, the only country where gassing was used as a method of execution, should be procured as an expert witness for the defense. That expert was Fred Leuchter. It was Faurisson who interviewed Leuchter to determine whether he could be of use to the defense. Faurisson was apprehensive because  Leuchter said that he believed in the Holocaust, and with his curly, dark hair Faurisson was concerned that he might be Jewish — but Zündel decided to bet on Leuchter’s professional integrity, and the rest is history.

Faurisson’s reward for seeking the truth consisted of physical attacks by Jews (whom the police would not arrest), endless litigation, and recurring imprisonment. He told me that he did not keep his files at his home, “Because the police could come at any time.” In recent years, the recurring litigation became much more onerous because he had to care for his ailing wife, which he could not do if he were sent to prison. But he never bent under the pressure.

In fact, he even taunted the government. There was a telephone hotline for reporting incidents of Holocaust Denial, and Faurisson would call in to report himself. Whenever Faurisson was put on trial, the courtroom became a forum for him to present his views.

If you can momentarily forget the worst consequences that Faurisson endured, you may find something amusing about a little old man who refuses to stop saying precisely those things that people are most afraid to say and most prohibited from saying. Faurisson’s example of defiance reduced the fears of other people, and the sign of this reduction of fear is laughter. In his last years Faurisson acquired something like a countercultural following among young people in France; in particular he was befriended by the famous mulatto comedian Dieudonné.

I think that we can say that in the end, through persistence, Faurisson won. Suppose that you have the most powerful group of people in the world trying to beat you down, destroy you, or intimidate you any way they can, to shut you up, and you survive to a ripe old age without ever yielding even slightly, while gradually more and more people believe that you are right. That is winning.

He was irritated with some people who did yield under pressure. My girlfriend and I spent five hours with him on that day in August 2000, and a good bit of that time he spent complaining about Mark Weber and David Irving. Weber, as editor of the Journal of Historical Review, seemed to be constantly trying to soften the impact of Faurisson’s articles, which did not please Faurisson at all. He was annoyed with Irving for his lack of rigor, which unfortunately gave some validity to Deborah Lipstadt’s accusation that he was a falsifier of history. The faults that Faurisson noticed in these men eventually became much more evident. Within a decade, both had retreated to the point of endorsing the proposition that some Jews had been gassed. A couple of years ago when I wrote my articles criticizing the retreat from Revisionism by Weber and Irving, and also by David Cole, the time that my girlfriend and I had spent with Professor Faurisson on 5 August 2000 was constantly in the back of my mind.

The following video is a general introduction to Holocaust Revisionism. You might have some difficulty with the pronunciation here and there, but it is very worth the effort, if you want to have a good basic knowledge of the subject.

Anne Frank Hoax: Finally, an Admission
Thoughts on the "Holocaust"
Refusal to Acknowledge Uniqueness of Holocaust Constitutes a "Second Genocide" Against Jews
Ursula Haverbeck: Update on the Verdict
Auschwitz: Myths and Facts
The Urge for the East, Hitler, and the British Empire: Why the USSR Should Have Been Destroyed and C...
Shielding Evil
Sorry Mom; I Was Wrong About the Holocaust
Tags:Holocaust RevisionismRevisionismRobert Faurisson

Friedrich Hayek and the Jews (Part 3 of 3) 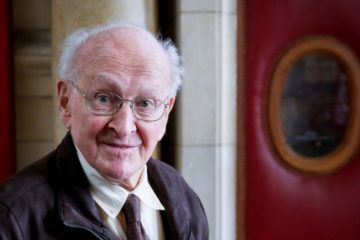 This man was a modern-day Voltaire.

A truly courageous man. I wish more Academics would grow a pair and tell the truth. But I am not holding my breath…..

RIP,PROFESSOR..AND MAY YOUR DRAMATIC UNEARTHING OF THE TRUTH BE CONTINUED..FROM MAURITANIA..WHERE THE STATE SOLD THE NET..AND THE SPEECH..TO ISRAEL..HELLO FROM HERE..WHERE..LIKE YOU..WE RECLAIM OUR COUNTRY FROM THE JEW..HELLO FROM HERE WHERE WE STAND UP TO THE ZIONISTS AND THEIR VASSALS

“In fact, he even taunted the government. There was a telephone hotline for reporting incidents of Holocaust Denial, and Faurisson would call in to report himself.”

Ha. That’s brilliant! I do so enjoy watching the kikes get hoisted by their own petard.