Pay Cash — and Live Without Fear

IF YOU PLAN on making a major purchase, then you should consider saving up your money first and paying cash, if this is at all possible. If you take a loan from a bank, you will end up paying much more.

Because you couldn’t hold your horses, because you had to have it now, you will have wasted $280,464. Imagine what you could do with that much money. Why, you could almost buy another house like the one you just finished paying for, except you can’t because you accepted a bank loan.

And, remember, $1612.40 per month is a lot of money to spend on one thing in a month. Most people won’t have much left after making a house payment that large. You still need to buy groceries and pay the utility bills.

And all the while, for that whole 30 years, the bankers will be watching you like a vulture watches an animal dying in the desert. If you falter in your payments, whether it’s your fault or not, they will pounce on you. The bankers will declare you to be in default on your loan payments. They will foreclose on your mortgage and evict you from your home. However much you’ve have paid — so long as you have anything yet to pay — won’t matter to them in the slightest.

If you think about it, you can figure out why most people are terrified of losing their jobs — so afraid of it, in fact, that they will sacrifice every scruple that moral people normally have. I’ve remarked in the past that a threat to the paycheck will make many people pretend to believe every lie they ever heard. The reason is simple: They’re in debt, and the capitalists control workers through the threat of unemployment.

Politically influential groups (such as the Zionists) control whole countries through this same fear. They make liars out of everyone who isn’t either exceptionally courageous or financially independent. Teachers will teach students lies because they fear to do otherwise. The police will enforce bad laws, even when they know that the laws are bad, because they fear losing their paychecks more than they love doing right. Politicians will enact unwise legislation, even when they know better, because of the pressure brought to bear on them by voters, who are in turn under pressure from their employers and from the bankers. It is a fear-driven system that goes nowhere good.

The Clinton Foundation Racket and Trump's Failure to Drain the Swamp 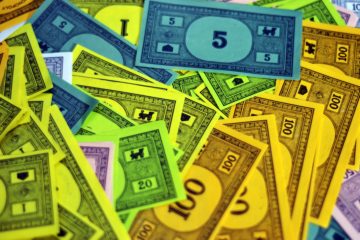 You are wrong about the math on this. Sure, what you write makes sense at first glance, but you are not calculating the rate of inflation and the ability for an investor to take that still very cheap money and earn far more by investing it. Take as much cheap money as they will give you. Always use the bank’s money for as long and as much as they let you. As a “dumb goyim” we are taught exactly to “save” our money for purchases, whereas the kosher genociders are taught from birth to use other people’s money. Money is to make money, not save. This is the system we live under, use it as our overlords do. If you can’t repay the debt, there are bankruptcy courts where shrewd… Read more »

You are exactly right. Many people still look at money as being valuable in itself, instead of being only the ever-changing symbol of concrete objects of value.

However, using bankruptcy court, or not paying a credit-card bill until they offer to let you off if you pay only one-fourth of what you owe—to me this is irresponsible and just pushes the debt off onto all of us in the form of higher prices, and higher interest rates. We end up financing the sluggards.

Léon Degrelle summed things up nicely with his observation: “In politics, manacles are imposed in the form of money.”

Pay Cash — and Live Without Fear