Australian Government: “It’s Not Okay to Be White”

Introduction by John I. Johnson

PAULINE Hanson’s ‘It’s Okay to Be White’ motion was defeated 31-28 in the Australian Senate.

In a video contained in the controlled media piece from news.com.au below, an Australian senator, born in New Zealand and apparently White, called the motion “obscene.” He is a crossover to politics from the media.

Next an Italian-Australian senator (from the Green Party) claims that being White — or at least “White Anglo” — is a passport to wealth and privilege, the equivalent of “winning the lotto.”

Note the emotion of these two anti-White men, which you do not often see among White racialists. They are emotionally engaged — hot, angry, contemptuous of those they hate. In sharp contrast, conscious Whites who are not anti-White are cold, emotionally unengaged.

A spokesman for Australia’s anti-White media below provides what he says is the history of the “sinister” “It’s Okay to be White” slogan.

The sinister origins of ‘It’s OK to be white’

THEY seem innocuous. But these five words have a sinister past, and now they have thrown the Government into chaos.

Those five seemingly innocuous words threw the Government into chaos after it supported Pauline Hanson’s motion in the Senate denouncing “anti-white racism” and “attacks on Western civilisation”.

This morning the Government backflipped, claiming an “administrative process failure” had led it to vote the wrong way on Ms Hanson’s motion by mistake.

But the reversal came too late to stem an avalanche of criticism, with the Coalition’s political opponents accusing it of endorsing “the words used by white supremacists and neo-Nazis”.

Explaining the Government’s mistake, Attorney-General Christian Porter blamed his own office, saying his staff interpreted Ms Hanson’s motion as “opposing racism” and “the associations of the language were not picked up”.

They can’t have looked very hard.

If you are wondering what the big deal is — it is, after all, perfectly OK to be white — you are missing one crucial thing. Context.

The phrase has a sinister history.

“It’s OK to be white” was first dreamt up on 4chan’s “politically incorrect” image board, which is a sort of gathering place for anonymous trolls.

It’s a diverse group, in its own weird and disturbing way — you will struggle to find a more comprehensive cross-section of the internet’s sewer dwellers anywhere.

There are white nationalists, men’s rights agitators, some of Donald Trump’s more demented fans, people who just really hate political correctness and some straight up racists and misogynists.

You are welcome to take a look at the forum yourself — thanks to the wonders of modern technology, it is just a simple Google search away — but expect to come across some pretty nasty stuff.

So, how exactly did the “It’s OK to be white” start?

It was spawned when an American university, Boston College, tore down a pair of provocative signs in October last year, saying they were “offensive”.

The posters bore an image of Uncle Sam, with the caption: “I want you to love who you are. Don’t apologise for being white.”

“An outside group, well known for such tactics, posted offensive materials to provoke controversy. We stand united in opposition to their actions and denounce all forms of hatred,” the college said at the time.

The 4chan trolls reacted by refining the sign’s message and distributing new posters at other universities across the country as a Halloween stunt. Here is the original post laying out their “game plan”.

It called for people to dress up in Halloween costumes (so they could stay anonymous) and plaster the signs on campuses, in the expectation the media would go “completely berserk”.

“Normies tune in to see what’s going on, see the posters saying ‘It’s OK to be white,’ and the media and leftists frothing at the mouth,” the plan read.

“Normies realise that lefties and journos hate white people, so they turn on them. Credibility of far left campuses and media gets nuked, massive victory for the right in the culture war, many more /ourguys/ spawned overnight.”

It didn’t happen quite so dramatically, but signs bearing the slogan did start to pop up at schools and universities in the US and Canada. For a while, that was pretty much the end of it.

Then, a month later, Lucian Wintrich, the White House correspondent for a right-wing, conspiracy theory peddling website called Gateway Pundit, tried to deliver a speech at the University of Connecticut entitled “It’s OK to be white”.

About 100 people attended the event, many who interrupted Mr Wintrich, booing and chanting “Go home Nazi!”

And there were ugly altercations. Mr Wintrich grabbed one of the protesters after she stole a piece of paper off his lectern, and students vandalised the venue. The police were brought in.

It’s really unfortunate that some of the kids at @UConn felt the need to be violent and disruptive during a speech that focused on how the leftist media is turning Americans against each other. Tonight proved my point.

“We live in a tense and angry time of deep political division. Our hope as educators is that creative leadership and intellectual energy can be an antidote to that sickness, especially on university campuses,” the university’s president said.

“Between the offensive remarks by the speaker, who also appeared to aggressively grab an audience member, and the reckless vandalism that followed, that was certainly not the case on our campus tonight.”

Australia was properly introduced to the “It’s OK to be white” slogan when Canadian alt-right activist Lauren Southern visited the country for a speaking tour in July.

Ms Southern donned a T-shirt bearing the catchphrase as she touched down in Brisbane.

“It’s a pleasure to land here and see Australia upholding its commitment to free speech and Western culture — something that may not be here for much longer if left-wing Australian politicians continue their pathological worship of multiculturalism,” she said.

So, there’s the background. “It’s OK to be white” is a well-known slogan concocted by an internet forum crawling with white supremacists, which has since been adopted by the trollier elements of the far-right.

“There is nothing innocent, nothing unknown, nothing hidden about this phrase. Frankly, the claim that somehow the Government didn’t understand it or didn’t know about it is not believable,” she said.

“We are supposed to believe that no one in the Government paid attention and some junior staffer ticked it off, and then Government senators just filed in and sat behind Senator Hanson oblivious to the fact that they were endorsing a racist motion designed to promote Nazis, the Klan and other white supremacist groups.”

Ms Hanson, for her part, has angrily denied any suggestions her motion was racist.

“If I had said it’s OK to be black, every single senator in the chamber would have voted for it,” the One Nation leader said today.

“As I stated on the floor of the Senate, I have always believed it is OK to be black, white or brindle.”

Source: John I. Johnson and news.com.au

Asian Immigration Outnumbers Europeans for the First Time in Australia
Muslim "Refugee," 20, Raped a 10-Year-Old Boy and Claimed "It Was Culturally Acceptable"
Orwell Alert: A Picture that Says a Thousand Words -- "Life in Soviet America"
Does Melbourne Represent Our Future?
Australian Senator on South Africa: "This Is the Start of a Genocide"
Austria: "Like It or Lump It" -- Invaders to Be Given €1-an-Hour Jobs Until They Learn to Speak Germ...
Pauline Hanson Wins Australian Senate Seat
White Refugees Not Welcome in Australia
Tags:AustraliaIt's Okay to be WhitePauline Hanson

Please Stop Clapping: The Idiocy of Police and Military Worship 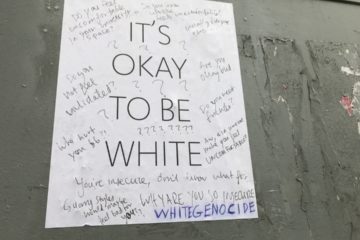 It’s Not Okay To Be White in Canada’s Universities

It is not even OK to be Italian!

About twenty years ago an Italian Sydney Soccer club was told by the head of the Soccer Federation (former head of Australian Broadcasting Commission) that it could no longer use Italian colours in its symbols because Italy, as EU member, no longer existed.

The Greens in Australia often state contradictory policies at the same instant: Open our borders and save our environment.

They want Australia to be dissolved into the Asia-Pacific region and also want Australia’s environment converted into money, both for the benefit of the usual international financiers.

Australian Government: “It’s Not Okay to Be White”