Are the Jews Playing a Deep Game with the Attacks on Kavanaugh?

THE VOTE to confirm Brett Kavanaugh should be held immediately. Women are being induced to lie, either for money, for ideology, or for notoriety. The Democrats would like to delay the confirmation vote until after the midterm elections.

I want everyone to consider something. If the Democrats managed to sink Kavanaugh’s nomination to the Supreme Court, and it afterwards turns out that all his accusers were lying, what will it do?

Well, it won’t bring back Kavanaugh as a candidate for the US Supreme Court. But it will call into question everyone else who has been accused of sexual misconduct by the “Me Too” movement.

And who are conspicuous among those who have been accused?

All of them Jews.

The Jews are playing a deep game with more than one goal in mind. By using “Me Too” women’s claims (false ones) against Kavanaugh, the claims will seem credible in the short term, and Kavanaugh will, the Democrats hope, not be confirmed to the Supreme Court. But in the long term, as these same claims are exposed as lies, the “Me Too” movement will lose credibility, enabling the restoration of Jewish men who really did do bad things to women.

Causing trouble in the confirmation process for Brett Kavanaugh, by (mostly) Jewish Democratic Senators, might indeed be the Democrats’ primary purpose. But a secondary one is reining in an organized feminist movement that escaped from their control and began interfering with Jewish political power.

The Greatest Demonstration of Strength

A Primer of Social Credit 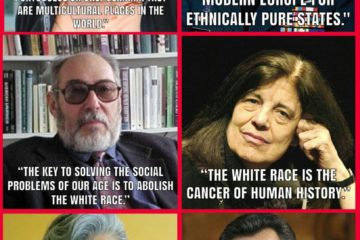 Juden Supremacism Is Declared The Law Of The Land

It’s possible this is one more act in the ongoing drama being stirred up by our kosher overlords, but the deeper implications might also be this: The polarization of America along the left-right political lines but with heavy racial undertones is making polarization grow deeper through the rhetoric being thrown around now. I believe it’s in order to inflame these two groups (one side being clearly identified as White heterosexual males, the other being everyone else also identified by sex and race) towards a shooting civil war. If nothing else, radicalizing White women against their own men will continue the trend of falling White birthrates. A shooting civil war would result in millions of dead Whites and benefit the Jews by eliminating their only competition for dominance on this planet.… Read more »

“Exposing the part Jews play, as the present article does, is a worthy effort to assist in our survival.” Yes. And here at NA/NV, we need to start talking about 9/11 while it is still fresh on peoples minds in spite of 17 years. Evidence is getting clearer and clearer that it was an inside/outside job. The Israeli Mossad’s involvement (among the ‘Outsiders”), and the Sayanim Jews and their ‘Shabbos Goy’ (among the “Insiders” in America). For example, Former Israeli prime minister Ehud Barack’s Appearance on BBC world News within HOURS!!! IF Not Less from the start of the WTC incident. Essentially, ‘Echoing’ what the PNAC (Project for a New American Century) ‘Manifesto’ stated in 2000. Bin Laden was cited as the perpetrator of 9/11 (an agent of the CIA-Mossad… Read more »

Are the Jews Playing a Deep Game with the Attacks on Kavanaugh?