On the Kavanaugh Farce — or, The White Man’s Head in a Noose

Head in the Noose

I’ve been away for a while because I don’t really know how much good it does to keep doing this. The hour is late, the awakening is falling flat and there are snakes and deceivers all around. Even I often do not know who to trust in this age of misinformation and propaganda. And, it is becoming dangerous to put one’s self out on a limb.

Nonetheless, here goes. Let’s analyze the shit storm currently swirling through America and look at the larger implications of what it all means.

As the Kavanaugh Supreme Court circus continues, I often ponder what brought us here as a nation and why it seems forces are arrayed around and closing in on whites – and especially white men.

The steady drumbeat to open violence continues as hatred of whites grows bolder and is now unabashedly displayed. A global minority, whites are a scant 7% of the world’s population. Whites are being displaced from the nation they founded – and even the continent where they evolved – to roaring cheers from a bloodthirsty, leftist mob. It seems the mob is out to destroy them with a genocide occurring out in the open, yet no one dare speak its name because whites have been trained that their own self-interest is now verboten.

Precedents are being set in far off places to kick whites off their land. Already happening in South Africa, how long before this sentiment comes to America?

Make no mistake about it, the Kavanaugh nomination fight is about making conservative, straight, white men pariahs in their own land much more than it is about keeping a moderate judge off the Supreme Court. It is meant to legally castrate white men, to render them impotent. (Before they’re perhaps literally castrated someday to cleanse them of their “toxic masculinity” we hear so much about.)

Once a cultural and legal precedent involving an appointment to the highest court in the land is set and women are given carte blanche to destroy a man with baseless claims, with no evidence other than a woman’s word that a man got a little rough with her 35 years ago (but didn’t actually have sex with her), it will be off to the races to have men removed from any position in business, industry, or government at any time based on nothing more than a woman’s whim.

#MeToo was only getting the party started. This is how leftists plan to eviscerate white men – by using their own women against them.

When sloganeers tell us the future is female, they’re hinting at a future world in which emotion and not rationality rule the day. The law books currently written will be basically worthless in a court room based on emotion. The world of reason men designed will be replaced by a female world of unreason. Look around: One thousand years of cultural evolution already been bascially destroyed in only a few short years. From the Magna Carta to the Bill of Rights, long-respected and hard won Western jurisprudence is being phased out.

With leftist hate mobs conducting an open witch trial of not only a President but his Supreme Court nominee in the court of public opinion and the mainstream media fanning the flames, whites who support these “relics” of the past are openly mocked and shamed in an American media that claims to oppose racism. Trump is called a Nazi. Kavanaugh a gang rapist. Mass hysteria is gripping the land – and is only the beginning of a new Dark Age for the West.

Racial Bolshevism has set a grotesque narrative: The Utopia leftists seek cannot be realized until the last white man is chased down and killed.

Whites find themselves in a carefully laid trap. It’s been half a century if not more in the making. Call it a slow-bake genocide with the oven timer rapidly ticking towards zero. Let’s examine but a few puzzle pieces starting back in the 1960s when the seeds of today’s revolutionary harvest were laid.

Social engineers or “human hackers” as they should be called knew what they were doing when they first proceeded to drive a wedge between man and woman with feminism. How to break up the family and turn woman against man? Set the rules in opposition to what millenia of biomechanics have taught us. Scapegoat men as oppressors and villains and ramp up the emotional hysteria to a frenzy.

White men have been driven out of their families and forced into living increasingly solitary lives. The marriage rate has reached an all-time low with the millennial generation. Birth rates are demographically suicidal.

Western governments operating at the behest of their corporate paymasters successfully relegated white men from “indisposable” to “disposable” status with a deft sleight of hand. Dads now beg to see their children and get enslaved by state child support systems on a woman’s whim. They didn’t stop after men were thrown out of the human family and assigned sperm donor status.

They called the new rules “female empowerment” but there’s no honor among the thieves and robber barons who would do this to a nation and a people. Feminism was supposed to get white women out of the kitchen. But, make your way into any corporate fast food joint, family feedbag, or other restaurant and you’ll find white women still in the kitchen. Only, they’re now making slave wages cooking for strangers rather than cooking for a family. And totally clueless to how they’ve been manipulated and used by social engineers. Women are unhappier than they’ve ever been.

If they’re not in a kitchen they’re toiling in meaningless corporate jobs, the basic building block of civilization – the family – crushed.

It gets worse. White men are now being openly persecuted for having functioning libidos, as we are seeing with the Stalinist-style show trial now being conducted in the U.S. Senate. White men are now openly mocked and lampooned in the media. Even the Emmy Awards were nothing but a massive middle finger to white men this year.

Worse, women have absolutely no loyalty to their tribe or their country. As one astute blogger put it, “They already hold an enormous amount of power over men through sexual selection, social selection, and social approval.” Giving them power over government is the surest way for men to be turned into slaves. Something the American government has already been successful in achieving.

Women will not associate with men lower than them in status. But reducing white men to slave status isn’t enough. Now they’re coming for your dignity, and eventually, your life. Such is the price of getting weak in a world in which rivers of blood have been spilled throughout history so a select few men can become momentary masters of a fraction of a dot.

There is an irony in all this social upheaval and nightmarish imagery, though. Women and non-whites think they’re advancing their interests by destroying white men. That’s simply not the case. The sad reality is they’re only useful idiots of a global elite bent on gaining control over the totality of this planet at any cost.

Play with Communism and Racial Bolshevism, and get burned, stupid leftists.

If women and minorities thought they had it bad under white men, they have no idea what’s coming when the sadistic people who planned a covert genocide have absolute power over the entire planet. It’s usually at this point, after the puppet masters have taken what they want when a shocking realization hits the useful idiots of such a Communist revolution like a thunderbolt at midnight.

At that point, leftists will turn against those who took advantage of them. In this case, the Democrat-Socialist Party who are experts at using demagoguery to gain power. But, by then it will be too late. Their submissive status on the new global, electronic plantation will already have been cemented. What was done to white men, to bring them to heel, to shame, debauch, disinherit, subjugate and castrate them, will be done to all men – black, brown, and yellow. Women will be okay as long as they toe the line.

Leftists have no idea what kind of sociopaths they’re doing the bidding of. They may destroy whitey, bit in their bloodlust for power they will also destroy themselves.

P.S. I’ve long thought that if the human species doesn’t go extinct, life is soon about to become so miserable for anyone it won’t be worth living. To think, white men will have gone from walking on other worlds to extinction in less than a century. This is a not a nice planet. Get soft and weak at your own peril. Not only will other tribes burn you, but your own women will light the bonfire.

Killing the White Man in Us

Dinesh D'Souza is a Worthless Fraud, part 2: Hit Him Where it Hurts

Excellent! I wonder if you don’t mind that I reproduce it in my website?

I cross-posted an edited version of this article from Relampago Furioso’s website The New Modern Man.

I posted it without any getting any permission from the author himself (since it’s free promotion for him, a compliment and a shout-out, and I can’t imagine why any writer would have a problem with that).

I hope the author would be proud and flattered by the post. If he isn’t and he complains, however, I would sadly and reluctantly delete it.

So very true it all is. I find it quite disheartening seeing all this happening but more especially to see that our own white men seem not to care and will even play the role of your enemy to defend this madness. Is there hope when your own turn on you with relish and mindless zombie like behavior?

Instead of staying home with their own children women work for low wages in day care centers with cameras on them. Instead of tender care of their own elderly, they care for 12 strangers in a nursing home.

White men are degraded every day in this country. Treated terrible and made to feel guilty. So why do they crawl in silence? No spirit.

The biker says to the enemy — f**k off — tell your story walking.

William ‘Bloody Bill’ Anderson: “No one provokes me with impunity.” 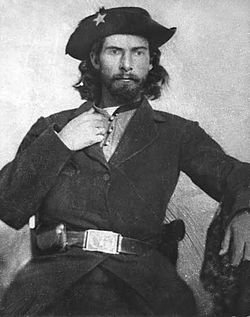 CC-
Who will put the “spirit” back in the White man if you don’t want them to crawl in silence? Would you agree we need everyone on board in conducting outreach activities?

There are Timeservers in every generation. Those people will not come on board.

I know what a race war is. We illustrated great courage, but didn’t have the numbers to repulse the Federals. It was more fun to watch us on television than to come on down.

So far as outreach activities — racism is not rocket science.

On the Kavanaugh Farce — or, The White Man’s Head in a Noose