Who wrote the Deguello Report?

THE KIND OF ANONYMOUS mass-smear represented by Harold Covington’s A Brief History of the White Nationalist Movement (2007) is not a new phenomenon in the racialist milieu. In 1976, in the days before e-mail spam, some anonymous source mass-mailed a booklet (of about 15,900 words) called the Deguello Report. It purported to be the product of research by some former members of intelligence agencies of various Western nations hoping to set straight patriots in the United States. (The Spanish name was probably chosen partially to reflect the fact that a number of Spanish-speaking countries at the time had anti-Communist dictatorships.)

Parts of the Deguello Report were very well written. It begins with a discussion of Communism, which Deguello (catering to assumptions prevalent in the 1970s) presents as the main conspiracy. This overall conspiracy is said to contain the subdivisions: Socialism, Judaism, and Homosexualism. Deguello goes on to explain that the patriotic cause in the USA has been infiltrated with members of these three sub-conspiracies of Communism, and the bulk of the report is occupied with telling us who these worms are.

Some of the information in Deguello was true.* For example, what it said about right-wing Christian leader Billy James Hargis seems to have been true: he was accused of sodomizing young men and women at American Christian College, of which he was president, by four male and one female student; the fact was reported in Time magazine (AP, 22 February 1976).

This was probably why the report was attributed to foreign intelligence agents, to explain how the authors would have information that nobody else could find out — as if the intelligence services of Spain or Chile would have found it worthwhile to investigate the sexual habits of political nonentities in the United States.

It has been suggested, credibly I think, that the Deguello Report was probably issued by somebody in the racialist milieu who wanted to destroy his competitors through defamation. In that case, one ought to ask, who is conspicuously not defamed?

Oddly enough, one group that gets only slight criticism from Deguello, which is more than offset by high praise, is Frank Collin’s Chicago-based “National Socialist Party of America.” One might think that being a “Hollywood Nazi” group would in itself make the NSPA a target of suspicion and criticism, but no. Deguello says: “Although somewhat confused ideologically, members of this group are generally high caliber individuals.”

Somehow the compilers of the Deguello Report failed to mention the allegation, reported by UPI as early as April 1970, that Frank Collin’s father was a Jew born with the name Max Simon Cohn.

What a telling omission! Any well informed racialist probably would have heard about that by 1976, yet it is not mentioned.

Given that Frank Collin’s paternal ancestry was public knowledge, the most obvious explanation for this omission, in a report that calls people Jewish or homosexual infiltrators right and left, was that the compiler was somebody associated with Frank Collin, or Collin himself. That would be a reason not to mention that Frank Collin’s father was a Jew.

One might also think that some alleged intelligence officers that overshot the mark by falsely accusing William Pierce (at that time relatively obscure) of being a closet homosexual should at least have picked up some scuttlebutt about Frank Collin’s sexual habits, which got him a seven-year prison sentence after his arrest in late 1979. There’s no hint of that either.

It was in 1976 that Harold Covington joined Collin’s NSPA after being deported from Rhodesia. Covington became Frank Collin’s right-hand man. In Covington’s “The Frank Collin Affair,” and in the largely identical section about Frank Collin in his Brief History, Covington likewise omits to mention any allegation of his erstwhile fuehrer’s Jewish ancestry, even though the entire world knew.

The best guess is that the Deguello Report was promulgated by Frank Collin’s “National Socialist Party of America” with Harold Covington’s participation, or maybe Covington did it all by himself. In either case, the fact that Deguello appeared contemporaneous with Covington’s joining the NSPA suggests that he was the instigator of it — because we know, in retrospect, that Harold Covington did this kind of thing.

The word degüello comes from a Spanish verb that means to cut the throat. It designates a bugle-call indicating that no quarter is to be given to the enemy. The implication of using that name for a polemic against the USA’s White racial leaders seems to be that the persons discussed should be killed. Just a few years later, in  a letter dated 30 October 1980, Covington indicated that a “blood purge” of White racist leaders would be desirable.

The Deguello Report in retrospect also foreshadows, in its general conception and purpose, A Brief History of the White Nationalist Movement, a similarly wide-ranging smear of White racist leaders that, although formally anonymous, was obviously written by Covington because its content consisted of material long associated with him (and like the Deguello Report, it praises its author). When the Deguello Report appeared, it was evident that the author was somebody associated with Frank Collin, but it was impossible to narrow it down to Covington because he was an obscure person with no reputation. Four decades later, when Harold Covington’s activities of this kind are well known, the most obvious and likely explanation for the Deguello Report is that Covington wrote it.

* Beginning a presentation with information that will be readily accepted as true is a way to evoke credulity so that ensuing lies will be accepted. This trick of dishonest rhetoric has been known since ancient times. 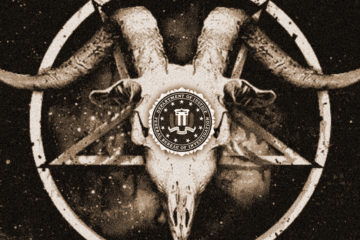 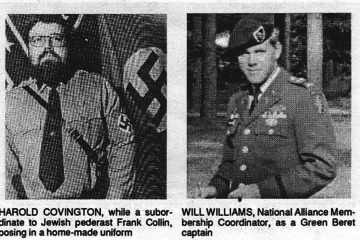 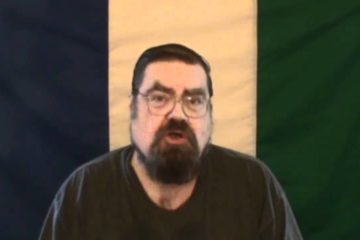 Death of a Con Man