THE New York Times of 25 March 1906 reported a fundraising effort that invoked the figure of “6,000,000 Jews” who faced “systematic and murderous extermination.”

Interesting points in this article:

1. Jews were perceived in 1906 to be attempting to replace the Czar’s government with “a Jewish empire.” It was the opinion of observers in the years following the Bolshevik takeover of 1917, such as Times of London correspondent Robert Wilton, Captain Montgomery Schuyler of the American Expeditionary Forces in Siberia, and the Right Honorable Winston Churchill, that essentially what had happened was the seizure of the Russian Empire by a faction of Jews.

2. Jews were accusing the Czar’s government of a plan to kill all (six million!) Jews in the Russian Empire.

3. Jews were cooperating worldwide, explicitly and overtly in the realm of finance, to create difficulties for the Czar’s government — but one can infer that the Jews were ready to use any weapon available, since they were accusing the Czar of intending mass murder. Accusations of murderous intent are the standard preamble to horrific violence against the accused, as for example in the Book of Esther, and in World War II and the invasion of Iraq.

4. Dr. Nathan’s “appeal to the Jewish money powers of the world to arrest Russia’s career as a borrower” shows that already in 1906 Jews controlled international finance and used that control for their own purposes. 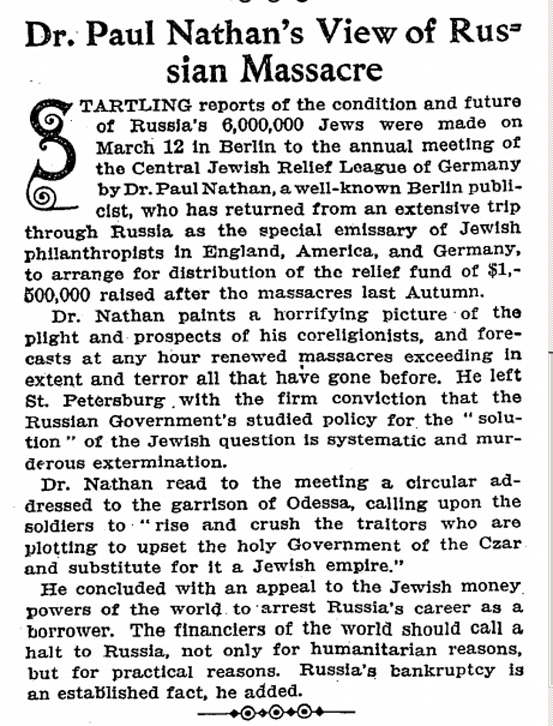 Other Jewish fables of a similar nature:

Italy to Invaders: "Get Ready to Pack Your Bags"

Are all those (repeated) jewish delusions about 6,000,000 jews being repeatedly killed throughout recent history just a loud jewish plea to all the “gentiles” to genocide/castrate all the jews once and for all ?

Perhaps surprising that those videos above are not yet marked as “inappropriate or offensive to some audiences”… such as the following video (part 1) about Mr. Hitler’s Mein Kampf…

Looking at these two children of the Czar and then looking at the typical, ugly, rat-faced Khazar, one can understand why the kike is a hate filled bastard.

I think that’s how it all started, probably more than 2000 years ago. Some Middle Eastern trader spied his first blonde girl somewhere in southern Gaul or Scythia and eternal envy and hatred ensued.

…just as if they want you to know, it is a lie. It must be a lie verified by religious belief to have abstruse debt —– no definition , no end, ex nililo nihil fit. And then the sinner will exaggerate it with a personal testimony of grief and indebtedness . It preempts all traditional religions and can be enforced with congressional unanimous approval. Naturally , this Schuld or sin can not be “atoned” with sanctimonious confession alone but real, hard, currency ; at least as real as is available after the plaintiffs have devalued all the money. Will the poor , long suffering, persecuted jew ever be paid what is really owed them? Keep in mind Olga ,Tatiana , Marina , Anastasia , Alexi , and Jimmy, their little… Read more »