When spring lightly touches,
With hand green and golden,
The mountains and fjords,
Then shouts the sea rover,
“A-viking! A-viking!”

The hammers are busy,
On weapon and harness.
Then flashes the broad blade,
In every sea hamlet.
The dragon ships, thirsty,
For bounding blue water,
Leap down to the seashore.

And Olaf of Norway,
And Erik of Gotland,
And Thorwald the Mighty,
Whose grandsire was Wotan,
Stand fast on the poop deck,
With golden hair streaming,
With spear brightly glinting,
With eye fierce and blazing,
Sail out on the swan’s bath –
The grey widow-maker –
For England or Iceland,
Byzantium, Vinland,
Far land or ancient,
And ripe for the plunder,
The burning of roof-trees,
The seizing of women,
The looting of treasure,
The flowing of red blood,
And wine for the victors.

Ah, whence fled those great days,
The days of our fathers,
The days of the valiant,
Of gods and of heroes,
Of fair maids and foul dwarfs,
And lindworms and dragons,
Of Beowulf, Dietrich,
Strong Harald, grim Hagen,
Wolfhart and Siegfried,
The greathearts the mighty?

The loathsome today is
The seed of their strong loins –
The petty, the small,
The clod and the crawler.

The music has gone from the souls of our people,
The thunder has vanished away with Valhalla,
Now meekness and weakness,
And womanly virtues,
Have shackled, degraded,
And shamefully softened
The sons of our fathers,
The sons of the mighty.

And now we have traded,
The lightning of storm gods,
The arms of the Valkyries,
The halls of Valhalla,
The kiss of wish-maidens,
For wings and a nightshirt,
A harp and a halo,
A psalm book and psalter?
Oh, no, my Lord Bishop.

Dr. Peter H. Peel was born in England in 1920. His active involvement in the cause of European renewal began in the 1930s, when, as a teenager, he briefly served in the forces of Francisco Franco during the Spanish Civil War. Returning to Britain, he joined Sir Oswald Mosley’s British Union of Fascists.

A patriotic Briton, he joined the Royal Air Force in the Second World War, and served in India and Burma. He later regretted having fought against Hitler’s Germany.

After the Second World War he immigrated to the US, where he earned his doctorate in history. He also pursued a part-time career on the stage and in Hollywood. He appeared in television shows such as The Twilight Zone and Stagecoach, and films such as Sextette.

Politically, he supported the National Socialist White People’s Party and later the New Order, as well as the National Alliance in the US, and the National Front and the British National Party in the UK. He was also a leading member of the Los Angeles Odinist Council.

We have previously published his prose poem CREDO; you may read it here:

Don’t Be An Indoorsman
A Yankee Poet in Greenwich Village
Download: Wilmot Robertson's Dispossessed Majority
How Nuth Would Have Practised His Art Upon the Gnoles
To Revilo Oliver
The Watch-Tower
The Anti-White Anglo-Saxons
Voltaire and the One-Liner
Tags:LiteraturePoetryViking AgeVikings 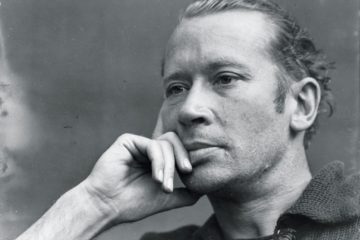 Am I the only person who has trouble with a poem glorifying those people who sold others of our people into Moslem slavery, among other things?

I would take the old Christian knight over a Viking, not only in combat but in ethics, any day.

ALL the Saxons that Charlemagne killed are now enjoying eternal life in heaven. They are probably still thanking Charlemagne. :-)

Seriously, I hope that Whites are progressing along the lines that you have so wisely mentioned.

From Hitler and the National Socialists I think we can also leave behind the glorification of war. The view of war expressed in Mein Kampf was out of date at the time that it was written, and it is far more so now, when our race is the least numerous of any on earth, and when our birthrate is frighteningly low.

Agree completely. Actually, the “best of the best” that has been related here sounds to me like “the best of ” Medieval European Christianity.

With all its faults and all its corrupt leaders.

You are completely delusional if you think that there is any way that our race will survive without fighting and bloodshed at some point in the future.

Race war is the normal condition of mankind. The problem at the present is that one race – ours – is not fighting back. Far from “out of date,” Hitler’s attitude is prescient and visionary.

As Yockey notes, by 1914 the White race controlled 19/20ths of the Earth’s surface. This was accomplished only because our race is in its essence a warrior race. Warfare and the warrior are to be extolled. Pacifism is weakness, defeatism, suicide and treason.

One can be a warrior without shedding a single drop of blood.

The problem with extolling war is that it produces scenarios like “the Spanish-American War”–a miserable, shameful and pathetic episode in American history.

Clovis was the first prominent king to slaughter pagans in the name of the Jew god. When the — 0nward Christian soldiers ran out of pagans to kill — they turned on themselves in a genocidal bloodbath.

Aethelfurth, King of Northumbria, noted in his wars against the Christians of England, “those who invoke their God against me make war upon me even if they bear no arms.”

Actually there was no ‘Clovis’. The word ‘Clovis’ is an ancient misreading of the handwriting of a scribe who wrote ‘Chlodvig’ in rather shaky script.

Clovis is Chlodvig is now Ludwig.

What’s the point of White people with a common culture to rise up and fight to recover their liberties and maintain separation when White people outside their region offer no help. That’s exactly what happened to the South in the 1960s. It’s more fun to pile up in the easy chair and watch those mean ol’ southerners on TV.

Teenagers fought a race war at my high school in the Fall of 1968 that would cause public schools outside Dixie Land to shudder, even recoil. The non-Whites were well nigh annihilated.

I would like to notify the good people of any section of this country that rise up to repulse despotism — expect more criticism than help.