Muslims and Jews: Allies at the Very Beginning 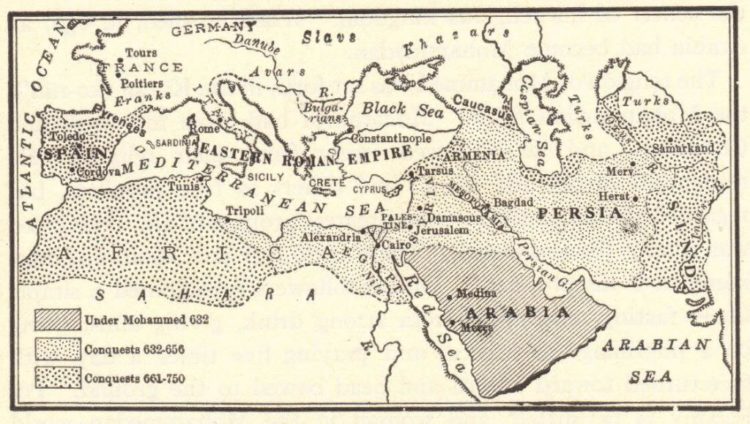 THE SUPPORT OF THE Jews in the Middle East was vital for the propagation and spread of the word of Muhammad. Although the material for the early Islamic history is complicated, an unmistakable and striking theme can be consistently teased from the literature of this period — whether Arabic, Armenian, Syriac, Greek or Hebrew — as well as from the archaeological evidence: Muhammad and his followers went to great lengths to assuage the fears of Jews and Christians as Muslim control expanded.

When Muhammad was cornered in Yathrib in southern Arabia in the 620s, soliciting the help of the Jews had been one of his key strategies. This was a town — and a region — that was steeped in Judaism and Jewish history. Barely a  century earlier, one fanatical Jewish ruler of Himyar had overseen the systematic persecution of the Christian minority, which crystallised a broad pattern of alliances that still held firm: Persia had come in to support the Himyarites against the alliance of Rome and Ethiopia. Muhammad was eager to conciliate with the Jews of southern Arabia — starting with the elders of Yathrib.

Leading Jews in the town, later renamed Medina, pledged their support to Muhammad in return for guarantees of mutual defence. These were laid out in a formal document that stated that their own faith and their possessions would be respected now and in the future by Muslims. It also set out a mutual understanding between Judaism and Islam: followers of both religions pledged to defend each other in the event that either was attacked by any third party; no harm would come to Jews, and no help would be given to their enemies. Muslims and Jews would cooperate with one another, extending ‘sincere advice and counsel’. It helped then that Muhammad’s revelations seemed not only conciliatory but familiar: there was much in common with the Old Testament, for example, not least the veneration for the prophets and for Abraham in particular, and there was obvious common ground for those who repudiated Jesus’ status as the Messiah. It was not just that Islam was not a threat to Judaism; there were elements that seemed to go hand in glove with it.

Word soon began to spread among Jewish communities that Muhammad and his followers were allies. An extraordinary text written in North Africa in the late 630s records how news of the Arab advances was being welcomed by Jews in Palestine because it meant a loosening of the European grip on power in the region. There was heated speculation that what was going on might be a fulfillment of ancient prophecies: ‘they were saying that the prophet had appeared, coming with the Saracens, and that he was proclaiming the advent of the anointed one, the Christ that was to come’. This, some Jews concluded, was the coming of the Messiah. Not all were persuaded, however. As one learned rabbi put it, Muhammad was a false prophet, ‘for the prophets do not come armed with a sword’.

The fact that there are other texts that say that the Arabs were welcomed by Jews as liberators from Roman rule provides important corroborating evidence about positive local reactions to the rising profile of Islam. One text about this period written a century later reports how an angel came to Rabbi Shim’on b. Yohai after he became disturbed by the suffering inflicted in the wake of Heraclius’ recovery of Jerusalem and the forced baptism and persecution of the Jews that followed. ‘How do we know [the Muslims] are our salvation,’ he purportedly asked. ‘Do not be afraid,’ the angel reassured him, for God is ‘bringing about the kingdom of [the Arabs] only for the purpose of delivering you from that wicked [Rome]. In accordance with His will, He shall raise up over them a prophet. And he will conquer the land for them, and they shall come and restore it with grandeur.’ Muhammad was seen as the means of fulfilling Jewish messianic hopes. These were lands that belonged to the descendants of Abraham — which meant solidarity between Arab and Jew.

There were other, tactical reasons to cooperate with the advancing armies. At Hebron, for instance, Jews offered to cut a deal with the Arab commanders: ‘grant us security so that we would have a similar status among you’, and allow us ‘the right to build a synagogue in front of the entrance to the cave of Machpelah’ where Abraham was buried; in return, Jewish leaders stated, ‘we will show you where to make a gateway’ in order to get past the city’s formidable defences.

Support from the local population was a crucial factor in the successes of the Arabs in Palestine and Syria in the early 630s, as we have seen. Recent research on the Greek, Syriac and Arabic sources has shown that, in the earliest accounts, the arrival of the attacking armies was welcomed by the Jews. This was not surprising: if we peel back the colourful later additions and venomous interpretation (such as claims that the Muslims were guilty of ‘satanic hypocrisy’), we read that the military commander who led the army to Jerusalem entered the Holy City in the humble dress of a pilgrim, keen to worship alongside those whose religious views were apparently seen as being if not compatible, then at least not entirely dissimilar.

More About the Jews
DNA Reveals the Legacy of Jewing
Sharing the Affliction
University of California: Jews Want to Ban Free Speech
Some "Rebels" Really Aren't
Israeli Research: Jews a Race, Not a Religion
Beyond Left and Right
Jews Experiment on Children, Yet Fabricate "Nazi Atrocities"
Tags:Jewish HistoryJewsMuhammedMuslims

Time to Water the Tree of Liberty

Wagner for the Workers

I don’t have the quote in front of me, but Mr. Hitler said had there been no Christianity there would be no Islam. The latter came about as a defensive religion.

Both Semitic outfits were spread with fire and sword.

judeo-christian is an oxymoron …… judeo-ISLAMIC would be accurate Jews and Arabs are Semites. The old expression ‘scratch a jew and you get an arab’ is true SUNNIsemite, JEWISHsemite, SHIITTEsemite, they are kissing cousins. Sharia law is copied from Halacha law. Halal is copied from Kosher in slaughtering of animals in kosher and halal, Though the slaughtering is the same, Jews, who follow kosher, do not pronounce the name of God on each animal they slaughter. http://www.differencebetween.net/miscellaneous/difference-between-kosher-and-halal/#ixzz4QIwe7Mx2 “As for Christianity, there is a dispute among Halachic authorities, but the vast majority consider it idolatry as well. Islam, on the other hand, is not considered idolatry.” Read that last bit again, slowly, so the christianzionists can keep up: “Islam, on the other hand, is not considered idolatry.” Islam is Judaism for… Read more »

One opened the gates of Toledo for the other and they both locked out the dumb goyim when they went to church. 700 years later Spain threw all of them out.

History is due for a repetition.

Muslims and Jews: Allies at the Very Beginning