Vitamin D deficiency harms Whites far more — and high doses are far less dangerous to us — compared to other races. Tell me again that race is a “social construct.”

HIGH VITAMIN D levels that exceed recommended ranges — an increasingly common trend in the population — show no association with all-cause mortality, while the better-known risks of vitamin D deficiency appear notably stronger in Whites than any other race or ethnicity, according to new research.

“Given the rapid increase in the incidence of serum 25-hydroxyvitamin D (25 [OH]D) values greater than 50 ng/mL in the population, our finding is reassuring that all-cause mortality was not increased in this group,” say Daniel V. Dudenkov, MD, of the Mayo Clinic, in Rochester, Minnesota, and colleagues, in their study, published online May 2 in Mayo Clinic Proceedings.

The finding of racial differences in mortality risk with vitamin D deficiencies is new, they add.

Concerns of J-Shaped Association With Mortality and Vitamin D Allayed?

Whereas the potential health risks of low 25(OH)D levels, including greater cardiovascular disease, cancer, and respiratory deaths, have been well documented, concerns about health effects at the opposite end of the spectrum — high vitamin D levels — have been raised more recently, including in a study that described a “reverse J-shaped” association of all-cause and cardiovascular disease mortality with 25(OH)D values greater than 50 to 60 ng/mL (J Clin Endocrinol Metab. 2012;97:2644-2652).

Strong Association of Mortality With Low Vitamin D, but Only in Whites

In this latest study, Dudenkov and colleagues evaluated data on individuals from Olmsted County, Minnesota, enrolled in the Rochester Epidemiology Project between 2005 and 2011 and followed until their last visit or death.

Researchers found no increased risk of all-cause mortality among patients with 25(OH)D above the “high” level of 50 ng/mL, compared with recommended levels of between 20 and 50 ng/mL.

After adjustment in a multivariate analysis, a significant interaction was seen between the effect of 25(OH)D and race/ethnicity on mortality (P < .001).

“We found a strong association between 25(OH)D concentrations of less than 20 ng/mL and all-cause mortality,” the authors say, noting however a “significant interaction by race/ethnicity, with no association for patients of other race/ethnicity, even at very low 25(OH)D values (< 12 ng/mL).”

Whereas vitamin D deficiency can result from a variety of causes, ranging from dietary to physiological effects of disease, high 25(OH)D values above 50 ng/mL are typically the result of supplementation, either in osteoporosis treatment or because the patient is at risk for vitamin D deficiency, the authors explain.

Although low levels may not have a causative effect on increasing mortality, vitamin D can be important in helping to prevent mortality from various illnesses, they add.

“The effects of vitamin D and its metabolites on inflammation, cellular proliferation, genetic regulation, calcium homeostasis, and immune modulation could have a salutary effect in a variety of diseases that contribute to mortality.”

And individuals who are not white are known to have lower 25(OH)D concentrations in general.

However, an effect known as the “vitamin D paradox” has shown that African Americans in fact tend to have a lower risk of osteoporosis despite having lower 25(OH)D levels, the authors go on to explain.

Blacks have been shown to be at lower risk of other effects of low vitamin D, they add.

“Typically, doctors are aware that blacks are more at risk of vitamin D deficiency than their white patients, so it’s also likely that those patients were being treated for vitamin D deficiency,” he added. “That may have therefore skewed the numbers and made things more difficult to interpret.”

Nevertheless, he concluded that, considering the research to date overall, the study “confirms that you can definitely have higher levels of vitamin D in the range recommended by the Endocrine Society Practice Guidelines, which recommend a preferred range of 40 to 60 ng/mL, and even suggest that levels up to 100 ng/mL are perfectly safe.”

Based on work in Mayo Clinic Proceedings. Published online May 2, 2018. Abstract

Composite Greeks: the Ancient and the Modern
Basics
Revilo Oliver on the John Birch Society
Are We The Kurds Of The Future?
Contrasts
Jew Identity: Non-White, Anti-White
When the Whites are Gone
Generation Zyklon Showing Resistance to Jewish Propaganda
Tags:HealthRaceRacial differencesVitamin D

Wagner for the Workers

Jez Turner -- Our Champion Steps into the Arena!

Stay Healthy Amid the Chaos! 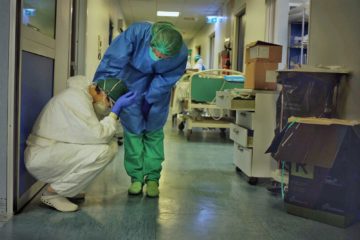 For years, I’ve been told that there is a staff that is tasked with removing unfavorable references to Jewish interests (and worse) from Wikipedia — often virtually immediately. Like many good things, such as genetic testing and reporting, that are essentially good concepts but should not be allowed to be owned, operated, tampered-with, etc., by those whose interests are contrary to our interests. We need to put a stop to this sort of thing once and for all, with a tip of the hat to Jez Turner.

Never use Wikipedia as a reference for anything related to science, health, politics or history. For pop culture references it’s fine, but nothing else. The internet is FULL of information sources. Using Wikipedia has become a reflexive and lazy habit of 99% of the population, and they’re being brainwashed for it, just like using Google instead of other search engines. Just a few (of many) other examples of the health differences between the races and consequences of miscegenation: 1. Researchers from Ohio State University discovered that they could identify the race of a person with 90% accuracy just by examining a culture of the probiotics from an inner cheek swab. The races carry different probiotic strains in their mouths. 2. Cross-racial blood transfusions and organ transplants were halted decades ago… Read more »

Wait, is this saying blacks and whites are different? Who would have known?

Sunlight’s a good source of Vitamin D, both through the skin and the eyes. I avoid sunscreen like the plague as it’s usually loaded with jew chemical carcinogens.

They’ve been lying about racial differences for years.I recall back in the seventies how some tv show like “all in the family” we’re promoting the fallacy that blood and organs were interchangeable between races and making people who knew better seem like narrow minded primitives.And,of course,into the present they’ve denied and covered up racial differences in susceptibility to certain diseases,like AIDS,knowing full well the risks to white women in cavorting with blacks.