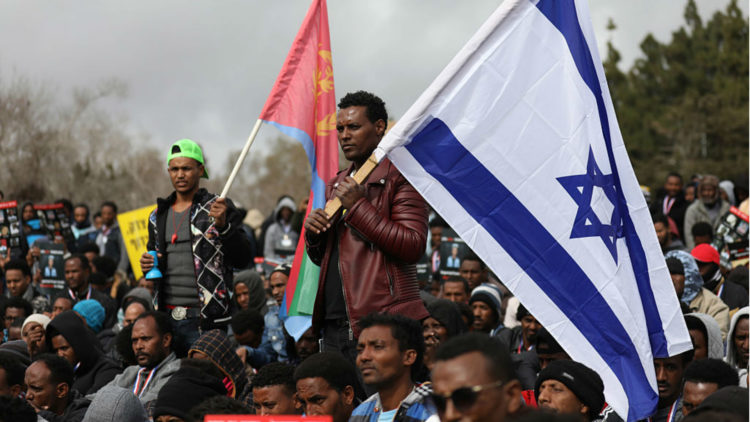 DO YOU REMEMBER the 2017 Israeli decision to round up all the Blacks in that country and deport them? At first, the Blacks were going to be deported to Uganda, regardless of which country they’d come from. Later, the Jews had a different idea; instead of deporting the Black immigrants to Africa, they’d dump them on White countries: America and Europe.

Then Benjamin Netanyahu changed his mind. For now, anyway. The plan to deport all the Blacks from Israel to — somewhere else — is on hold. Not for any humanitarian reason, of course. Someone in the Likud party, of which Netanyahu is chairman, pointed out that rewarding African Blacks with free passage into White countries would encourage more Blacks to attempt to come to Israel, in the hope of being shipped thereafter into a White country where they can get free everything at the expense of White taxpayers.

While the Jews do want to saturate White countries with non-Whites, they prefer that Israel not be a part of the pipeline.

By the way, it might be of interest that Benjamin Netanyahu referred to Blacks in Israel as “infiltrators.” Not migrants. Not immigrants. But infiltrators.

Update: My most recent information indicates that the latest Israeli plan is similar to the original plan: Round up all the Blacks in Israel and pack them off to Rwanda, regardless of which African country each of the Blacks calls home. Rwanda withdrew from a previous agreement with Israel to absorb Blacks who were forcibly deported from Israel. Benjamin Netanyahu is trying to negotiate a new deal with Rwanda so that the forced deportation of Blacks from Israel can continue.

Of course they want to get rid of them, nothing wrong with that and if we had people like Bibi in our own government no one could force us to let them in, no one.

“What happens to our dead people” by Papus Dualpha editions, Paris, 2016 This re-edition of this essential esoteric work was made by the house Philippe Randa runs to offer to the readers of our generation and neophytes a reading just perfect and dense on the values of Christian occultism. Gerard Encausse (the real name of Papus) was a French doctor who died in 1916, more than a century ago. He wrote this magical book shortly before his death but the first edition was made by his son Philippe Encausse in 1949 (also a doctor) by OCIA editions. We will try to summarize the content. On page 40 there are two quotes that we would like to reproduce: “a personal system more or less close to intelligence of the tradition” and… Read more »

Try talking about Israel’s immigration policy (of deporting ‘undesirables’ into Europe) over on Breitbart and watch as the reams of insults start flying at you. It’s all dreamed up apparently in order to demonise Jews.

Considering the Jew-created chaos in Libya, I’m surprised that nobody in the Likud thought of that already.

The logistics are a natural. Instead of costly flights, they could load up cargo ships full of negroes, sail to Benghazi, and force them out there. The city probably still has an active Mossad office to arrange things.

Once the negroes are shat out of the cargo hold and onto the pier, the smugglers will be right there to sell passage to Europe. The JEWS win twice with that strategy.