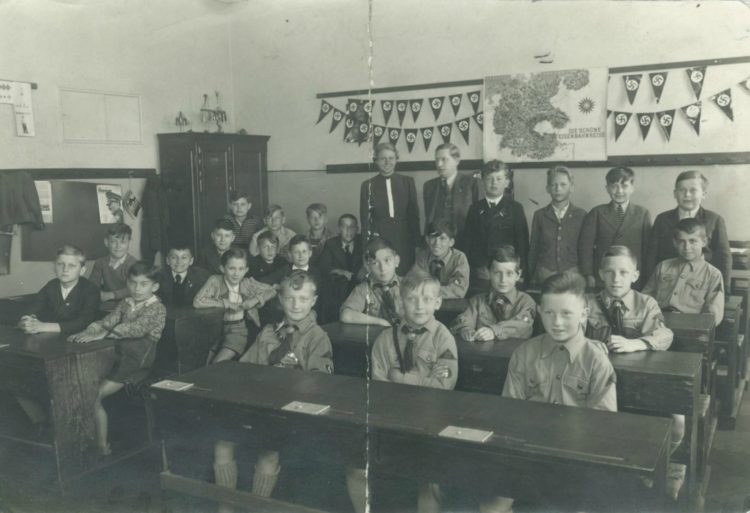 First published in Der Giftpilz, a German children’s book published by Julius Streicher. Immediately after World War 2, the Jews and their allies put Streicher on trial for writing and publishing things of which they did not approve. They executed him in 1946.

THERE IS EXCITEMENT in the air in Mr. Birkmann’s 7th grade boys’ classroom today. The subject is the Jews. The teacher has drawn illustrations of Jews on the blackboard. The boys look at them with rapt attention. Even the least attentive student, “Sleepy Emil,” is fascinated, and not sleeping as usual. Mr. Birkmann is an excellent teacher. The children like and respect him. Their attention is at its peak when he speaks about Jews. He does that well. He speaks from the heart. He learned what Jews are like from life experience. He knows how to express the truth in a moving way.

He looks at the clock.

He speaks: “It’s time. Let’s sum up what we’ve just learned. Who will tell me what we discovered in the last hour?”

Everyone raises a hand. The teacher calls out the name of Karl Scholz, one of the smallest boys, who sits in the front row. “We learned how Jews are different and how to recognize them.”

“Correct. What else did you learn?” 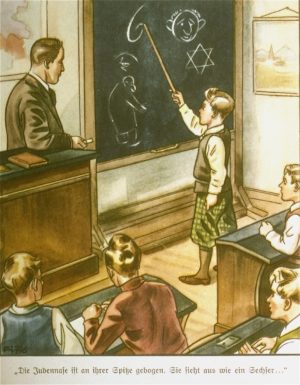 Karl boldly picks up the teacher’s pointer, walks up to the blackboard, and speaks as he indicates each drawing in turn.

“Much of the time we can tell a Jew by his nose. The Jewish nose is bent downward in a special way. The end curves down but the nostrils curve up, so the nose when seen from the side looks like the number six. This we call the ‘Jewish six.’ Many non-Jews also have bent noses. But their noses bend upwards, or downwards like an an eagle’s beak, without the odd upward nostril curve of the Jew’s nose. These German and other non-Jewish noses are not like a Jewish nose.”

“Good!” says Mr. Birkmann. “But is the nose the only way to recognize a Jew?”

Karl continues: “We can also tell a Jew by his lips. A Jew’s lips are usually thick and puffed-up. The lower lip very often sticks out. A Jew’s eyes are also different. His eyelids are usually heavier and thicker. The look about a Jew’s eyes is penetrating and distrustful. We can see from his eyes that he is full of deceit.”

Mr. Birkmann next calls upon Fritz Müller, one of the top boys in the class. Fritz steps up to the front of the class and speaks:

“Jews are usually of small or middle stature. Their legs are short for their body. Often their arms are unusually short, too. Some Jews are bow-legged and flat-footed. Like criminals of all races, Jews often have a low, receding forehead. The Jews are natural criminals. The Jews’ hair is usually dark and often kinky like the hair of an African. Jewish ears are often large, like the handle of a coffee cup.” [Some observers add that another strain among the Jews gives them low-set ears that are tilted backwards instead of straight up and down.]

“Listen closely, children. Why does Fritz say again and again ‘many Jews have bowed legs,’ or ‘Jews might have low foreheads,’ or ‘their hair is often kinky’?”

Heinrich Schmidt, a large, powerful-looking student in the back, stands to speak: “Not every Jew has these qualities. Some don’t have the expected Jewish nose, but do have the expected Jewish ears. Some Jews don’t have flat feet, but they do have Jewish-looking eyes. Some don’t even look like Jews at all at first sight. There are even some Jews that have blond hair. If we want to be sure to tell if someone is a Jew, we must look very carefully. But when we do look carefully enough, we can always tell a Jew.”

“Excellent,” says Mr. Birkmann. “And are there even more ways to tell a Jew from a non-Jew? Richard, come up and tell us!”

Richard Krause, a fair and cheerful boy, walks up to the front and begins:

“We can also recognize a Jew by his actions and movements. Jews often move their heads from side to side. Their walking is more like shuffling, and erratic in speed. Jews often move their hands a great deal when they speak. Sometimes the Jew talks in a peculiar tone of voice, largely through his nose. Jews often have a sweetish rotten smell. If your nose is sensitive, you can pick up on their different smell.”

Mr. Birkmann is pleased. “Those are the facts. You have learned your lesson! If you remember these rules as you live your life, you won’t be tricked by Jews.”

He walks back to the podium and rotates the blackboard. A poem is written on the other side, which the students recite:

If from anguish and darkness we want to be free, youth must take up the fight
To be rid of the demon in human form — and regain happiness, honor, and light

Muh Holohoax: More Should Be Done

Ha! So general, yet so true.
Another physical trait that I’ve noticed is the horizontally wrinkled lines above the brow. This stems from the “Who, me?!” angst the devious jew must constantly feign. Larry Silverstein’s rodentia visage is a perfect example of this.

On the subject of how to recognize Jews, I’m aware that George Montandon’s Comment reconnaître le Juif?, originally published in 1940, has recently been reprinted by Éditions du Lore under a somewhat different title, Comment reconnaître et expliquer le Juif? Speaking for myself, I think that recognizing the Jews is one thing, explaining them is another thing. They are the most strange, the most slippery, the most sinister, and the most repulsive of all the peoples on this earth. They are perhaps best understood, as some National Socialist writers put it, as an “anti-race” (Gegenrasse).

This translation is taken from Dr. Randall Bytwerk’s site, https://research.calvin.edu/german-propaganda-archive/index.htm

More about him here:

For a “pro Nazi” translation, see those of Gerhard Lauck: https://third-reich-books.com one of which has been reviewed here: https://nationalvanguard.org/2016/08/the-mongrel-and-how-the-jews-control-politicians/

This version is based on that translation, but looks like it’s been cleaned up and the clarity has been improved. Haven’t looked at Lauck’s version yet; thanks for posting it.

The method works!! I looked at a National Geographic cover and saw Jackie O with her prehensile grasping proboscis, and BINGO!, there it was..