The Terror that is Upon Us: Afro-Americans Gang-Rape 13-Year-Old, Receive Probation

A Colorado family is outraged after two of six men who gang-raped a 13-year-old girl were only sentenced to probation.

Tommy Williams, 20, and Clarence Williams, 19, were both sentenced on Tuesday to a minimum of 10 years of sex offender intensive supervised probation, with a maximum of life probation, reported KKTV.

They are part of a group, some of whom are cousins or brothers, identified as Jacolby Williams, Tyron Williams, James Williams, and an unnamed juvenile, who assaulted the girl in December 2016.

‘There was six of them and they gang-raped my granddaughter,’ the girl’s grandfather yelled in court according to KKTV.

He was forced to leave after he engaged in a shouting match with members of the Williams family.

The rape occurred at the Stonebrook Terrance Apartments on the 4000 block of Tappan Drive.

The girl told authorities that one of the suspects, whom she knew, invited her to the apartment to play video games.

She said she went to the apartment with some female friends and, when she went to use the bathroom, the friends left.

According to court documents, two of the men reportedly pulled her out of the bathroom and into a bedroom where the other suspects were waiting.

At a sentencing for some of the other suspects in February, the teen’s grandmother said her granddaughter was rotated around the bed ‘like a hand on a clock’ during the rape.

Her grandmother added on Tuesday that the teenager might never be able to have children because of the attack.

KKTV reported that, prior to the sentencing, he apologized to the victim and her family, saying: ‘If I knew she was underage, it wouldn’t have happened in the first place.’

Editor’s note: Well I guess that makes everything OK then! 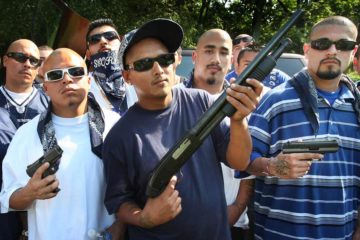 If the rape victim was a ‘gro, then I don’t care.

Me
Reply to  Jimmy Crack Corn

Yep. I see this as a big win. If grampa is really pissed, he’ll kill the two boons on probation and go to jail. The girl is sterile and the other monkeys are in jail. What more could you ask for?

‘Same as it ever was …’ as the song goes. I remember, back in the 80s I believe, a black guy by the name of Nathan McCall was being interviewed on some late night show about a book he had written. As a black man from a “disadvantaged background”, this was quite a remarkable feat -writing a book and graduating from college. A two-fer if you will. The title was “Makes Me Wanna Holler”, and I admit it sounded interesting enough at the time, so I went out and bought a copy. (I know, I know) Guess what was discussed as regular behavior growing up in the hood. Bingo – gang rape. Something so common, almost a rite of passage. For the brothers that is. Turns out females aren’t always… Read more »

Why is it that we must hear of this via the United Kingdom Daily Mail? Doesn’t the American MSM see this as newsworthy? I guess arresting two Negros in a Starbucks trumps this news item?

The Terror that is Upon Us: Afro-Americans Gang-Rape 13-Year-Old, Receive Probation