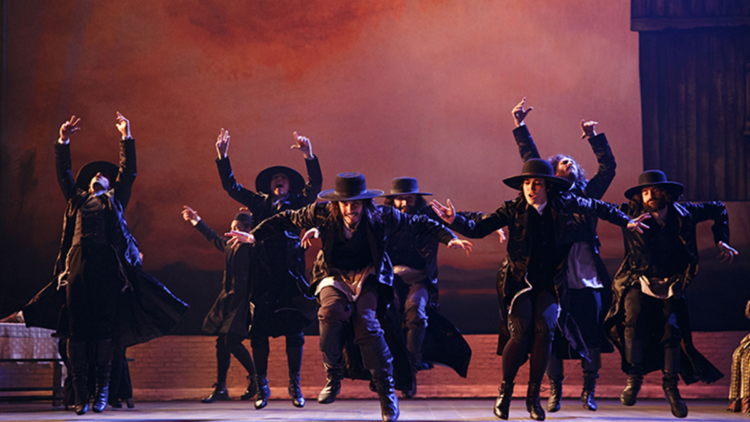 A MUSICAL-YOU’VE-ALWAYS-WANTED-TO-SEE-BUT-HAVE-DESPAIRED-OF-FINDING-ON-BROADWAY: “Goldburgle!”, a tender allegory on the racial issue. Excitingly contemporary but with some very novel twists, this is the wonderfully real story of the struggles of a modern hero who reflects everyone’s troubles in his own, Christian style.

Oliver Cromwell Goldburgle, as this hero is called by those who know him, is a cross-eyed, Negro-Jewish dwarf with a humpback, cleft palate, club foot and halitosis. He is also paralyzed from the waist up, and has rickets, tuberculosis, scattered cancers, and a peculiarly malignant form of water on the knee. He suffers from the full list of psychiatric troubles, but, like St. Jerome, wrestles to improve himself. (“If anyone could have taken refuge in environmental deprivation as reason to quit, he could have,” says James Baldwin. “Why he didn’t, we’ll never know.” Saul Bellow agrees with that assessment.)

But Oliver is endlessly cheerful and universally popular, nowhere more so (as we learn in Act I) than at Oxford (England), where he took his doctorate in comparative prejudice. We are told that C.P. Snow called him, “the best of a particularly rich year.” Ted Heath said he would have taken him sailing, “except for the … er. ..difficulties of bringing all his … er. ..equipment aboard.”

(In discussing this musical at the Boston Friends of Albert Einstein and Neil Simon Holocaust Dinner, John Galbraith pointed out the importance of this period for Goldburgle: “Like Ike Eisenhower, he matured there. It is unthinkable to think of Ike without the European polish, and it is equally unthinkable to think of Oliver Cromwell Goldburgle without the German experience. Ah, the Rhine, Heidelberg, the dueling scars … ” Reminded that Oliver had been in England rather than Germany, Galbraith immediately and adroitly corrected himself, ” .. .the Avon, Cambridge, riding to hounds. If environment is everything, then a change in environment must be even more, especially if it involves crossing a large body of water. “)

Now back in the United States and lecturing at Columbia University in his specialty, Goldburgle is married to a “top-drawer socialite” (we quote from the program), who cares for him tenderly in their (formerly her) eighteen-room Fifth Avenue apartment, which is always awash with the rich and famous of six continents come to talk over world conditions and deep-soul problems with Dr. Goldburgle. Jackie O., who lives nearby, is a constant visitor, with the kids. (They play with his kids. He couldn’t have children, but adopted them, according to Art Buchwald, “along strictly Mendelian lines, as though they were really his, by her. One very dark, two in the middle, and one light. They line up like the calibration on your toaster dial.”) Henry K. is there at all hours, storing up Goldburgleisms for future edicts. Andy Warhol and Fritz Mondale sit at his feet. Katherine Hepburn, Barbra Streisand and Bo Derek are in attendance. In fact, Barbra leads the ensemble in the first big number, “Black Is Bananas!”

Margaret Mead found this song, ” … one of the most significant contributions popular music has made to anthropology. In refuting all racial animadversions — especially the subconscious notion, still held by a surprising number of people, that blacks and trees are inexplicably connected — it is important to be subtle. And if any tree — or shrub or legume or…well, vegetable growth in general — is more offensive than the banana tree, I haven’t heard of it. To meet this tree head on, to settle once and for all the black banana myth, but subtly rather than brutally, what better forum could there be than the popular stage? To go a step further and actually enshrine the myth in a catch phrase, in order to fix it like a butterfly in amber — perhaps I should say like a banana in hand — not only shows courage of the highest kind (that goes without saying, but I shall say it to reinforce it, Skinnerily) but also demonstrates a fine grasp of tactics. For how else can the myth be destroyed? It must first be set up, and then knocked down. It can’t be done the other way round. ‘Black Is Bananas!’ left me fully satisfied, demythed, unprejudiced… highly post-orgasmic.” Jane Fonda, however, differs with Margaret: “I didn’t think it had anything to do with trees. I thought it meant they were bananas because of slavery and not being able to ride in the back of the bus all those years when we were so bad to them, and now we have to …well, un-bananas them, if that’s possible. Or even good English. Hope so, certainly, on both counts. I do agree, though, that it’s a satisfying number. Orgasmic? You’ve got to be kidding, it’s really a clean show.”

All seems for the best with Oliver C. Goldburgle and his beautiful bride (silken-shanked, Nordic-nosed, overcome with her good fortune), but there are telltale signs. In Act II, he tells Cary Grant and Rose Kennedy (in the tender solo, “I.Q., U.Q.!”) that he’s been reading Arthur Jensen. A bit later, in a powerful but disturbing scene, he throws his framed, autographed photograph of Jake Javits into the fireplace (quattrocento, ablaze) before the horrified eyes of Bill Buckley, who remonstrates with the moving, “Are You Sure You Know What You’re Doing?!”

In the show’s Mozartian subplot, Tessie, the parlormaid, is in love with Frank, the second footman, who is in love with Yolanda, the dog groomer, and up to this point we have seen them singing and flirting and chasing each other about, when the principals are offstage, in lighthearted counterpoint to the main action. But now the thrust of Buckley’s song is that one of the three (he doesn’t know which) is an Israeli agent, and that Oliver must be very careful. As Bill sings, all three enter and leave, and he must warn Oliver without alerting the agent. “The lyrics are really so clever,” says Louis Auchincloss, “that one really quite forgets the reality of the situation. But isn’t that often the case?” Incidentally, in a later, sparkling duet, Tessie and Yolanda learn that each is a transsexual. Frank joins them, and in a true tearjerker (“Me, Too, Tutu!”) reveals his own crossover. “I can’t recall ever being so moved,” says William Styron. “The technical innovation of reducing the traditional operatic subplot to the very honest question of surgical expediency and expertise is nugatory in the extreme. Sharp theater, a real winner, should mean big bucks, high numbers, paperback auction, a definite movie sale, tax shelter necessity -­- what a sweet problem that is, we should all have such problems — yes, like they say in pro ball, this musical came to play.”

Returning to the main plot, trouble builds. Oliver won’t attend Holocaust Dinners, refuses to read Norman Mailer, and lots more. In the play’s climactic scene, he springs from his chair (figuratively speaking, of course) and shouts to Alistair Cooke, Tony Powell, John Updike, Joe Namath and Ronnie Reagan, all of whom he has been instructing in differential prejudice in Piltdown man (as deduced from the telltale patterns of carbon deposits in the prejudice area), “I’m a nigger!” He then sings this, the show’s really big, big number. To say that it’s a show stopper is, as Johnny Cheever puts it, understatement at its most understated.

After the song is over and order restored in the theater (count on a good twenty minutes), they try to calm him down, but he’s adamant.

Despite his enriched physical handicaps, he insists on going back to the South and picking cotton. His distraught bride implores him to stay and “Enjoy!”, but to no avail. Even the adopted children’s lament (“Colormated, But Not Sated … With You!”, a sophisticated, Cole Porterish, tongue-in-cheek heartstring tugger with undertones of both Malcolm X and Shirley Temple) leaves him unmoved. Frank Sinatra, Tony Bennett, Alan Aida, Cheryl Tiegs and Peter Beard beg him not to let the race down, but he won’t listen to anybody, not even the ghost of Martin Luther King, Jr., as invoked by Linda Ronstadt and Jerry Ford.

“I must atone,” he sings in the play’s overwhelming close, just before leaving for Birmingham (Alabama), adding, in the number’s cryptic chorus, “for everything.”

Music by Abraham and Eveson (adapted from Palestrina and Verdi), and also by Moses Beowulf (adapted from Stephen Foster). Lyrics by John Quincy Auschwitz (with special credit to the private correspondence of Goethe, Spinoza and Jack Johnson). Book by the Fondas (all). Based on an unpublished column by Walter Lippmann.

Staying Sane in a Crazy World
Unburying the Truth at Wounded Knee
Willem Mengelberg
The Early Days of the Neocons
The Shame of the West
Jews in Czarist Russia
Loving the Blacks, and Loving the Jews More
Bernie Cornfeld: Zeitgeister of Postwar America
Tags:Cholly BilderbergerHumorInstauration 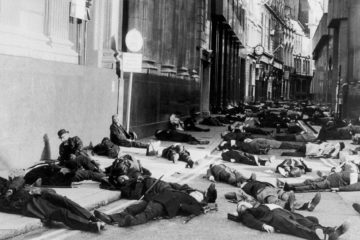 Cast Out Your Dead

It was a credit to Instauration readers that the piece contained such subtleties presuming we were well read. I’d COPY TO ONE’S PERSONAL ARCHIVES THE CONTENT OF what WIKIPEDIA currently says (14 December 2017) about the publication before it is censored/”revised” from history: https://en.wikipedia.org/wiki/Instauration As Stefan Molyneux, who has a thing for two to learn yet about race and especially the Jews but appears to be progressing and has a viewership/listenership volume worth courting, refers to magazines, newspapers, hard copies as Tablets made of wood. We should consider courting Molyneux for several other important reasons, not the least of which is his skill in helping others understand relatively complex subjects and his coverage of critical topics including interviewing G. Edward Griffin on the FEDERAL RESERVE SYSTEM and Molyneux’s rant on… Read more »

Where can we get tickets? Moly-jew is strictly kosher, and as a pastor once told me “if a jew’s lips are moving they are lying”.

Hitler told me that too when I was just a tyke, saying that jews are masters of the BIG LIE.

Stefan Molyneux
War In Syria: This Could Be The End
Published on Apr 8, 2018
~31 minutes
https://www.youtube.com/watch?v=ZAyeayfKnFE