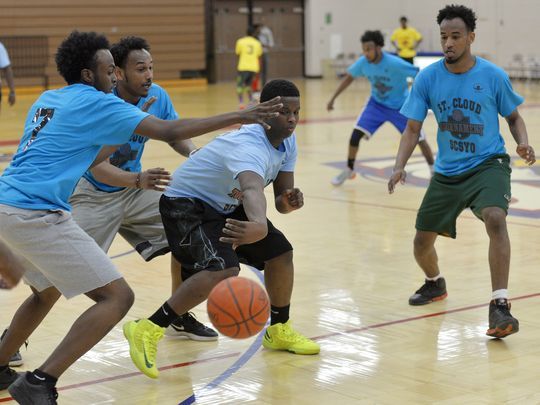 WHETHER YOU’RE a do-gooder in a cucktian church, a globalist scumbag dreaming of profits or a nation-wrecking Jew parasite, we can all agree that White countries need a lot more malformed 60 I.Q. genetic aliens from sh**hole countries. Once here, “dem programs” will convert a failed branch of humanity into the next generation of neurosurgeons, mechanical engineers, rappers, oceanographers, geologists and Liberia Tree Hockey stars. Nature’s unsuccessful experiment in creating a human being is full of unlimited potential, as long as that wallet stays open and you keep ignoring a reality that might contradict some of these arguments.

A crowd of young Somali girls has just finished an hour of basketball. Now they head to the classroom upstairs for tutoring, and of course an occasional dance to Drake’s “God’s Plan.”

These girls, most of them first-generation immigrants, are Skyway residents in the Somali Youth & Family Club, a nonprofit program which holds afterschool programs in Skyway’s Creston Point Apartments. Creston Point has almost 500 units, and many of the residents are Somali immigrants and refugees.

Work hard at a job you hate, don’t have children because you can’t afford them, become an alcoholic or opiate addict and for g*d’s sake keep paying those taxes. We need many more “units” to house Africa’s worst. Fund the enemygrants that will replace you and then die. Then we’ll tear down any memorials and curse you in your grave. This is a great bargain for you, gentiles.

Around 100 Somali youths are in the program, which holds sessions five days a week and allows children of all ages to participate. Members can receive tutoring, play basketball, read and write poetry, and swim.

Don’t forget, many of these misshapen and moronic mutants are great swimmers, literary gentlemen and able to “slam dunk” a “bakkaball.” If this doesn’t convince you to destroy your ancestral homeland, you don’t have a heart.

The nonprofit program is able to run events like this thanks in part to a recent $855,000 grant from King County’s Best Starts for Kids initiative.

Or, more accurately, taken from the earnings of Seattle’s vanishing and delusional White population and spent on biological weapons being used against them.

The program started in 2007, and is currently overseen by Aden Hussein, a Somali immigrant who came to Skyway in 1999. Hussein says the program has been remarkably successful.

Success beyond our wildest imaginations! Many of the foreign invaders are now able to put a ball through a metal loop, a very useful skill in an increasingly complex and technological society.

The grant was part of an $8.7 million investment by King County into organizations led by people of color.

Feeding the shekels into a fire would have been a far superior investment.

Salaman Said, 23, has been a tutor with Somali Youth & Family Club for over a year. He spoke of the creativity of the children, and how they each learn in a unique way.

The endless miracles of a mind that would be considered mentally retarded in a White person, but is completely normal for a vile tar creature that carries foreign DNA not shared by any other race.

“The goal of the program is to make the tutoring fun,” Said said, “because they will grow tired of only doing [work on paper].”

While optimistic about the changes, Hussein spoke about the needs of Skyway residents that still need to be addressed, particularly in regards to housing.

A New Religion for Us, part 8

REMEMBER!!! It’s not the third-worlders you should hate. It is (((those))) who successfully MIX those third-worlders with your kind that deserve your utmost abhoration. NEVER forget this fact.

Deep inside every societal and cultural boil, is a Jew feeding the infection.

It’s not enough to lance the boil and drain out the 3rd World infection but, the wound must be treated with anti-septics (good old-fashioned White Christian intolerance) and covered with a sterile dressing (discrimination, prohibition of 3rd World immigration, and laws that squelch occupations popular with Jews).

I can’t imagine where those players pictured will fit in our society. The best we can hope for is that they work in a “fulfillment center” without shooting their coworkers when having a bad forklift day.