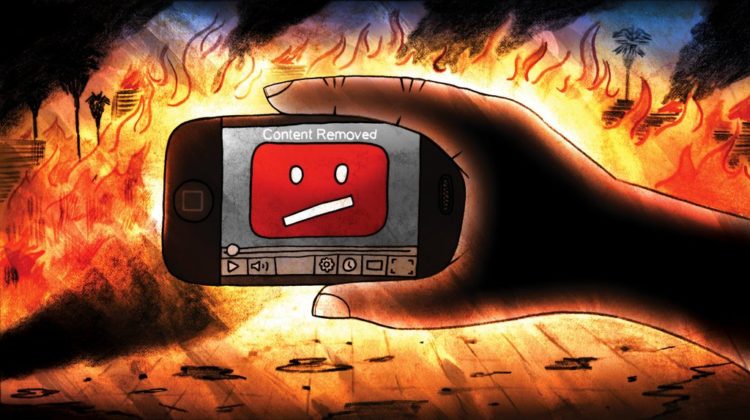 WE BEGIN THIS week’s edition of the Jewish War on Free Speech with the news that while right-wing Israeli media outlet Arutz Sheva has been screeching that ‘anti-Semitism is everywhere’ (and in everything… even if it is denied). (1)

Jews have been screaming at YouTube to ban accounts that they don’t like, (2) while publishing Orwellian articles in their own communal media featuring recommendations about how governments can please their self-chosen masters by implementing free speech controls on the Internet so that while Jews can say what they like, the insolent goyim most certainly cannot. (3)

This is presumably to ensure that Jews do not have to conform to the same standards as non-Jews online and thus have their accounts shutdown for ‘problematic imagery’ — such as a Yellow Star in one case this week — (4) so that Jews can say do and what they like. Much like George Schteinberg — former Israeli Consul-General in Rio de Janeiro — who has been previously linked to a paedophile ring and who is allowed to say what he wants about goyim, because he is a member of the self-chosen master race. (5)

Link this to the uniquely Jewish cultural artifact of chutzpah and it isn’t hard to see that ‘anti-Semitism’/‘anti-Semite’ is simply a synonym for ‘something/someone Jews don’t like’. As has been demonstrated this week by claims that:

– If you don’t provide special security personnel to protect Jews then you are ‘anti-Semitic’. (6)

– If you compare the Star of David to the Swastika then you are ‘anti-Semitic’. (7)

– If you tweet about a Hasidic Jew then you are ‘anti-Semitic’. (8)

– If you produce comedy socks that look like Adolf Hitler then you are ‘anti-Semitic’. (9)

– If you are the legal representative for someone that the Jews don’t like then you are ‘anti-Semitic’. (10)

– If you aggressively collect sewer duties then you are ‘anti-Semitic’. (11)

– If your inquiry into ‘campus anti-Semitism’ doesn’t reach the politically correct conclusion then you are ‘anti-Semitic’. (12)

– If you draw a caricature of a Jewish politician then you are ‘anti-Semitic’. (13)

– If you sing a traditional football song then you are ‘anti-Semitic’. (14)

– If you name your new train after Anne Frank then you are ‘anti-Semitic’. (15)

Combine all this with the fact that Israel can now unlock all of your secrets on your mobile phone. (16) While it has its military personnel beat up any one who criticises it. (17)

That is our future if we do nothing.

The classic tactic of the current enemies of our people: if we do not like it, lets label it something which our media has taught the lemmings must be bad. Question the use of gender labels? Racist! Draw parallels between the treatment of Palestinians and totalitarian repressive measures? Hatemonger! Suggest that certain historical events be studied with an open and academic approach? White supremacist! It all just serves to dumb the general population down and keep them afraid to speak out so they can be carefully herded toward that cliff.