An excerpt from a novel by David Sims

WE WERE RECLINING in lawn chairs on the artificial beach at the verge of one of Splash’s raft-continents. Brenda was taking a break from developing the habitation infrastructure of the all-ocean planet. We were going sailing in a little while in a replica of one of the wooden ships used by Europeans in the 16th century on Earth, complete with a crew of handsome sailors whose acquaintance Brenda had made all those billions of years ago. I thought that she was snoozing under her hat, but you can never tell. So I asked, quietly.

“What was the last naughty thing you did in school?”

“It wasn’t cheating in the relay races. I know you quit doing that.”

“I had to,” said Brenda. “People were getting suspicious. A black woman attending the track races between Brookstone and — I forget whom we were competing against that day; it might have been Columbus High — pushed a white baby off the top row of seats to make room for her fat ass. I couldn’t do telekinesis back then, so I had to zip behind the stand, moving much faster than any human could run, or that baby probably would have died when it hit the ground. I caught the carrier seat, and the baby wasn’t hurt. Or not much. The black woman wasn’t even arrested, even though it was clear what she had done. The baby’s horrified mother saw the whole thing. I remember that she had a devil of a time trying to persuade bystanders to admit that they’d seen it too.”

“I heard about that,” I said. “But I didn’t know that the baby was pushed off the top of the bleachers.”

“The news media made it seem as if it were an accident caused by parental neglect. They tried to blame a white woman for a black woman’s crime. The obese Negress somehow avoided legal punishment for attempted murder merely by telling lies and by referring loudly to some imagined self-righteous justification. I’ve forgotten what it was, but it worked like magic. I think that’s what ‘black magic’ really is: the ability to do something despicable, then refer to a period of slavery that ended two hundred years earlier, and thereby make everybody lose interest in a crime that happened two minutes ago. One of the nicest things about the universe now is that there aren’t any blacks in it anymore.”

I looked across the red sand of the beach, each grain of which was a smooth ruby pebble about a millimeter wide, and silently agreed with that.

“You were hailed as a hero. Nobody seemed to notice your speed as you ran to the rescue.”

“That isn’t so. Several persons noticed my quickness. But I was a track star. I was supposed to be fast. People are usually pretty good at convincing themselves that they didn’t really see what they believe should be impossible,” said Brenda. “And it was a short run. So when they briefly observed me moving at thirty meters per second they rationalized it downward to their preconceived norms. My track coach wouldn’t have, but he wasn’t looking at me just then.”

Brenda wiggled up a little higher in her seat before continuing.

“At the time, I refused to admit to myself that I was cheating. There wasn’t any rule against using goddess powers to compress time while radiating my thermal excess into hyperspace. I started feeling guilty later because I wasn’t competing against my equals. I look human, but I am not human. My playing sports with mortals was like pitting a tiger against mice.”

“That isn’t what I asked about,” I said.

“Oh. Hm. You understand it has been a while, so let me think…”

Brenda pushed up the brim of her light brown, made-in-Ireland wool tweed bucket hat and stared across the water at the horizon.

“Yes, I think I have it. I was in the eleventh grade, and you in the twelfth, at Brookstone GSC. I’d recently graduated with my first Bachelor’s degree from the college campus. But it happened in the eleventh grade math class. The teacher was Mrs. Jacobs. She brought in a black man who knew how to use an abacus. The demonstration was political. It was to give us high school students the impression that blacks were capable of great inventions. The abacus was held up to be the equal of a computer.”

“I am, Ruby. I should say, though, that the assertion was mostly implicit, the result of situational picture-framing. But the hints were all there. The abacus operator even referred to his bead-and-wire device as an ‘African computer.'”

“What naughty thing did you do?”

“We were told in advance about the scheduled visit of the black abacus-operator. I got together with some of the other students and we conspired to stage a counter-demonstration of a sort.”

“Okay. When the black fellow had finished showing off how quickly he could add, subtract, multiply and divide using an abacus, and asked if we had any questions, one of the students in the class stood up and asked ‘What is the arctangent of two?'”

“Can that be done on an abacus?”

I laughed. Brenda appeared to hesitate a moment, then shrugged.

“Actually, the questions we asked could be found with an abacus, though it would take some work. The arctangent and the natural logarithm are often approximated with power series, and a cube root can be estimated from a Taylor series expansion. The limitation was really the operator, rather than the abacus. Most whites couldn’t have done it. Forget about a black.”

There it was. A tall ship a hundred feet offshore with twenty of the handsomest sailors you ever did see looking at us respectfully from where they stood or perched on deck, yards and lines. I think that they knew me. I know that they recognized Brenda, who’d given them their ship in return for free voyages anytime she wanted to go sailing. I wondered if they knew that they weren’t on Earth. Probably not, despite the slightly higher gravity of Splash. From the diaries of the earliest Rubies I’ve surmised that these fellows were accustomed to the rapid changes of location that Brenda could bring about.

Tonight, she would tell them they were among the first colonists of a water-covered planet in a galaxy within the Perseus-Pisces supercluster, several hundred million light years and fourteen billion years from home. Brenda would give them homes near the shore, supplies, jobs ferrying their fellow colonists around the raft-continent’s interior waterways, and she’d introduce them to some pretty young women.

I don’t think that she would tell them that they were recorded in the Equipment database. She isn’t mean.

You Have to Know

The Decline and Rise of Whites 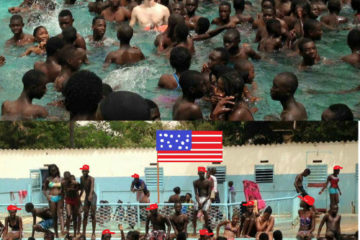