A SCHOOL SOMEWHERE in the American sprawl was recently shot up by a White supremacist Latino. The endless fake news coverage has provided a clear, accurate and highly sane picture of what occurred and what must now happen in response. We must give up our guns, give up our rights and drug our children to ensure that this sort of thing never happens again. Speaking of “never again,” are you aware of the Holocaust? Probably not, it is a very minor historical footnote that is almost completely ignored, especially by the pure and innocent victims. This deep “ignorance” has resulted in a fresh shoah in Germany, the most evil of nations that must be destroyed make the transition into multiculturalism. It appears the Teutonic answer to LensCrafters has committed Sign Crime.

A Hamburg optics store received widespread criticism for its insensitive choice of name — Six Million Glasses — which evokes a Holocaust connotation of the six million Jews killed by the Nazis as well as the image of a huge pile of glasses, disposed of by Auschwitz victims as they went to their deaths.

The shocking insensitivity of a race so wicked and irredeemable it must be destroyed by endless Muslim invasion from without and spiritual poison from within. Your name reminded the traveling merchant of the precious six million lost in 1919. And also the Soviet war propaganda from Europe’s Second Jewish Century Suicide Attempt, don’t forget that.

The store announced that they will change the name to A Million Glasses.

The new name, guaranteed to not offend anyone, will be “1488 Aryan Spex.”

A few months ago, a photo of the shop’s sign was uploaded to Facebook and caused an uproar on social media. The business was quick to declare that they were not racists and are opposed to anti-Semitism.

I guess in a country where you can be imprisoned for Crime Think it’s going to be difficult to tell the wailing chosenites to go to hell, but the legally required abasement still seems excessively weak and pathetic.

They claimed that the name was inspired by the TV series “The Six Million Dollar Man” and not by anything Holocaust related.

We can rebuild the European Man. We have the technology. Make him better than the rapidly dying groveling cuck he was before. Stronger. Nationalist. Proud. Not afraid of being called names.

Omer Frenkel, 45, an Israeli conductor working in Germany, was one of the first people to raise the issue on Facebook. He expressed exasperation at the fact that it did not occur to anyone at the shop that the name can be considered hurtful.

My spellcheck doesn’t think “Holodomor” is a word, recommending “morphology” as a suitable replacement. A single whining alien Jew can generate endless apologizing and cowardly appeasement. Powerless and persecuted for no good reason, the favorite of g*d, the Light of the World, the best people you’ll ever meet, the Jew.

“From my experience living in Germany, I can say that there is a lot of ignorance regarding the Holocaust. In Israel, via the education system, the words “six million” automatically connote the Holocaust… Education in Germany is lacking.”

Despite a holohoax memorial on every corner and endless humiliating “education,” the rapidly vanishing German population doesn’t know the correct phony number. We must educate the shkotzim before they’re completely annihilated.

Frenkel added the lack of sensitivity in the name choice is itself troublesome, as the Germans repress the issue of the Holocaust to the margins and do not invest the necessary resources.

Honestly, you could walk several paces without seeing some reference to your shared guilt.

The Israeli expat iterated his belief that if younger generations in Germany did not gain more awareness, history could repeat itself.

Please, foreign parasite, lecture me on what’s best for my homeland, the one you’re constantly working to undermine.

“We support social tolerance. Our staff is diverse and comprised of people from all ethnicities and orientations and in the past we have assisted refugees and even given away free pairs of glasses during the crisis. The Holocaust connotation never occurred to us until a woman pointed it out last year.”

I gave away hand-outs to rapefugees! I love the Jew and the sodomite and all the dark inferiors! I disavow! I DISAVOW!!!!!!! 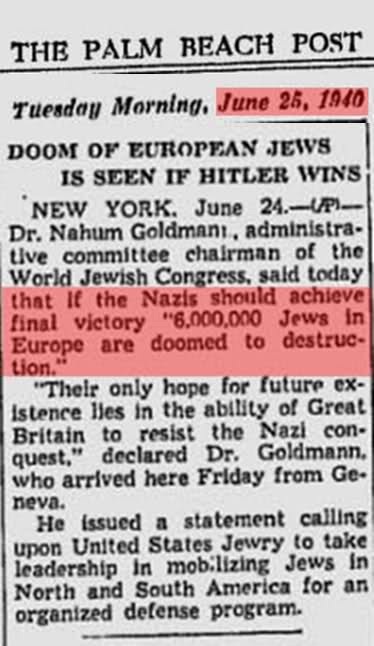 The Fame of a Dead Man's Deeds Audio Book: Schooling

I’m convinced that stuff like this is a complete set up to create a reason to keep mention of the holocaust in the news. Even I know that choosing such a title for your store would not be a good idea in Germany, where the oppressive specter of the holocaust is ever present, hanging over and permeating every aspect of life, and I don’t even live there. How could a German store not know the title, 6 Million Glasses would be a bad idea? I don’t buy it. LensCrafters is a corporate entity, and we all know who runs these international businesses. It wouldn’t be difficult at all for them to set something like this up for the sole purpose of generating pre-planned “outrage” just so the holocaust has one… Read more »

Mc Marbas
Reply to  Over It

Re: David Irving.
The definition of that.
hol·o·caust
ˈhäləˌkôst,ˈhōləˌkôst/Submit
noun
historical
a ‘Jewish’ sacrificial offering that is burned completely on an altar.
(Also helped keep the 6 mil
# alive)
German ruling says Dresden was a holocaust.

This is really a gas (pun intended)!