Profile of a Jew Piece-of-Filth: On the New York Times’ “Conservative” David Brooks

“A nation can survive its fools, and even the ambitious. But it cannot survive treason from within. An enemy at the gates is less formidable, for he is known and carries his banner openly. But the traitor moves amongst those within the gate freely, his sly whispers rustling through all the alleys, heard in the very halls of government itself. For the traitor appears not a traitor; he speaks in accents familiar to his victims, and he wears their face and their arguments, he appeals to the baseness that lies deep in the hearts of all men. He rots the soul of a nation, he works secretly and unknown in the night to undermine the pillars of the city, he infects the body politic so that it can no longer resist. A murderer is less to fear. The traitor is the plague.” 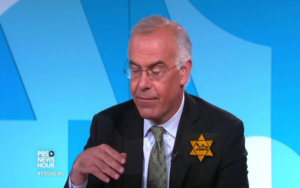 THE LAST TIME we caught up with the New York Times’ “conservative” douchebag David Brooks, the little rat was whining about the election of Donald Trump and calling for the creation of a new globalist party to pick up his cherished mantle of “free trade,” “skilled immigration” and “widening ethnic diversity.”

This time the kike returns to explain how ridiculous White Americans are for not wanting to become a minority in their own country:

Every few years I try to write a column staking out a reasonable middle ground on immigration. After all, most big, important issues are clashes in which both sides have a piece of the truth.

The case for restricting immigration seems superficially plausible. Over the last several decades we’ve conducted a potentially reckless experiment. The number of foreign-born Americans is at record highs, straining national cohesion, raising distrust. Maybe America should take a pause, as we did in the 1920s. After all, that pause seemed to produce the cohesive America of the 1940s that won the war and rose to pre-eminence.

Every few years I try to write this moderate column. And every few years I fail. That’s because when you wade into the evidence you find that the case for restricting immigration is pathetically weak. The only people who have less actual data on their side are the people who deny climate change.

Welcome to the Jews’ alternative reality! Brooks’ contention that the case for restricting immigration is weak is undermined by the obvious fact that, to paraphrase Steve Sailer, there are 7 billion non-Americans in the world, and if the U.S. doesn’t restrict immigration, over 100 million of these non-Americans will quickly pour into the United States until the entire country turns into a failed, third-world toilet.

Brooks would like his readers to not just ignore the threat of this global demographic time-bomb, but to actually welcome the catastrophe it would bring based off his word that it’s actually in our interests to be dispossessed!:

You don’t have to rely on pointy-headed academics. Get in your car. If you start in rural New England and drive down into Appalachia or across into the Upper Midwest you will be driving through county after county with few immigrants. These rural places are often 95 percent white. These places lack the diversity restrictionists say is straining the social fabric.

Are these counties marked by high social cohesion, economic dynamism, surging wages and healthy family values? No. Quite the opposite. They are often marked by economic stagnation, social isolation, family breakdown and high opioid addiction. Charles Murray wrote a whole book, “Coming Apart,” on the social breakdown among working-class whites, many of whom live in these low immigrant areas.

One of Murray’s points is that “the feasibility of the American project has historically been based on industriousness, honesty, marriage and religiosity.” It is a blunt fact of life that, these days, immigrants show more of these virtues than the native-born. It’s not genetic. The process of immigration demands and nurtures these virtues.

Over all, America is suffering from a loss of dynamism. New business formation is down. Interstate mobility is down. Americans switch jobs less frequently and more Americans go through the day without ever leaving the house.

But these trends are largely within the native population. Immigrants provide the antidote. They start new businesses at twice the rate of nonimmigrants. Roughly 70 percent of immigrants express confidence in the American dream, compared with only 50 percent of the native-born.

How does a sane person reply to this drivel? Well, first off, Brooks’ narrative about crappy “Americans” versus noble immigrants is complete garbage by virtue of the fact that it totally fails to differentiate between prototypical White Americans—who made up 90 percent of the country’s population as recently as 1950—and the bulk of the non-White “Americans” who now occupy the country thanks in no small part to Jewish lobbying. (Not coincidentally, Brook’s fellow rat at the Times Bret Stephens has peddled this same exact immigrants-versus-“Americans” nonsense before. Is the tribe’s parasitism genetic?)

Second, Brooks’ insinuation that the downtrodden regions of Old America are depressed due to their not having enough vibrant immigrant diversity is beyond insane, and really another Jewish whopper for the ages. The truth is that Whites in America’s former rust belt are suffering terribly due to the horrid aftermath of Jewish globalization, not because they haven’t had enough of it, so Brook’s narrative here represents not just a prime example of Jew-inversion at its worst, but also a prime example of an arrogant globalist blaming his hosts for the grave misfortune they suffer as a result of his elite predation.

Finally, as Steve Sailer has noted, Brooks argument that third-world immigration brings prosperity is conclusively falsified by (1) the example of California which, when adjusted for the cost of living, “has both the most foreign-born residents and the most impoverished people in the country”; and (2) the example of Florida “which has the second highest percentage of immigrants,” and therefore, not coincidentally, the “second high percentage of poor people.” As such, says Sailer:

In contrast to the Brooks Theory that West Virginians deserve their hard times for their sin of not having lots of immigrants, the Sailer Theory is that there isn’t much money to be made these days living on a dirt road in West Virginia, so immigrants stay away.

Is Brooks really too dumb to understand this, or his he a just a lying piece-of-filth? Sailer continues:

If you’ve actually studied recent economic trends, you’ll note that many of the depressed areas of the country are among the most diverse. For example, in California, the housing crash of a decade ago barely stressed white Malibu, while it hit hard the much more less white High Desert and the Inland Empire. Indeed, the housing bubble that wiped out the economy in 2008 was focused upon the immigrant-attractive Sand States of California, Arizona, Nevada, and Florida.

A recent academic study, “Immigrants and Mortgage Delinquency” by Zhenguo Lin, Yingchun Liu, and Jia Xie, found that in the crucial year 2009 Brooks’ dynamic, morally superior immigrants defaulted 3.6 times as often on their mortgages as us deplorable natives. American elites, such as George W. Bush and financier Angelo Mozilo, simply trusted immigrants too much. And judging by the effusions over the past week about how immigrants deserve this country more than Americans do, they almost certainly still do.

Yet Brooks’ assumptions about which parts of the country have been prospering aren’t even prima facie true. In this century, for instance, North Carolina, home to a huge influx of Latinos and blacks, has been economically depressed, while North Dakota has prospered.

Brooks’ idea that the reason Hollywood and Silicon Valley are so rich is because they have embraced the Latino immigrants who empty their wastebaskets is reminiscent of Richard Florida’s once-popular theory that Palo Alto’s Sand Hill Road was prospering because there were a lot of gays on San Francisco’s Castro Street only 33 miles away.

It’s only in a Jewish-occupied country that grown men would have to spend any amount of time debunking such nonsense.

And of course Brooks doesn’t even really believe the nonsense he tells the goyim. Otherwise why would his enthusiasm for immigrant-diversity just up and vanish out of thin air when it comes to the Palestinians who want to return to the land Israel has taken from them?

Brooks is clearly a parasitic, ingrate hack, and his presence a powerful reminder of how Jewish media control has been our race’s gravest misfortune.

Down the Slippery Slope 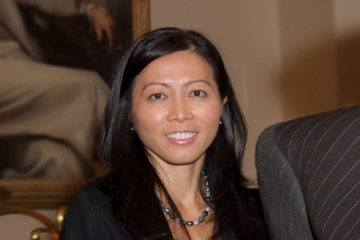 I have already had my Doctor Strangelove moment with immigration. I have come to love it and have stopped worrying about it. But we need the right immigration. 50 Million hardcore Taliban, ISIS and Al Qaeda should be brought in from the front lines. They must be allowed to practice their religion, carry their weapons and settle in Israel, Jew York City and every other shithole that demands the rest of the Western world be turned into downtown Mogadishu. Imagine the diversity in San Francisco during the Fulton Street fair where diverse degenerates and perverts rule the streets in broad daylight with a division of ISIS patrolling the streets. It is wrong for these diverse cities to resist further diversifying. Sharia Law would be a refreshing change of pace in… Read more »

Jew landlords in NJ and NY get to hike up rents thanks to immigration.

This article is a step down from National Vanguard’s usual standards with regards to coarse language. Of course, the desire to use such language when writing about creatures as disgusting as David Brooks is perfectly understandable, but a publication like National Vanguard has standards to observe. I think that cutting language is more appropriate than coarse language when writing about human abscesses.

Certain classes of goyim might have their bad behavior corrected with a two by four applied briskly to the side of the head, but there’s no way to beat the chutzpah out of Jews short of beating them to death. They’re incorrigible liars.

The language is appropriately fine. If you do not like you can always try Anne Coulter’s style. Just saying …

Actually Miss Coulter is starting to name the Jew, with the Epstein coverup. A giant step for mankind, IMO.

An entirely accurate article by Steve Sailor, and with him using suitable descriptive language. Perhaps with the Epstein scandal, he’ll expand his working vocabulary and begin employing the word, “pogrom”? One can always hope, right?

What would be the result if Brooks promoted the same agenda in Israel?!!!

Profile of a Jew Piece-of-Filth: On the New York Times’ “Conservative” David Brooks