The Distorted US ‘Right Wing’ View of Europe’s Situation 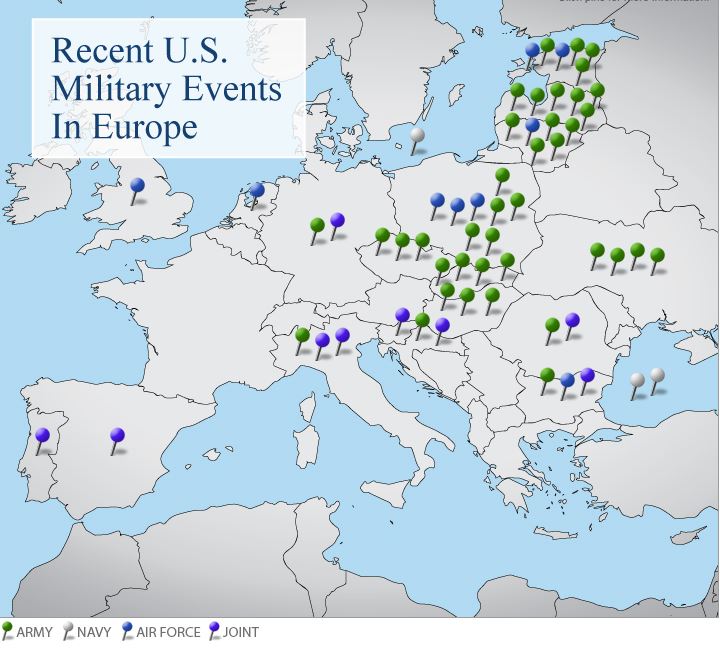 I recently read Coulter’s answers to a series of questions put to her by Voice of Europe. Her responses reflect assumptions that are taken for granted by the Trump administration and the entire ‘right wing’ complex in the US. The root of Europe’s problems is the continued US occupation and the structures, ideals, and institutions that it props up.

ASKED WHAT SHE thought of Europe’s ‘migration policy,’ Coulter responded:

Suicidal madness imposed on the good people of Europe by their idiot leaders. It’s not really “migration” at all, which is something that happens naturally. What you’re experiencing is a specific, evil government policy to destroy your countries.

The leaders that have implemented these policies are waste products of a system that are made possible by the continued US occupation of Europe. The instabilities generated by US policy in the Middle East, and elsewhere, become a liability for Europeans because 1) their countries are satellites of the US, 2) their leaders are pressured to buffer the effects of US policy by absorbing the fallout of the latter, and 3) nativist forces that strive to deflect fallout, including mass immigration, are stymied by structures put in place since World War II. This includes EU legislation and US influence designed to undermine ethnic identity.

Many of the “idiot leaders” Coulter refers to have been in place since Bush’s administration, such as Merkel, or even longer, such as Soros. These figures owe their influence to a US presence and to structures held up by the US, including the EU and NATO.

Asked why “the left is so powerful” in the “Western world,” Coulter responded:

I think the media.

The “leftist” media in Europe are so powerful because European nations are satellites of the US, and the US protects and promotes the interests driving the media. This includes vested interests, including Jews, working to weaken immigration policy and promote immigration to Europe from nations destabilized by US-Israeli policies in the Middle East. It is not simply “left” in origin. “Right wing” US politicians, such as McCain, promote multiculturalism and advocate wars creating conditions for mass immigration. Jewish groups or figures in Europe and the US, such as the ADL, are only possible because of decades-old US policies.

Native Europeans seeking to reverse or halt the policies of their “idiot leaders” are stymied by the enormous weight of US influence and its military presence in Europe. They confront mechanisms that are part of structures intended to preserve US hegemony.

Asked what she thought Trump’s impact and legacy might be in Europe:

I hope he provides aid and inspiration to the former communist bloc nations, which seem to be the only ones not anxious to give their countries away (again). For the rest, I hope that, when Trump finally keeps his campaign promise to place a moratorium on all immigration, he makes an exception for real refugees: Western Europeans who mourn the loss of their countries on account of their monstrous leaders.

The historical and contemporary reality of the US occupation of Europe and its support for structures and institutions that constrain Europeans is what is ultimately at issue.

The Cold War was the illegitimate offspring of an unnecessary and avoidable World War II. Hitler made repeated attempts to create an Anglo-German alliance and later efforts to make peace with Britain. It is responsible for Europe’s decline. First, Europe’s Empires imploded, a consequence of a convergence of US and Soviet foreign policies that were both opposed to European imperialism and colonialism. Second, the concomitant ethnic implosion of these nations, as immigration policy was structured to allow for mass immigration from their former colonial subjects and other nations. Lastly, a filtering into European identity of Soviet and US ideology, with man as an economic instead of an historical and biological entity.

More immediately, the volatility of US democracy and its ever changing electorate entails that Europeans can never rely on consistent US support for their racial, ethnic, and national identity and preservation. One administration challenges Europeans to welcome migrants while using US influence to successfully push for mass immigration to Europe, and the next administration castigates the previous one and urges Europeans to assert inviolate borders. Trump’s policies toward the beneficiaries of Obama’s policies (such as the DREAM Act) demonstrates how prior policies can quickly be reversed. And nothing will prevent the US electorate from installing a monstrosity that will perpetuate this schizophrenia.

A genuinely constructive role for the US in Europe’s future must start with acknowledging the consequences of US occupation over the course of seventy years. The goal must be to remove foreign elements from European nations, restore mechanisms to make the political, military, and economic structures of European nations viable, and direct a gradual removal of NATO and US forces toward the overarching goal of European autonomy.

Trump’s speech in Poland, last year, appealed to “the West” to reclaim a will to “defend our civilization.” But if you look carefully at the claims in his speech, it is based on appeals to the fact of World War II, references to the Holocaust, and very specific postwar configurations of power and relations. In other words, a very specific vision of “the West” is being propagated by the US right. It is a US-led, NATO-defended order, defined by Anglo-American views of democracy and civil liberties. Trump’s impetus to Europeans to reassert a will to life is not grounded in race, ethnicity, or even nation; not fundamentally. These are, to the US right, acceptable only to the degree that they sustain an American view of the West.

This view assumes the centrality of World War II as a good and righteous war that had to be fought, whose victors now enjoy hard-earned leadership roles, and in which any resurgence of German assertiveness must be checked, so-called “international law” must be upheld, and the sacrosanct place of the Holocaust as a moral substratum underlying political policy is cherished. This vision of the West takes values, ideals, and freedoms to be as constitutive of Europeans, if not more so, than blood, bones, and soil. Coulter, Trump, and others in the US right assume all or most of this, which distorts their views of solutions to the situation in Europe because they take for granted the structures that are destroying Europe.

Invaders Being Spread Throughout US on Commercial Flights

Calling the European leaders idiots and saying they are “pressured to buffer the effects of US policy” is doing them a great disservice. They know exactly what they’re doing and are acting of their own free will based on their shared, anti-White, globalist principles. Would anyone suggest that Angela Merkel, the alleged “former” East German communist who once rejected holding her own nations’ flag, would eagerly deport the 1.5 million invaders she personally invited into Germany if she only could…but her hands are tied? Please. Sweden, UK, France, Spain…the leaders are all the same. Forced mass migration isn’t suicide by stupidity; it’s premeditated murder. The other fatal flaw here is promoting the myth that the invaders MUST flee their countries because of US war hawk policy and that Europe must… Read more »

Absolutely true, why is he trying to absolve the European leaders for their continued genocide of white people; they are doing this to themselves; the fall of Gaddafi may have helped expedite the invasion from Libya across the Med, but there is no reason that Europe has to accept them, and could easily turn the boats back.

It was Coulter that referred to Europe’s politicians as “idiots.” The fact that both of you attributed that term to me shows that neither of you bothered reading this article closely. Merkel’s past in the GDR has nothing to do with her current policies. It’s empty rhetoric, trying to bridge those. But Merkel, and even Europe’s politicians and their motives, in general, are not the focus of this article. The point of this article is that Coulter, and the US “right” in general, are ignoring the root cause of the situation in Europe: US occupation, influence, and its support of the structures that make Merkel and others like her possible. Trump asked, in Poland, if the West had the will to survive, but that speech shows that his view of… Read more »

In the Long view, these “leaders/political commentators” (Trump etc.) are all on board with “Political Correctness” and obedience to
Jewish-Zionist interests. Their ‘promises’ for western improvement are shallow. For example, Trump has NEVER criticized the Federal Reserve, Fractional Reserve styled Banking or Usury. (Which really runs the show at the top of the pyramid by Tanakh/Talmudic-centric oligarchs, {YHWH’s chosen}).

It is worth noting that Angela Merkel got her last name from marrying a German man in the 1980s. Her real name is Angela Kasner, which is Jewish. Her family is actually ‘Polish Jewish’ originally and not even German. Poles and Jews alike hate Germans, so this explains their plan to Holocaust ethnic Germans while not doing the same to Poland and Israel. America-led western media is totally bias in favour of Poland without questioning why a Polish Jew is in charge of Germany. Trump is no better, having married into a Jewish family. His children have brown eyes, practice Orthodox Judaism, and his wife is a brown Turkish woman with slanted eyes. Both Trump and Pence can be seen worshiping the wailing wall online, showing who they really are.… Read more »

Edward Kasner and his daughter introduced the term ‘Googol’ to describe 1 followed by 100 zeros. Wiki mentions him being a jewish mathematician at Columbia Uni.

Here is a revision to this article, just in case your readers may be interested:

The Distorted US ‘Right Wing’ View of Europe’s Situation