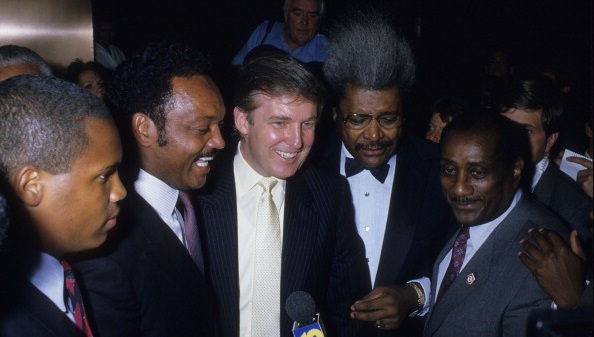 Eighty Americans from 42 ethnic groups were named yesterday as recipients of the Ellis Island Medal of Honor by the Statue of Liberty-Ellis Island Foundation.

The medals will be presented to the recipients, all either naturalized or native Americans, at a ceremony Oct. 27 on Ellis Island. That is the day before the 100th anniversary of the dedication of the Statue of Liberty, the final event of the 1986 Liberty Centennial observances.

The National Ethnic Coalition of Organizations presents the awards based on “integrity, passion, gravitas, humanitarian and ethnic heritage.”

Appearing on the Larry King show on November 19, 1991, Trump said he “hated seeing” what the strong political support of White nationalist David Duke meant in Louisiana, which was suffering a deep depression at the time.

King: Did the David Duke thing bother you? Fifty-five percent of the Whites in Louisiana voted for him.

On April 30, 1997, the Wall Street Journal reported on Trump’s purchase of the famous Mar-a-Largo club in Palm Beach, Florida, and how he opened up the club to Jews and African-Americans, putting him at odds against rival clubs in Palm Beach:

The culture clash began to approach a climax last fall, when Mr. Trump’s lawyer sent members of the town council a copy of the film “Guess Who’s Coming to Dinner,” a film that deals with upper-class racism.

Mr. Trump then approached the town council about lifting the restrictions that had been placed on the club. He also asked some council members not to vote on the request because their membership in other clubs created a conflict of interest.

Last December, after the council refused to lift the restrictions, Mr. Trump filed a lawsuit in U.S. District Court in Palm Beach, alleging that the town was discriminating against Mar-a-Lago, in part because it is open to Jews and African-Americans. The suit seeks $100 million in damages.

During a NBC interview aired on Feb. 14, 2000, Trump blasted Duke when explaining why he was leaving the Reform Party:

Matt Lauer: When you say the party is self-destructing, what do you see as the biggest problem with the reform party right now?

Mr. Trump: Well, you’ve got David Duke just joined — a bigot, a racist, a problem. I mean, this is not exactly the people you want in your party. Buchanan’s a disaster as we’ve, you know, covered. Jesse’s a terrific guy who just left the party. And he, you know, it’s unfortunate, but he just left the party. He’s going to be doing his independence party from Minnesota. And he’s a terrific guy and a terrific governor, and he’s got a great future. And I’ve always said, Matt, that I would run if I thought I could win, and in order to win…

Two months into his campaign, Trump publicly said that he did not want Duke’s support.

Trump was asked Wednesday about Duke’s praise, and he distanced himself from the White supremacist.

When he was asked whether he would flat-out reject Duke’s support, Trump replied, “Sure, I would if that would make you feel better.”

Not long after winning the presidency, Trump disavowed the racist elements of what the mainstream media termed the “alt-right.”

“I don’t want to energize the group, and I disavow the group,” Trump told a group of New York Times reporters and columnists during a meeting at the newspaper’s headquarters in New York.

“It’s not a group I want to energize, and if they are energized, I want to look into it and find out why,” he added, according to one of the Times reporters in the room, Michael Grynbaum.

“Racism is evil — and those who cause violence in its name are criminals and thugs, including KKK, Neo-Nazis, white supremacists and other hate groups are repugnant to everything we hold dear as Americans,” Trump said in response to the attacks in Charlottesville, Virginia, over the weekend.

“Those who spread violence in the name of bigotry strike at the very core of America,” Trump said.

Cheerleading for Israel: All the Usual Criminals Are Doing It
There's Nothing Wrong With Racism (Except the Name)
Wisconsin: University Offering Course on "The Problem of Whiteness"
Trump Not in Charge? -- US Agency to Transmit "Overthrow Orban" Propaganda to Hungary
Science Book Proves Racism Is Wrong: Primates and Prejudice
Memorial Day Memories
Trumpery Cubed
Chinese Racialism is a Massive Force Multiplier
Tags:David DukeDonald TrumpRacismWhite Traitors

Yep, Trump has been in the pipeline of (((selected))) candidates for a long time. All he’ll be good for is (maybe) some tax savings as a bone thrown to his blind supporters. Definitely not a friend of the movement.

“The medals will be presented to the recipients, all either naturalized or native Americans…” LOL I can’t believe the New York Times actually classified the White award winners as “native” Americans. It’s actually true, but I still had to laugh.

I should ask myself, then why Dr. David Duke praises Trump.
Sometimes it’s very hard to know which one is really controlled opposition. How deeply the Jews infiltrated. It may be called a ‘Fog of war’.