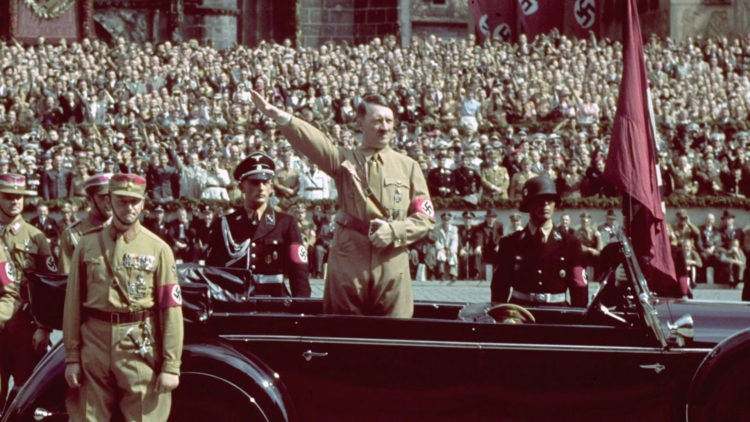 LAST JULY I exposed a speech ostensibly composed entirely of Hitler quotes as being composed mostly, in fact, of fake Hitler quotes.

The debunking of fake Hitler quotes seems to be a never-ending task, because people are inventing new ones. One of the fake quotes that I debunked was this:

“It’s not the truth that matters, but victory.”

That fake Hitler quote is from a novel, Mist of Love, Fog of War by Alain J. Zgheib, published only in 2016. From the same novel, we have this:

“And the victor will never be asked if he told the truth.”

The fake quotes from that novel spread very quickly. I have encountered them several times.

According to Snopes, this is also from a novel:

It is from a slightly older novel, Pat Miller’s Willfully Ignorant from 2014.

The propagation of a fake quote like this raises some questions.

One could ask about the thought-processes of the person who decided to take a sentence from a novel and to misrepresent it as a quote from Adolf Hitler. Obviously such a person has no scruples.

More important, however, is what it says about the people who readily embrace such a misrepresentation.

In the first place, it shows that, despite the obsession with Adolf Hitler in popular culture, much of the general public knows practically nothing about him. They never perused Mein Kampf to get a general idea of what Hitler said — which is rather the opposite of what is attributed to him here. The whole spirit of Mein Kampf is blunt and honest.

Furthermore, it suggests that they are still under the influence of old war-propaganda alleging that Hitler presented in Mein Kampf theories about how to deceive the public. Anyone who investigates what Hitler wrote will find that he warned against the Big Lie as a tactic of the Jews. But the vast majority of people will never check, and the few who have checked either could not or would not obliterate that false belief.

Dinesh D’Souza, in his public presentations about his idiotic book The Big Lie, speaks as if Hitler had advocated the Big Lie. D’Souza indicates in his book that he knows better, but for whatever reason he chooses in his public presentations to conform to the old, false propaganda. The fact that he can do this in presentations at universities without suffering embarrassment is remarkable. Perhaps the people who recognize the deception just don’t want to be seen defending Hitler. (Many of Dinesh D’Souza’s followers however are simply stupid.)

The belief that Hitler would have written such statements in a book for publication also shows an utter lack of critical thinking. The statement resembles something from The Protocols of the Learned Elders of Zion, which was alleged to be a secret document that ended up being published only because it was leaked.* There is no similar background story to explain how such admissions from Hitler could become public. We are supposed to believe that Hitler deliberately wrote down his evil intentions and had them published. People are just not thinking.

* Incidentally, Protocols is clearly not an authentic document either, although, unlike this statement attributed to Hitler, it at least has some resemblance to the truth.

Dietrich Eckart -- Poet, Mentor and Martyr
Maurice Bardèche on What Is and Is Not "Fascism"
The Myth of the Big Business / Nazi Axis
"Scientists" Lie About Transgenderism
Adolf Hitler as the Exemplar of Indo-European Ideology
Fake Hitler Quotes in a U.S. Army Film
Fake News and Fake Intelligence Are the Neocon Stock-in-Trade
Fake Intelligence Supports Zionist Warmongering
Tags:Adolf HitlerLiesMass Behavior

It is and has been a common occurrence for Hitler to be misquoted. I have seen this so many times over the last forty years that I expect it, not just in fiction, but also in so called documentaries. The History Channel is one of the worst offenders in this regard.

When it comes to history and science, I never take anything seriously unless the information, especially if it’s statistics or a personal quote, is cited. Even then, I expect primary sources to be provided, not secondary or tertiary. People who are too lazy to cite their sources have no credibility and in most cases, have something to hide…like the truth. There is also a quote by Goebbles where he refers to telling a lie over and over again until it’s perceived as the truth that’s probably the most misrepresented quote in existence. No one EVER prints that full quote wherein by saying such a thing, he’s referring to the jewish method of deception, not a practice of the Reich, but by printing the quote in a truncated form, the opposite… Read more »

I agree with your statements about Hitler, Hadding, but not regarding the Protocols. In my opinion, the simple fact that practically EVERY PROTOCOL has been carried out – or is in the process of being carried out – is beyond coincidence and proof that there is something legitimate about this diabolical screed.

Are you saying that Hitler didn’t say this sentence ?

“And the victor will never be asked if he told the truth.”

I think it is not clear in your writing above. Since I am translating some videos on Hitler into Korean, it will be appreciated if you teach me exact source. I thought Hitler said that sentence to alert German people about danger of the Jews.

You know, that sentence is introduced at the beginning of the famous documentary “The Greatest Story Never Told” as told by Hitler.

Protocols of the Learned Elders of Zion are 100% real and they are only the record of one meeting nearly 100 years ago. Merely a glimpse at how advanced the enemy of all other people actually is in their diabolical unwavering determination to rule the world. The people of the world sadly have earned the description of cattle they so enjoy calling everyone. The unconscious robotic masses auto piloting blindly through their lives. All politicians swear allegiance to Israel above their own countries all across the world. This is a fact. They are all masons and they swore this oath before they even were considered for office by the Learned Elders of Zion. Those few that do not submit are subject to endless wars that leave their countries smoldering ruins.… Read more »

It is a bit of an understatement to find only a few lines of fake quotes from Hitler when there are volumes of lies spewed endlessly about him and his accomplishments and failures.

It seems the best we can hope for currently is clarifying a few false quotes from shill authors paid by the enemy.

The Greatest Story Never Told has a number of falsehoods in it. The claims made in clips from professional documentaries (which constitute most of it) are reliable. The claims made in text, or in sound-clips from podcasts, are sometimes accurate, sometimes not. In particular I recall that there was a story about a German POW who walked home to Germany from a GULAG; this story was exposed as a hoax long ago. If Dennis Wise put a quote from a novel at the beginning of his video then he made a big mistake, but it’s not the only mistake. If you’re shocked to find out that the quote is fake then you’re a little naive. Fake Hitler quotes abound. On the Protocols. The fact that the content correlates to reality… Read more »

“One can reliably assume that most American politicians are dominated by Jewish power and are controlled puppets, especially any President after Nixon.” – Adolf Hitler