What Right Does the “Free West” Have to Lecture Hungary? 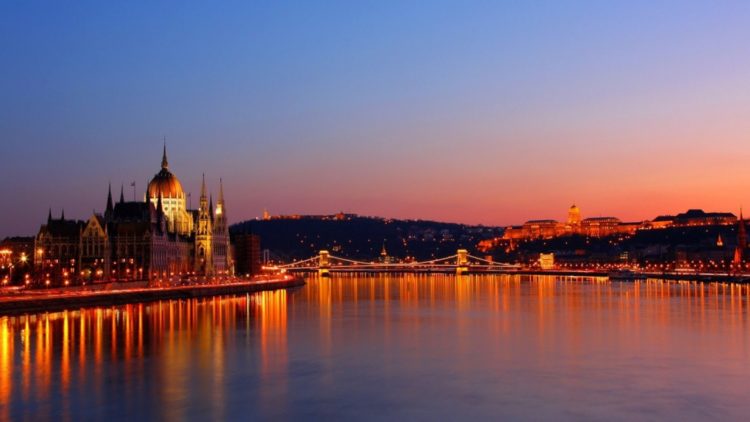 AS A SMALL BOY growing up in the West I held it as axiomatic that ”The West” was superior to every other part of the world. When a western leader or person of influence excoriated the USSR or China or Cuba or the Middle East, it seemed morally justified, their criticism held weight, it mattered.

Reading an article from The New Statesman’s ”long reads” section last week with this headline:

I pondered: by what metric can a Left Wing Globalist magazine, or the EU’s ruling class, claim moral superiority over Hungary or Orban, or anything else? In 1989 the West could pillory China over the Tienanmen Square massacre because neither European or North American governments were in the habit of running people down in the streets with tanks. What’s fascinating about liberal European criticisms of Orban and Hungary is that every last one of them can be turned around and fired back at the European liberal classes themselves.

They claim that his government rewards loyal oligarchs with state contracts, many financed by EU development funds, and that Orbán seeks to gag the independent media, packs key institutions that are supposed to be politically neutral with supporters, crushes dissent and vilifies opponents.

When you read passages like that the stunning scale of the hypocrisy begins to settle in. It goes without saying that that’s a perfectly valid description of any government in western Europe and of the EU itself. Their problem is not that Orban is corrupting Hungarian institutions, Europe’s liberal classes, and their (((backers))) do that relentlessly, their real problem is that Orban is doing it for the wrong reasons, such as…

Orbán’s government exhorts Hungarian mothers to have more children (marriage is restricted to heterosexual couples). The preamble to the newly rewritten constitution talks of “an abiding need for spiritual and intellectual renewal” after the “moral decay” of the 20th century. It declares: “We believe that our children and grandchildren will make Hungary great again with their talent, persistence and moral strength.”

Orbán has been content to trample on democratic norms to achieve that goal. In a notorious speech in 2014, he boasted of “breaking with the dogmas and ideologies that have been adopted by the West” and held up China, Russia and Turkey as models of successful states.

It is not my purpose here to defend Victor Orban, but rather to call out the hypocrisy and lies of the grandstanding hypocrites of ”The West”. That said, when Orban talks about ”breaking with the dogmas of the West” it’s a fair bet that one of those dogmas is the mentality behind using scare quotes to describe policies seeking to increase the native birth rate and imbue those people with a sense of pride and self worth, purpose and belonging. 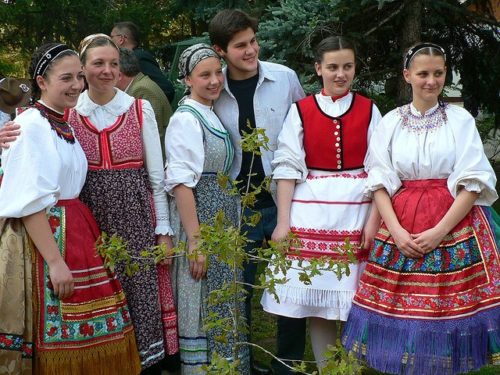 Maria Schmidt, a friend and ally of Orban explains further:

“Because there are just ten million [Hungarians], we can’t accept that 10 per cent of our population are people we don’t know anything about or what their intentions are and can’t be integrated,” Schmidt told me, adding that some would inevitably be terrorists. “Also, in contrast to former colonial powers, we don’t have any sense of guilt towards them. We never colonised them, never bombed them. We have nothing to make up for.”

Orbán, she added, was being unfairly demonised for daring to oppose liberal orthodoxies about immigration and political correctness. He would be remembered as “one of the most significant and influential shapers of Europe”.

Such logic certainly has my support but the Western European liberal elite have Orban’s Hungary firmly in the doghouse, for a European leader to entertain such ideas puts him in the ”Rogue nut” category, why couldn’t they be more like EU liberal poster children such as ”humanitarian superpower” Sweden? or Germany, or France?

You see, this is essentially their argument, Hungary is bad, Sweden and Germany are good. And so I go back to my original question, by what metric is that to be measured?

“Do you want to be remembered as somebody who liberated your country from communism?” Verhofstadt asked during that debate in Brussels. “Or do you want to be commemorated as an eternal enemy of our open European democratic society?”

Here is a recent picture taken of Sweden’s second city, Gothenburg, the very model of ”Open and Democratic Europe”: 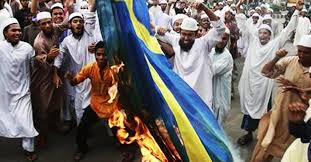 And here is a recent picture taken in Hungary’s second city, Debrecen: 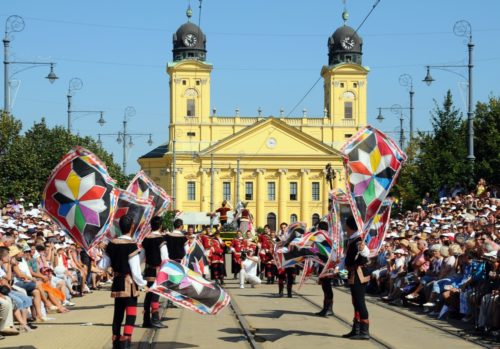 Ah, but it’s a facade you see, it might well seem an idyllic scene of traditional Europe, but behind the scenes it’s oppressive, something sinister is going on:

At the same time, Orbán’s government has turned the state-owned media into what Gábor Polyák, the head of the NGO Mérték Media Monitor, calls a “propaganda machine”. It hobbles the independent media by withholding lucrative state advertising and using friendly oligarchs to buy hostile television stations, newspapers and websites.

However, the point here is that Europe’s liberal poster children are not just being demographically annihilated, raped and bombed into oblivion, they’re being hunted down for resisting it! Germany is a country with ”Facebook Raids” wherein Germans who object to their own genocide by stealth are locked up for posting those objections on social media. In Britain people are jailed for leaving bacon on mosque doorsteps, and in jail they mysteriously die and the media never cover it, and then there’s the terror attacks and rapes.

The fact is somebody such as Guy Verhofstadt stands atop a mountain of raped and butchered European corpses and sneers at Hungarians for not wanting to join in the massacre of its own citizens as a moral good. They talk about ”Open and Democratic Europe” (notice they’ve dropped the ”free”) while doing everything within their power to crush the Brexit vote.

They accuse Orban of subverting democracy because he refuses to allow a Jewish oligarch such as George Soros to subvert democracy, they howl with outrage at Orban crushing dissidence while admitting protests are allowed in Hungary but not mentioning that western European dissidents are hunted down and destroyed by NGO backed far Left terror groups such as Hope Not Hate and Anti-Fa.

And they do all of this with a holier than thou air, a sense of insurmountable moral superiority, but even that’s a lie. What we think of as our ”Liberal Elites” are, when it comes down it, the heirs to a brand called ”The West”, at some point that brand was subverted. The equivalent would be Coca Cola dripping arsenic into their recipe but maintaining that their brand was as good as ever, lap it up you pigs!

The liars and fraudsters we have running our countries now are essentially flogging a brand and the moral capital it carries, while pretending the bait and switch con-trick never took place.

They look upon the homogeneous holdouts in Eastern Europe as anachronistic backwaters while 15,000 combat ready soldiers patrol the streets of France and ask ”How dare you, you monsters!” while hoping that nobody will see the true nature of the zombified ”West” these parasites have created, that nobody will see that the brand ”The West” isn’t exactly what it once was, but luckily for them…consumer objections have been ruthlessly suppressed.

Europe: A House Divided
Democracy of Hypocrisy
The Morality of Survival
Cathy and the Abdication of the American Ruling Class
Hungary Offers Serbia Help in Guarding Borders Against Invaders
Being Nice versus Being Right
So, Who is Really Running this Sideshow?
Hairgate
Tags:HungaryHypocrisyViktor OrbanWestern Civilization

The Debate That Was Killed (Because I Was Winning) 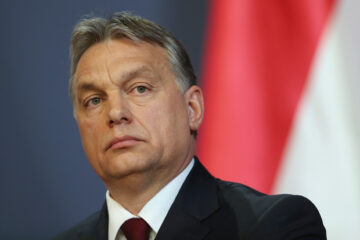 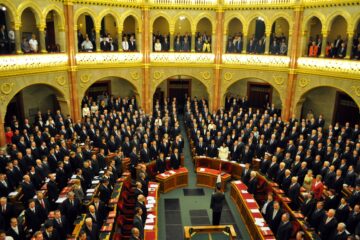 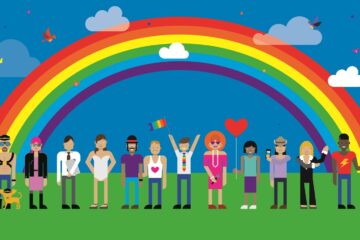 The real (i.e. Jewish) purpose of the foundation of the European Union is White Genocide. Prosperity by economic cooperation was the first bait. Then peace by political cooperation, which meant in reality more and more centralization of power in Brussels. Member states of the EU are now supposed to be vassals of the (unelected) elite in Brussels. To erase the ethnic identity of the European peoples the free traffic of persons in the EU was installed (Schengen Agreement). Finally, to destroy the White Race in Europe entirely, mass immigration of non-Whites was organized, first as “necessary” guest-workers, now as “refugees”. Resistance to this indirect genocide is condemned as racism (“incitement to racial hatred”) and severely punished. All leaders of the West European nations are part of this plot, but a… Read more »

What Right Does the “Free West” Have to Lecture Hungary?