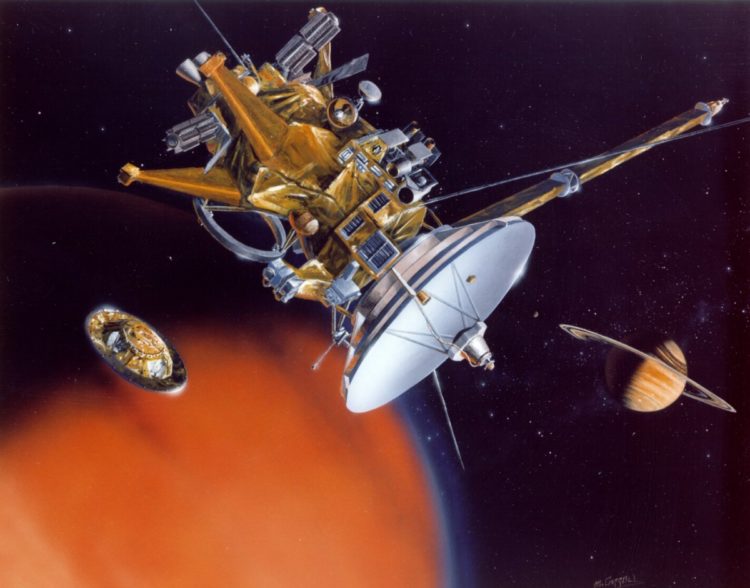 Did Political Correctness intrude itself at the end of this great mission of Aryan Man? Most impressive is the overwhelming Whiteness of the crew, even in this age of racial degradation.

NASA/JPL HAS DONE this sort of thing before, e.g., during the Mars Pathfinder coverage in 1997, in which Blacks were shown standing around (conveniently at the center of a camera’s field-of-view), dressed in suits, and pointing at things, or else sitting at computers and typing on a keyboard, or else carrying papers down a hall past the doorway of an empty room that just happened to have a camera in it pointed at the said doorway, and so on.

I believe that the same subliminal propaganda was in play during the recent final minutes of the end of the Cassini mission at Saturn. These comments are in regard to a video titled “Cassini End Of Mission (Final 7 Minutes Till Loss Of Signal), posted to YouTube on 15 September 2017.

The video begins with a female Asian (heard from 0:00 to 0:12) giving a brief status report and introducing a White JPL scientist, who presented a detailed description of what was going on (heard from 0:13 to 0:46).

Room and intercom chatter, including a subsystems status report, is heard from 0:47 to 2:08.

By far the great majority of people in the room are Whites. There are some Asians among them, and these Asians seem to belong there. No special tricks with timing, camera angles, and lines of sight are used to show them, excepting the female Asian mentioned earlier.

At 2:25, a White man wearing a dark blue shirt turns to look through an entrance located beyond and behind three rows of station monitors, most of which (but not all) are filled by White NASA/JPL employees working on the Cassini mission.

At 2:40, the White man in the dark blue shirt, standing beside the male Black and having his attention, points at a station monitor at the far end of the rear row of stations with his right hand.

At 2:42, the White man appears to invite the male Black to take a closer look at the computer monitor, which is at the end of a row of similar monitors, except that it is one of very few in the room having no one sitting at a chair behind it. The male Black is bending over as if to study what is being shown on the monitor, keeping his arms crossed as he does so.

The male Black and the White man in the dark blue shirt remain hunched in apparent fascination by the monitor until 2:47, when the camera angle shifts and they are no longer in the field of view.

At 2:58, the camera angle shifts again showing the entrance way — the White man in the dark blue shirt, and the male Black, who is standing at the entrance corner, still with his arms crossed.

The male Black never actually does anything. He became visible while the camera was pointed at the entrance he came through, and the camera remained pointed at him long enough for him to be associated with a vacant station monitor that he never used, and to which he was guided by the White man standing beside him.

At 3:26 the camera zooms out to show a female Black sitting at a station at the near end of the front row of stations. The zooming goes no farther than necessary to include her face in the camera’s field of view. She can be seen until 3:33, when the camera changes angles once again.

The female Black again appears, again at the edge of the camera FOV, at 4:47. You can barely see the forehead and nose of a White man who is sitting even closer to the camera than she is, but the female Black is the nearest person who can be seen clearly.

Indeed, at 4:56, another cameraman occults the White man’s partially seen face with his own camera, while the female Black remains unobstructed by the camera. The scene shifts to a readout of the signal from Cassini at 5:14.

At 5:24, the scene shifts again so that the female Black’s face is clearly visible at bottom left, while the male Black is seen just right of top center, still standing by the entrance with his arms crossed.

At 8:58, a few seconds after the Project Manager called the end of the Cassini mission, and after the camera has panned back, the female Black moves to position herself in the camera FOV at lower left. She is standing, but she isn’t trying to associate with anyone else.

Very subtle programming. Fits right in with the “Hidden Figures” narrative.
One gets the impression that, because the people in the clip appear to be majority-White (granted, including some Asians), and because only two Blacks are shown, that there are likely even MORE Blacks who are perhaps “hidden” from the television cameras… because of ONGOING “White supremacy” at NASA and (((the media))) in general. At least that’s my take on it.
Blacks who might be watching, as unlikely as that is, would surely be saying to each other “See, my nikkaz?! Dem crackas STILL be tryin ta HIDE as many uv us as dey can get away wit!! But dey can’t hide ALL of us, so peoples CAN see a FEW of us mixed in with all dem honkies regardless!”

B-But we KNOW blacks are aerospace geniuses because Hollywood said so in the film, Hidden Figures, right? Right? LOL The NASA film clip is filled with so much obvious racial tokenism that it might as well have been directed by Hollywood, too.

If these kaffirs are so bloody smart, than why hasn’t Africa sent their people into space? That Hidden figures movie, was such rubbish. Bollocks to Hymiewood, and the kikes who run it!!!!