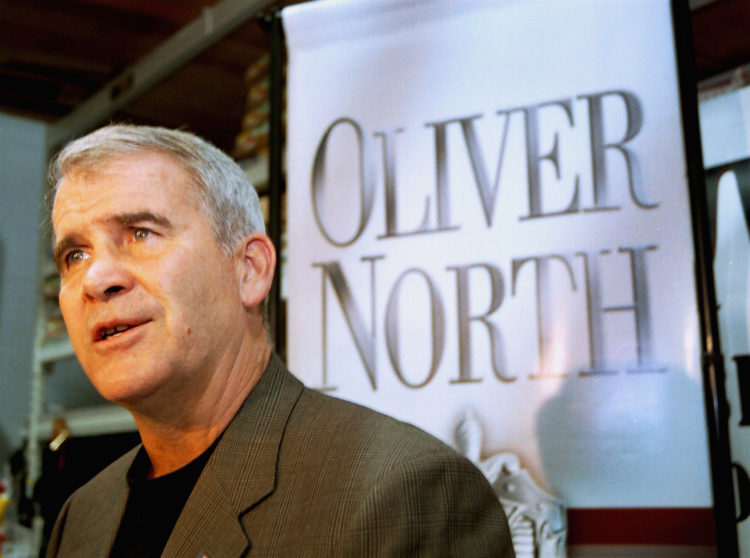 WE MUST SYMPATHIZE with Colonel Oliver L. North, although, of course, we cannot possibly respect him. Indeed, if he had not been a victim of perfidy and injustice, his name would excite only a moment of contemptuous amusement.

Although he probably participated in boyish shenanigans earlier, we had our first view of him when he and his bumbling boss, Admiral Poindexter, having crudely disguised themselves, as boys do when they play detective, sneaked into the Near East as special envoys, sent by the old ham actor in the White House, to deliver to the head of a Moslem nation his gifts, to-wit, a delicious cake and a copy of the Christian Bible with a quotation and signature personally inscribed by old Ronnie. The gifts may also have included a baseball and bat, and a sack of peppermint-stick candy, but there is no record of them.

It would seem that the purpose of that diplomatic mission was to deliver a gratuitous but calculated insult to the Moslem president, but the level of mentality displayed by all concerned is so low that we may think the overgrown boys hoped to convert the Moslem to Christianity and so make him aware of his duty to surrender his country to Yahweh’s Yids.

The episode reminded my older readers of a delightfully comic film, “The Diplomaniacs,” in which similar diplomacy had been enacted by the team of Wheeler & Woolsey, who were able to produce exquisitely ludicrous episodes without the noisome Yiddish vulgarity of their rivals, four Sheenies called Marx, doubtless in pious memory of Karl.

The boy colonel and his callow superior bobbed up again as Ronnie’s agents in a complicated scheme to use in the interests of the Jews the Communist vermin whom the C.I.A. had installed in Nicaragua as part of the long-term plan to encircle the United States before openly occupying it.(1) The unfortunate people in Nicaragua who were trying to resist the local Bolsheviks were to serve as a pretext for further enriching Kikes in the armament business by paying them to supply weapons and munitions to Khomenei’s Iranians and thus encourage them to continue their war against Iraq, a Moslem state that is an obstacle to the Jews’ plans to annex all of the Near East to their Holy Land.

(1. It is now conceded that the C.I.A. engineered a couple of assassinations and subsidized a revolt to overthrow the Somozas, who had made Nicaragua as nearly stable and civilized as a mongrel country can be. I have some independent knowledge of the Somozas: a friend of mine was a classmate and friend of the Somoza who was educated at Northwestern University. Cf. Liberty Bell, October 1988, pp. 15-17, and the cited book by the younger Anastasio Somoza. Mr. Taylor, in the pages of Liberty Bell, accused the Somozas of tolerating Jewish predators in Nicaragua, but that was obviously the price they had to pay to avert American intervention for so many years. When the family was overthrown, there was the usual gabble about the ‘democracy” and filth that Americans love, but the C.I.A.’s purpose must have been to prepare Nicaragua for Communist occupation, so that it could serve as a base for a Communist take-over in Mexico, thus closing one jaw of the nutcracker on the American nut.)

The international intrigue was so ineptly managed that, as everyone knows, it became a scandal which gave to some ambitious politicos in the Jews’ Congress in Washington an opportunity to make noises and get their names in the newspapers. To what extent North was responsible for the blunders is uncertain, but on his behalf it may be said that part of the responsibility must fall on the persons who selected him for a task for which he was intellectually incompetent. He, like Ronnie, was given to babbling about “Bible prophecy” and “Armageddon” and “God’s plan for his Chosen,” and similar nonsense, and no man whose mind is filled with childish fantasies could be competent to carry out a clandestine mission in the real world.

Old Ronnie did not have the manhood to avow his part in the transaction that had been made scandalous, and some of his subordinates, including the authors of two books I have noticed in these pages, hastened to pretend that the old actor was innocent and had been deceived by the wicked team of Poindexter & North. What was worse, Ronnie was such a craven coward that he did not use his power to pardon his agents and thus save them from prosecution and persecution.

One sympathizes with an agent, however stupid, who has served a superior unworthy of him and suffered accordingly. One sympathizes with North even more because he was denied his right under the Constitution (to which lip-service is still given by the aliens and traitors in Washington) to a fair trial. Under the Constitution and under all Anglo-Saxon law since the Magna Carta, North was entitled to trial by a jury of his peers. Instead, according to all accounts, he was convicted by a pack of niggers, who used the opportunity to enjoy comfort and importance as long as they could.

Ever since that grotesque show trial I have felt sympathy for Colonel North, and I still do, although some member of his staff has picked me as sucker.

I have received a printed letter signed by Oliver L. North, in which he avers that he has done a lot of praying, by which, I suppose, he means that he talked to the clouds or the infinite void beyond them, and took some quirk of his glands for a reply. He avers that he believes “that, in the providence of God, nothing happens by accident to those who have committed their lives to Him.” On this basis, he deduces that “His purpose” in afflicting him with all the tribulations he has undergone (and to do that, the omniscient god must have contrived the whole mess, perhaps including — who knows? — the civil war in Nicaragua) was just to give North a hint that he should found another play-pen for simple-minded “conservatives,” and beg them for $25.00 or more a head.

I think that the boy colonel probably believes what he says, and I am still sorry for him, although I reflect that, given belief in so vicious a deity, who accomplishes his purposes by a kind of Rube Goldberg mechanism and wreaks havoc on thousands just to kick his votary hard enough to give him a hint — given belief in such a god, Aryan manhood would elect to perish as did the younger Ajax, defying the lightnings and the tempests of the gods who slay him.

I do not know how many hundreds of “conservative” and “anti-Communists” Alliances, Legions, Crusades, and the like have been launched during the past half-century and have wasted the money that hopefuls contributed to them. Two or three, perhaps even four or five, were founded by men (Major Pease, Colonel Hadley, et al.) (2) who had a conception of what was really at issue and hoped their organizations would grow to the point at which they could be used for a serious purpose. Quite a few were founded by men and women who, still intoxicated by the prevalent illusions, naively though they could rally “Christian patriots” to fight what was, after all, a hobgoblin, and never perceived who were their real enemies. And many were founded by shrewd promoters who profited from Barnum’s discovery that there is a sucker born every minute — a dictum which must be honored as sound sociological research, even though Barnum grossly underestimated the birth-rate.

(2. I exclude from consideration here Robert the Welcher’s Birch promotion. I gave some account of its origins in America’s Decline, mentioned its later stage in Liberty Bell, May 1985, and intend to write its obituary and have done with it in some future issue.)

After all these years and decades of continual futility and frustration, I can only marvel there can still be found Americans who will pay to chase will-o’-the-wisps around the Dismal Swamp called the United States. But there are such. “Conservatives” and “Christian patriots” seem never to learn from past experience, and, although it is impolite and unkind, one cannot help seeing an analogy with fish, who, after centuries of collective experience, still bite hooks concealed in wriggling worms.

Thus there may still be a place for North’s Freedom Alliance, which is going to promote national defense, support freedom throughout the world (!), maintain “traditional Judaeo-Christian values,” and so on and on. I won’t list the rest of the objectives; you must have memorized them, having read them in a hundred begging letters.

So, if you want to join the boys and girls for another jolly romp on the playground, just send $25.00, or as much more as you want to throw away, to Oliver North’s Freedom Alliance, P.O. Box 96700, Washington, District of Corruption, 20090. But if you are the kind of person who will do that, why are you now reading adult “literature”? Liberty Bell is for adults and only adults who have the courage to face the terrible and mind-withering reality of the present, and, by understanding it, compute the relative chances of the possible ways in which some genetic nucleus of our race can survive the suicide of the Christianized majority.

Is There Intelligent Life on Earth? (part 13)
The African Plague
On the Germanic Peoples
Playboys at Work: Forgeries in Science and Religion
A Neat Problem
Teaching Them to Kick Us Harder
Our Jewdicial System
Of Quacks and Quackery, part 1
Tags:Liberty Bell MagazineOliver NorthRevilo P. OliverRonald Reagan