EVERYONE HAS NOTICED the prolonged uproar over The Satanic Verses, a book by a wog named Rushdie, who, in the published photographs, looks like a Jew.

The trouble started in a British provincial town, where a thousand or more Moslems rioted. Most of them, no doubt, knew enough English to read street signs, and many probably could make their way through a paragraph in a newspaper, but how many were likely to read almost six hundred pages of constipated prose by an “anti-Fascist intellectual”? How did they happen to hear about the book? Any enterprising publisher would have seen an opportunity to set off a firecracker that would make a “best seller” out of a schizophrenic tome that would titillate “Liberal” reviewers but was sure not to become popular and which he might otherwise soon have to “remainder.”

However that may be, the affair was scandalous, although no one seems to have noticed why it was. What were the thousand or more Moslems doing on an island that theoretically belongs to the British, who, presumably, are either Christians or rational? Why did not the police round up the rioters and escort them to the nearest port, where the English, if they wished to show their wonted generosity, could provide them with free passage to their homelands? Of course, one has only to look at Prime Ministress Maggie and her Kikish Cabinet to know the answer to that question, but that does not make the fact less scandalous.

Then in Iran the ruling Hajji Baba, in a real or simulated rage, offered a million for a quick assassination, evidently being so ignorant as to think that the book contained something remarkably derogatory to the Prophet whom he claims to represent on earth (although the majority of Moslems regard him as a vile heretic). If that book was enough to set him off, his enemies have an obvious opportunity. Just send him a dozen or so of the scores of sound historical studies of the origin of Islam now in print. He will explode apoplectically and the world might even be entertained by a real example of the spontaneous combustion described in Dickens’ novel.

The warlock’s conniption fit gave every pseudo-literary hack an opportunity to declaim about the horrors of censorship by goyim and the imprescriptible right of every writer to say what he pleases, so long as God’s Race does not object. (1)

(1. Big-brained “intellectuals,” busily engaged in defacing and sapping Western civilization, know that, if they are members of the lower races, they must fawn on the Master Race and frantically wag their tails. It is simply apodeictic to them that no Aryan can be permitted freedom of speech to defend his own race or question Yiddish hokum, so, naturally, the loud-mouthed gabblers who made themselves conspicuous with bombastic (and supererogatory) defense of Rushdie never even thought of protesting the vicious censorship that Jews now excise over almost all publishing. The contrast is so glaring that even in the pages of The Nation, a periodical whose readers must often wonder to what nation the title refers, Alexander Cockburn was permitted, in the issue for 20 March 1989, to point out how the Jews use incendiary bombs or corrupt courts to persecute Aryans who dare question their absurd Holohoax; how they used financial finagling to suppress even a book by Noam Chomsky; and how the pavid editors of The Nation insisted on censoring from one of his articles a mildly approving reference to Professor Israel Shahak of Hebrew University, whose veracity offends the rulers of his race. But all that suppression of intellectual integrity, to say nothing of freedom, never evoked a squeak from the intellectual lions who roared so loudly for Rushdie’s freedom of speech, when they pretended it had been endangered by a vain threat that probably will net him a million in royalties.)

I was sufficiently curious to find a copy of the book whose author old Khomeini unintentionally endowed with at least the better part of a million dollars, and I glanced at a few pages. Yes, just a few pages, for I remind you of William Dean Howells’ aphorism that it is not necessary to eat all of an apple to learn that it is rotten.

Even if there had been no screaming, The Satanic Verses would probably have set “literary circles” in New Jerusalem-on-the-Hudson atwitter for a whole week, as each “intellectual” tried to show that he had read the latest masterpiece (or a review of it by a wise guy) and hastened to get in a word about it before it ceased to be the latest thing and no fellow littérateur would remember it. It will delight people who mistake incoherence for sense and think profound anything that is incongruously grotesque. It will fascinate the kind of nitwits who are enraptured by a piece of canvas that has been dirtied by Picasso, Chagall, or some comparable exploiter of feather-weight poseurs.

This is not to deny that the author may have been sincere in some part of his painfully long and disjointed book. I may have chanced upon the most significant passage, somewhere near the end, but it raises a problem.

The author may have read Carl Sandburg, a passable folk singer who passed for a poet long ago, when vers libre was the dernier cri, and did put a few good phrases and similes in his scrappy prose. If my recollection has not been dimmed by many years, Sandburg, enlarging on an earlier author, once wrote that he had a whole zoo inside himself. Since I know nothing about his ancestry, I cannot comment; he may have done no more than find a startling hyperbole for what is commonplace.

Every sane Aryan who has passed the age of six knows that he has conflicting desires and will have always to choose between alternatives that are equally attractive. He will have to decide whether or not he will trade his prized jack-knife for the neighbor boy’s skates, and comparable dilemmas will confront him in all of his ten thousand days under the sun. He will have to decide whether to marry some lovely girl and perhaps burden himself with children or retain his social and economic freedom as a bachelor. He will have to decide whether to buy a new suit or a new overcoat; whether to spend a small inheritance or a bonus for a fine automobile or travel in Europe. Every virile man wants to seduce every very attractive woman he encounters (although few confess that as freely as did Thomas Wolfe), but, assuming that he can easily do so, he may have to choose between that strong desire and the conflicting desire to observe obligations inherent in his personal situation or in the code of gentlemen.

Hercules, in Xenephon’s well-known apologue, had to choose between two divergent paths; every man is confronted by less drastic but equally perplexing choices between antithetical desires almost every day — perhaps until at an advanced age he makes the final choice between liberating himself from intolerable burdens or unbearable pain by suicide and continuing to live in the hope of fulfilling some obligation of honor he has assumed.

Sane men know this aspect of the human condition and take it for granted. Only in schizophrenia can a man’s mind and personality become so disintegrated as to make it seem that he is more than one individual — that he is not a man but a zoo. (2)

(2. Schizophrenia is especially common among “mental health experts” and psychiatrists. I remember one who, hoping for support in taking over a “right-wing” operation, wrote me hundred-page letters, in which he explained at length how his Id was always fighting with his Ego and how hard it was for the third piece of himself to keep peace in the rough-house inside his skull. This psychotic condition is probably the result of incompatible genetic strains, although it may be exacerbated by morbid introspection or the use of hallucinatory narcotics.)

The author of The Satanic Verses, with or without imitating Sandburg, wrote (I correct spelling and punctuation):

Oh, the dissociations of which the human mind is capable!… Oh, the conflicting selves jostling within these bags of skin! No wonder we are unable to remain focused on anything for very long; no wonder we invent . . . channel-hopping devices. If we turned those instruments on ourselves [!], we’d discover more channels [within us] than a cable or satellite mogul ever dreamed of.

Assuming that Rushdie means what he says and finds “conflicting selves” (something quite different from conflicting desires) within himself, the most likely explanation is obvious. He is some kind of hybrid, a living example of multi-racialism, (3) and, like many such unfortunate persons, he may be scatter-brained and suffer from mental strabismus and the conflict of the incompatible instincts of the different races that contributed to the unnatural and unstable mixture that his conscienceless parents made of him. But you may be sure that the twittering intelligentsia of “literary circles” will think the passage profound instead of pathetic, and will claim it refers to some constant of human nature to avoid recognizing in it the consequences of the crime of miscegenation, which they strive so hard to promote.

(3. Islam, more than Christianity, promoted mongrelization and there is little pure Arabic blood left in the world, most of it in Saudi Arabia. The danger to the race seems to have been perceived only by Umar (634-644), the second and greatest of the Orthodox Caliphs, who, when he saw the long line of captives taken by his army at Jalula (on the edge of the Persian highlands), most of them not even Semites, is reported to have exclaimed, “O Allah! I take refuge with thee from the children of these captives of Jalula.” Islam cannot be entirely blamed for the disastrous miscegenation that followed; there seems to be no reason to doubt the tradition that Antara ibn Shaddad, one of the pre-Islamic poets of the Mu’allaqat and also renowned as a warrior, was a mulatto and slave of his father until his arm was needed to resist a foray on his tribe. That need not be inconsistent with the aristocratic contempt for slaves and the low-born expressed in his poetry. As a pagan hero, untrammeled by the religion of later times, he was remembered for having risen from slavery to sheikdom, and the little that is known of his life was elaborated into a very long romance, the Siratu Antar, which cultivated Arabs prefer to the Arabian Nights. The Arabic text, which I have not seen, is said to occupy 32 volumes. There is a charming condensation of the basic story by Gustave Rouger, Le roman d’Antar, Paris, Piazza, 1923.)

Conservative Twaddle
The Flight From Reason
The Might of the West
The Norwegian Defence League As Trojan Horse
Thomas Wolfe and the End of the Old America
Vienna: 1,000-strong Protest Against Non-White Invasion
The Spurious Shekel
Europe or Islam?
Tags:IntellectualsIslamRevilo OliverSalman RushdieSatanic Verses 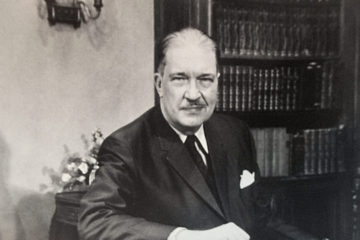 Revilo Oliver: What He Means to Us, part 4

Revilo Oliver: What He Means to Us, part 3